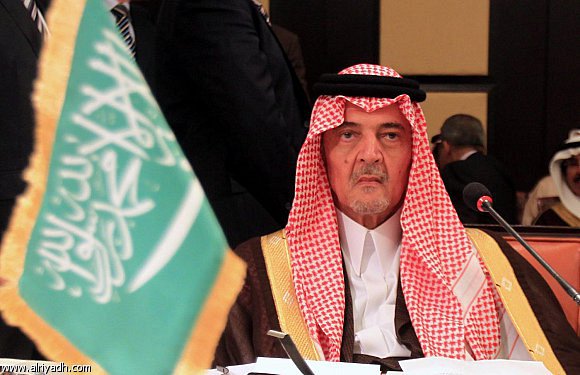 A senior level Saudi information ministry official on Thursday said that Prince Saud had passed away and that an official statement would be published soon.

Prince Saud, who was appointed in 1975, was the world’s longest serving foreign minister when he was replaced on April 29 by Adel al-Jubeir, the then ambassador to Washington.

Prince Saud served under four Saudi kings, advancing the Kingdom’s foreign policy, especially after the attacks of September 11, 2001 in the United States.

He was also part of Saudi Arabia’s efforts to lessen Iran’s influence in the region, including the continuing conflict in Syria, where Saudi Arabia has been supporting several rebel groups.

Asked in early 2012 if it would be a good idea to arm Syria’s rebels, he said briskly: “I think it’s an excellent idea.”

Prince Saud, a son of King Faisal, was born in 1940 in Taif near Mecca, where in 1989 he helped negotiate the agreement that ended Lebanon’s 15-year civil war.

A degree at Princeton in the 1960s was followed by years at the Petroleum Ministry, where he was taken under the wing of his father’s canny and charismatic oil minister Ahmed Zaki Yamani.

His career as a diplomat began traumatically: the new King Khaled named him as foreign minister following the assassination of Prince Saud’s father Faisal, who had retained the foreign affairs portfolio after being made king in 1962.

As the foreign minister of an important political and economic US ally in the region, Saud was reported to have been well liked and respected in diplomatic circles.

Barack Obama, the US president, expressed his condolences to Saud’s family and described him as “a committed and accomplished diplomat”.  The US embassy in Saudi Arabia tweeted the US secretary of state John Kerry as saying that “Saud was not only the longest-serving foreign minister, but was also one of the wisest”.

He was often described as a charismatic leader, willing to talk to reporters, and with a sense of humour.

With age, Saud faced many health problems. In the last few years, despite suffering from chronic back pain and having various surgeries, he maintained his challenging role.

When he was appointed in October 1975, the region was dominated by Cold War rivalries, and secular pan-Arab nationalism seemed to be the future.

Egypt and Israel had not yet made peace, and Yasser Arafat led the Palestine Liberation Organisation from refugee camps in Lebanon. The shah still ruled Iran, while in Iraq a young Saddam Hussein was plotting his path to power.

Riyadh’s relationship with Saddam, which went from wary support during the Iran-Iraq war to fierce enmity after the invasion of Kuwait, dominated foreign policy for long periods during Prince Saud’s tenure.

But despite that complicated history, Prince Saud publicly argued against the 2003 invasion, presciently warning of a chaotic aftermath that could destabilise the region.

“If change of regime comes with the destruction of Iraq, then you are solving one problem and creating five more problems,” he said in a British television interview.

In 2002, he launched Abdullah’s biggest foreign policy initiative, an Arab plan for peace with Israel in return for a withdrawal from all occupied land and a resolution of the refugee problem.

“All the neighbourhood, if you will, will be at peace with Israel, will recognise their right to exist. If this doesn’t provide security of Israel, I assure you the muzzle of a gun is not going to provide that security,” he said at the time.

Israel never agreed to the plan and Prince Saud said frequently that the failure to help create a Palestinian state was the biggest disappointment of his career.