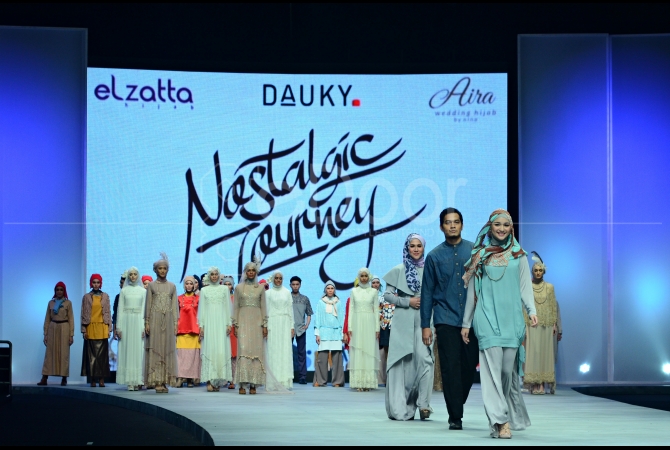 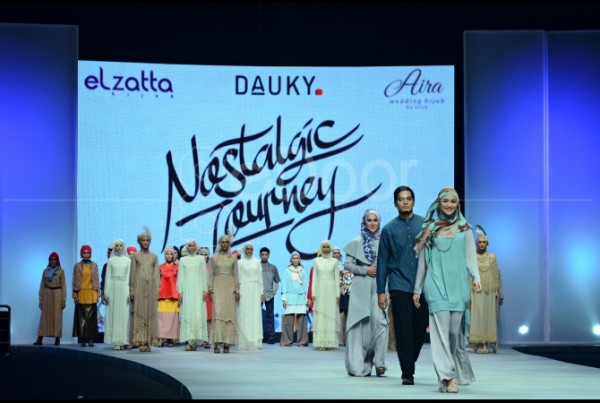 And it’s all for good reason. Some of the biggest fashion houses are located in New York City. Many of the world’s top designers, such as Alexander Wang, Carolina Herrera and Donna Karan live and work in the city whose fashion events influence global fashion trends.

“And I saw for myself the magnitude of New York’s fashion industry. It’s truly huge and dynamic.”

During that brief visit, Elidawati met with representatives of the Nusantara Foundation, a non-profit organization which encourages interfaith understanding and friendship between Muslims and people of other beliefs in the United States.

“They invited us to present our collection on their cultural night,” said Elidawati. “It’s a big honor for us.”

The cultural night, which was held in the Nusantara Foundation’s headquarters in New York, was a success. About 300 people — consisting of Indonesians and Americans of various beliefs — attended the event.

During the event, Elzatta Hijab launched their premium collection “Shades of Archipelago.”

The fall/winter 2015 collection consisted of 24 hijab looks for women. The collection, also recently showcased in Jakarta, was a departure from the usual Elzatta’s casual looks.

“And the competition is really fierce. We have to continuously re-invent ourselves to stay up ahead in the market.”

Elzatta was set up by Elidawati in Jakarta in early 2012 with the concept of simple daily hijabs for women. Within just four years, the company already operates 72 stores all over Indonesia.

“There’s a huge potential for Muslim fashion in Indonesia’s market,” said Ina. “And many fashion brands, local and international, are starting to realize that and launch their own Muslim fashion lines.”

While Elzatta’s previous items are mainly made of jersey, this new premium collection is made of silk chiffon, Shantung silk and taffeta.

“These woven materials allow us to create more elegant structured looks,” she said.

As seen in the fashion show in Jakarta, Elzatta combined an off-white long skirt, beige tunic blouse and cropped mullet top of lime green color. The result was a fresh look that flattered the model’s complexion.

In the fashion show, a model looked adorable in a burgundy tunic, paired with slim-fit pants of bronze. To cover her head, the model wore a checkered green hijab.

“The rule of thumb is those colors shouldn’t be a sore to the eyes when combined together,” said Ina. “And you shouldn’t mix more than three colors [in one outfit].”

The shiny look of some of these materials creates a rather glamorous impression on the outfits.

“You can easily wear [our new collection] daily or while attending formal events,” said Ina.

For head-coverings, Elzatta featured their new hijabs made of poly-spun fabric.

“[Poly-spun] is polyester with cotton feel,” said Ina. “The material is lightweight and breathable. It doesn’t wrinkle easily. And it stays put.”

In the fashion show, these new hijabs were arranged according to the currently trendy, Turkey-style in which the scarves are simply draped around the head and neatly spun around the neck.

“This style really flatters those that have chubby faces and low foreheads,” said Ina.

As seen in the show, the apex of the hijab is rather tall, creating an illusion of a higher forehead. And in this style, the hijab can also be arranged to taper the cheeks and create a thinner illusion on the face.

Some of Elzatta’s hijabs adopt Indonesian’s traditional patterns, including the Kawung (palm-fronds) pattern in batiks and geometric designs in Songkets.

“You may wear a hijab in a totally different color from your outfit, as long as the colors look nice together,” said Ina. “The hijab [with contrasting color] will highlight your look.”

You may also wear a hijab with a totally different pattern from the rest of your outfit, as long as the hijab and the outfit have a similar color.

“Dusty colors will cause their complexions to look dull,” said Ina.

Bright-colored hijabs, on the other hand, will help to light up the complexions of those with darker skin tone.

This new collection will be available in Elzatta’s stores in Indonesia from October 2015.

Elzatta plans to open 40 more stores in Indonesia by the end of this year.

Although the fashion show in New York was a success, Elzatta doesn’t have any plans yet to open a store in the city.

“It would take a very huge investment to open a store in New York,” said Elidawati. “But we’ve had some serious discussions with a partner to open up a store in London, hopefully, soon.”