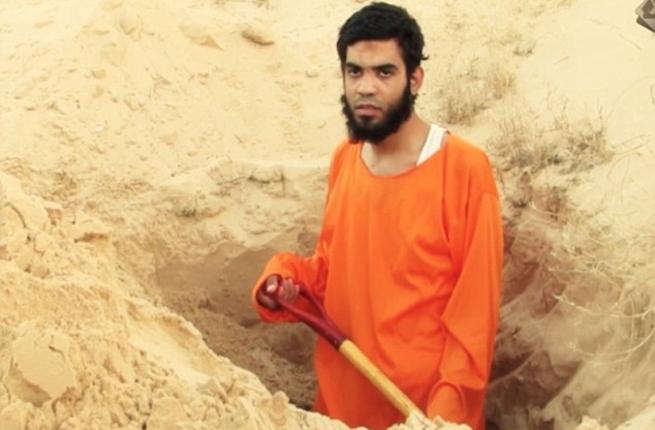 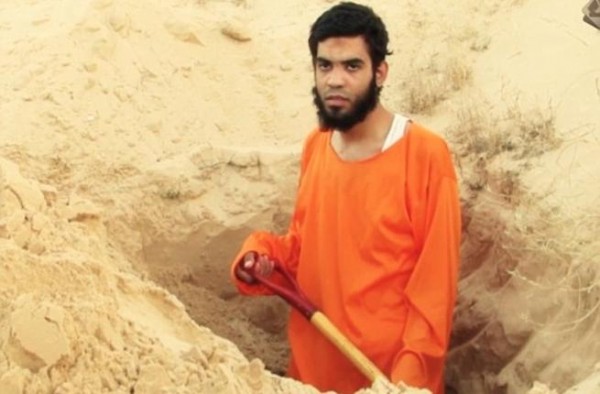 A Daesh (ISIS)-affiliated terror cell operating in Egypt has brutally executed a man they accused of being a Mossad spy after first forcing him to dig his own grave.

Graphic and professionally edited footage filmed in Sinai province shows a bearded man wearing an orange jump suit being shot in the back of the head by a masked Daesh militant.

The shocking video has been widely shared by Daesh supporters on social media, who claim the victim had been operating as a spy in Sinai, reporting back to the Israeli government on activities in the terrorist hotspot.

The gruesome video begins with a highly-stylised montage of the man digging his own grave, before cutting to what appears to be the moment he was arrested.

The man is seen wearing a lilac shirt and frantically speaking on the telephone in Arabic while a masked and heavily armed Daesh militant sits alongside him.

The footage then shows the same man standing in a deep hole in the desert, being forced to dig his own grave while wearing a Guantanamo Bay-style orange jumpsuit as a Deash fighter looks on.

The next harrowing sequence is in slow motion and shows the victim on his knees mumbling to himself while the masked and armed militant stands behind him.

Returning to full speed, the executioner quickly pulls out a small handgun and, without any hesitation, shoots the condemned man in the back of his head.

The final shot shows the victim being pushed into the grave he dug earlier, before his killer uses the same spade to cover the man’s body.

Daesh’s Sinai branch is just one of several small but deadly cells it has operating outside its so-called caliphate in Syria and Iraq, and its 2,000 members are already known to have been responsible for a string of car bomb attacks earlier in the year.

The same group are also known to operate inside the Gaza Strip, being the main representative for Daesh’s interests in the Palestinian conflict.

On Tuesday the group fired rockets in the direction of an airport in the Sinai peninsula used by multinational peacekeeping forces, security sources said, adding that there were no casualties.

The group claimed responsibility for the attack on several Twitter accounts linked to it.

Details of the attack, however, could not be immediately confirmed with some security sources saying the rockets fell inside the airport and others saying they fell outside.