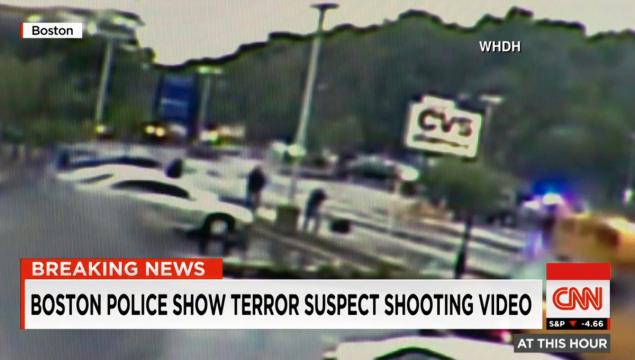 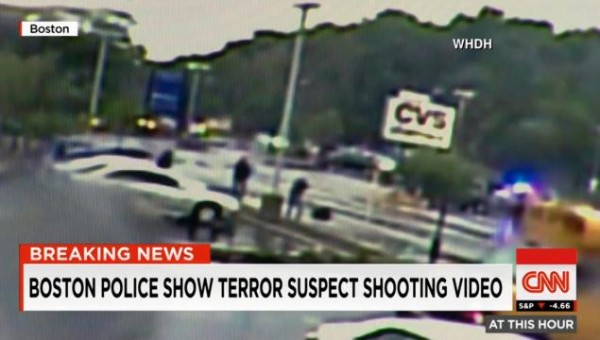 By: Glenn Greenwald and Murtaza Hussain

Last week in the Boston area, a 26-year-old black Muslim man was shot and killed by agents of the FBI and Boston Police Department (BPD). As we documented the following day, major media outlets immediately, breathlessly and uncritically repeated law enforcement claims (often anonymous ones) about what happened: that the dead man, Usaamah Rahim, was on the verge of executing an “ISIS-inspired” or “ISIS-linked” plot to behead random police officers, in a conspiracy with at least two others. When Rahim was walking to work near a CVS drugstore at roughly 7:00 a.m., the officers approached Rahim simply to question him about this plot; in response, he pulled out a “machete” or “military-style knife” that he refused to drop, forcing the officers to shoot him dead.

There were all sorts of obvious, glaring questions about these claims, yet they were largely ignored in favor of ISIS in Massachusetts! hysteria and melodramatic talk of beheadings. That is a profoundly disturbing aspect of this incident: the police can now accost someone in the street who, by all accounts, was doing nothing wrong at that moment, kill him, and then just scream “ISIS” and “Terrorist” and “beheading” enough times and no real questions will be asked.

To persuade journalists to accept their claims, the FBI and BPD insisted there was a surveillance video that would resolve doubts about what happened, claiming that “video surveillance confirmed the officers’ account.” But they didn’t publicly release the video, instead spending almost two full weeks softening and manipulating the public mind by making repeated claims about what the unseen video demonstrated.

The video was finally released on Monday. To call it a joke is to be generous. The camera is 50 yards away from the incident. The lens is obscured with rain drops. The human figures are barely decipherable. No weapons are seen, including any wielded by Rahim. While it does show that Rahim wasn’t shot in the back as his brother originally suggested (and now acknowledges he was misinformed), it shows little else. In sum, it’s virtually impossible to know what happened from this highly touted video, other than the fact that Rahim appears to have been walking peacefully when he was approached by multiple individuals, wearing no police uniforms, in a threatening, military-style formation:

Media outlets that had been touting the video as confirmation of the police version quickly noted that it did the opposite. “Releasing video of shooting spurs dispute,” declared the headline of the Boston Globe, which pointed out that the video “is grainy and shot from a distance through rain … the figures that can be seen are silhouettes, and no weapons are visible … No weapons are visible in the footage, and the initial meeting of the task force members and Rahim is obscured.” The New York Times’s headline similarly noted: “In Blurry Video of Boston Shooting, Officers’ Retreat Is Clear but Knife Is Not”; the article conceded that “it is difficult to make out whether Mr. Rahim, 26, who was under police surveillance at the time, was carrying a knife, as the officers have said.”

So obfuscating is the video that even CNN noticed, observing that while “officials told reporters the footage spoke for itself … Still, it required narration,” referring to the FBI’s press conference (pictured above) where they provided tendentious, step-by-step instructions for how journalists should interpret and describe the “speaks-for-itself” video. CNN also noted that “it’s not possible to make out details — and there is no audio on the video” and that it’s “blurry because of the distance between the camera and the subjects it’s recording.” Rahim’s family issued a statement detailing the numerous questions raised by the video.

Indeed, this video raises more questions than it answers, and the entire incident itself is plagued with all sorts of unresolved doubts about what happened here:

(1) Let’s assume for the sake of argument that the police’s version of the shooting itself is actually truthful. Is it really that surprising — or blameworthy — that someone who is accosted this abruptly and aggressively by five men not wearing uniforms would feel threatened? An unwillingness to drop his knife would just as likely be a byproduct of being provoked (deliberately or unwittingly) with threatening behavior as it would some pre-existing behead-the-police plan. If one wanted to provoke Rahim into some shooting-“justifying” defensive behavior, approaching him this way would be a great way to do it.

(2) Related to that point: let’s accept for the sake of argument the FBI’s claim that Rahim was on the verge of executing an ISIS-linked plot to behead police officers, and they knew this because they had him under 24-hour intensive surveillance, including electronic surveillance of his calls and emails.

Why didn’t they obtain an arrest warrant so they could apprehend him, or a search warrant to find his alleged co-plotters? If they had such clear evidence of his plot, why wouldn’t they have done that? Why risk a public confrontation in which bystanders could be endangered in order to “question” him? If he hadn’t wielded a knife, and had denied any intent to attack police officers, was it their intention to just let him go on his way? The FBI/BPD’s claim — we had proof he was an ISIS-inspired terrorist about to unleash a terror plot — is totally inconsistent with their behavior in how they approached him and with their claimed reasons for doing so.

(3) One of Rahim’s alleged co-conspirators, his nephew David Wright, has been arrested and charged. But he’s not charged with conspiring to kill police officers or carry out terror attacks, only with one count of “obstruction” for allegedly suggesting that Rahim destroy his cell phone. If Rahim had conspirators in his terror plot as the FBI continuously alleged, why haven’t any of them been arrested or charged?

(4) Early reports claimed that there was a third conspirator beyond Rahim and Wright. The FBI affidavit filed against Wright repeatedly references a “third person” who plotted with Rahim and Wright and met with them.

Yet there has been no further mention of this “third person,” and apparently no arrest of him. Why not? Is that third person an FBI informant? Is this yet another case where the director and prime mover of a scary “terror plot” is in fact the FBI itself, through the FBI-directed “third person”?

(5) What basis exists for the highly inflammatory claim that Rahim was “linked to” or “inspired by” ISIS? The only evidence cited was that he followed and “liked” some ISIS-related material on social media. Is that now sufficient for being publicly depicted by the U.S. media as an ISIS operative and treated as such by gun-wielding agents? Note that the Obama DOJ is currently trying to add 20 years onto a prison term of a Florida imam based on the “Islamist” books he possessed.

Speaking of social media, here is what Rahim wrote on his Facebook account, datelined November 27, 2012, in Boston:

Damn FBI calling my phone! They just want any opportunity to drag a Muslim into some DRAMA … He wanted to meet up with me and “Talk.” HA! I said about WHAT? He said “Sir, we have some allegations regarding you …” I said “REALLY?” What ALLEGATIONS? He said “Well sir, thats what I wanted to meet up with you about. I came by your house a few times, but kept missing you.” I said, “If you want to summon me, you summon that COURT ORDER if your allegations you claiming are true, otherwise, BEAT IT” and then I hung up … funny, I was just telling my brother I heard some clicking noises on my phone. Every Muslim needs to treat these government cronies the same way I did, because if you let them get close, trust me, they’ll have you making statements about things that could get you jail-time, that in fact, you were preaching AGAINST i.e. violence and terrorism. Try again, monkey-boys …

So he was not only wary of being set up by the FBI, but specifically said he was “preaching AGAINST violence and terrorism.” As AP noted, on social media Rahim “spoke out against the kind of violence Islamic State extremists are fomenting across the Middle East,” and “posted no bloody pictures and made none of the violent calls to arms many supporters of armed extremist groups espouse on social media.” Moreover: “killing people is anti-Islamic, Rahim wrote, arguing a key tenet of the faith is ‘we do not fight evil with that which causes a greater evil.’” That is the exact opposite of the social media profile of some sort of ISIS-inspired terrorist, and is the exact opposite of how Rahim was repeatedly depicted during two weeks of media sensationalism based on FBI claims.

(6) The monitored telephone calls cited by the FBI as proof of Rahim’s plot are, at best, ambiguous. They quote Rahim as telling Wright: “Yeah, I’m going to be on vacation right here in Massachusetts,” about which the FBI affidavit says: “Based upon my training, experience, and involvement in this case, I believe that ‘going on vacation,’ a phrase used repeatedly in conversations between WRIGHT and RAHIM, refers to committing violent jihad.”

Muslims actually do take vacations like everyone else, so maybe “going on vacation” means “going on vacation” rather than “I intend to commit violent jihad by beheading police officers”? Other interpretations of supposedly coded language — such as  “like thinking with your head on your chest” as a signal for “I intend to behead police officers” — are similarly questionable, at the very least worthy of some skepticism before declaring that the killing of Rahim was justified on the ground that he was a beheading-plotting ISIS terrorist.

The affidavit also cited Rahim’s statement that he was going to “go after” the “boys in blue,” as proof that he intended to murder police officers. But in his social media postings, Rahim constantly complained about being harassed by the police for no reason; at one point, after they questioned his neighbor, he wrote: “They are persistent but guess what, they got nothing on me. Keep on coming, you stupid fools and I’ll sue the crap out of you for harassment.”

Arguably, “go after” the “boys in blue” could mean I intend to behead police officers, but it could at least as plausibly mean: I intend to sue them. Again, the FBI’s featured evidence is weak and ambiguous at best, and nobody should be simply assuming that it proves Rahim was a guilty terrorist who deserved to die.

What we have here is a black Muslim man killed while walking to work, followed by dubious and evidence-free inflammatory claims from the FBI and its media that are designed to make you want to simply dismiss Rahim as an Evil ISIS Operative who deserved to die, all without asking any questions. The point here isn’t that he’s innocent; there still aren’t enough facts yet to reach a valid judgment. The point is that these kinds of incidents and official claims should always be met with questions and skepticism, especially by journalists. Here, the more “evidence” that is presented, the more numerous and compelling those questions become.

Using the weakest possible statements, the same law enforcement agencies that killed him branded him an ISIS terrorist and the media dutifully followed. They essentially worked in tandem to find him guilty of his own shooting death.