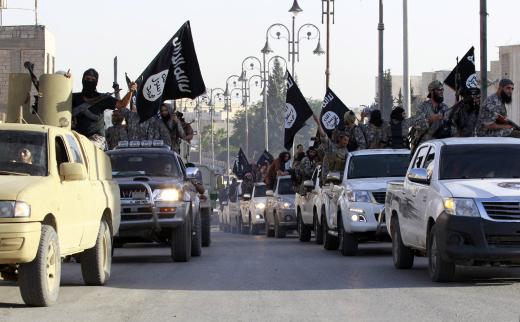 Secretary of State John Kerry told allies last week that the Islamic State (ISIS) is “no more a state than I am a helicopter.” The secretary is right, and by saying that, he placed a needed emphasis on scrutinizing the back half of the terrorist group’s declared name, when the front half is so much more often discussed. The Islamic State’s eponymous claim—namely, that it is a state—has implications from Ukraine to the South China Sea and poses a challenge to international stability that could well outlive the Islamic State itself.

To understand why this is so, we need to recall some basic principles about what makes a state in international law, why some seemingly effective state-like entities have been rejected as states, and what, besides its medieval vision of society, makes the Islamic State’s claim so radical.

The Islamic State in certain respects resembles a state. It maintains an administrative apparatus, armed forces, and a more than purely transitory hold on territory, resources, and people. It certainly claims to be a state. A claim to be a state is a necessary (and sometimes overlooked) element in being a state. A group making a claim, of course, does not in itself equate to success. Groups that did not keep control over a place and people, unsurprisingly, did not succeed. There is no Tamil State, no Chechen State, no Biafran State. The people who wished there to be held on for a while, months or even years. None organized themselves in stable, state-like fashion for longer than that. In each case, the existing state whom they had threatened eventually overwhelmed them.

A seeming paradox exists when an entity does achieve long-lasting power and excludes any practical semblance of the prior state’s control, but still fails to secure itself as a state. Northern Cyprus declared independence in 1983 as the “Turkish Republic of Northern Cyprus”—the “TRNC”—and continues to this day as a separate entity outside the effective control of the Republic of Cyprus. Apart from Turkey, no state and no international organization whatsoever considers the TRNC to be a state. Then there was Rhodesia (note to secessionism trivia buffs: Rhodesia is the only entity other than the American Colonies to declare independence unilaterally from the British Empire). Rhodesia’s declaration, short-term, met less resistance than the Colonies’: Britain did not use force to thwart the putative Rhodesian state. Rhodesia lasted from 1965 until 1979. However, as with the TRNC, nobody considered Rhodesia to be a state.

The Islamic State, like a number of other attempts to create a state, certainly has established itself as a matter of facts on the ground (even if, hopefully, those facts prove not to last). Yet like claims of statehood, neither do facts, by themselves, create a state. Law has something to say as well. An entity that another state summons into being by using force against an existing state will not be accepted as a state. This was the problem with the TRNC. Its separation from Cyprus was the result of an invasion. This was also a problem with the five-day-long Crimean “State” that supposedly seceded from Ukraine.

Nor has the international system since 1945 accepted new claimants as states whose claims are inseparable from gross violations of the rights of the people they rule. This was the problem with Rhodesia. Its white minority rulers instated a regime of apartheid, and that regime was the raison d’etre of their supposed state. The rulers of the Islamic State, though like the Rhodesians before them certainly wielding effective power, rule in staggering disregard of modern law. Their wholesale violation of basic human rights is inseparable from their idea of what a state should be. For this reason, the international system must (and does) reject their claim to constitute a state.

Another reason exists for rejecting the Islamic State’s claim to be a state, and herein lies a challenge that well may persist once the Islamic State no longer exists: Together with draconian measures against the populace, the Islamic State demands an end to other states. The Islamic State claims not just to be a state, but a state to end all states, or, if not all states everywhere, then all states in the Muslim world. Regardless of its practical reach, the Islamic State’s goal of overturning settled boundaries and eradicating established states has repercussions everywhere. After centuries in which going to war was a lawful way to acquire new territory, states in 1945 declared with decisive finality that it is not. International law since then has had its failures. One of its successes, arguably the cornerstone of all its successes, has been largely to avoid new territorial wars. The absence of a great power war, a resounding achievement, owes in no small part to our joint resolve that territorial claims may never again be pursued by threat or force. The Islamic State violates fundamental rules of international law—including the rule that settled boundaries remain settled unless the states involved freely consent to change them.

The danger is that the Islamic State’s claim to overturn states is not isolated. Others, too, now challenge the system of stable borders upon which our security relies. China escalates its military presence in disputed islands, making the peaceful settlement of those disputes ever less likely. Russia uses force to seize territory from Ukraine, and further annexations appear to be in store. These are real states, not mere claimants. The precedent they set when they suggest that force may decide territorial rights is all the more damaging. The Islamic State’s claim, in this respect, is not isolated. International law cannot accept a state based on such a claim, because international law would not survive if it did. For the same reason, international law cannot accept the violent overthrow of states and borders by existing states either. The Islamic State’s medieval vision of domestic society sets no example that any state would follow.