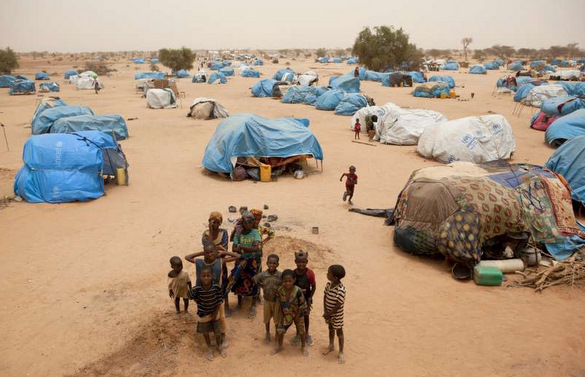 Fighting in northern Mali has forced nearly 60,000 people to flee their homes over the past month, a UN aid agency says, highlighting the lack of peace despite a partial deal being signed earlier this month.

The latest exodus brings to more than 100,000 the number of Malians displaced in the desert north, which has been in turmoil since a 2012 Tuareg-led separatist uprising was hijacked by better-armed al Qaeda-linked fighters.

French forces scattered the al-Qaeda fighters in 2013. But they have since regrouped and are attacking French and UN troops, who are also trying to broker peace between the southern government and rebels seeking autonomy for the north.

UNHCR, the UN refugee agency, said the majority of the newly displaced were from the Timbuktu region, which has seen a string of clashes involving various groups of fighters.

Civilians said they were fleeing their homes because they feared violence as well as forced recruitment by armed groups, UNHCR said.

The recent flare-up had also forced some Malians to cross into neighbouring countries, reversing the flow of refugees who, until recently, had been gradually returning home from Burkina Faso, Mauritania and Niger, UNHCR said.

“Although the numbers are still relatively low, this is an extremely worrying development since it shows the degree to which civil strife in Mali is undermining social cohesion,” it said.

The Bamako government and its allied northern armed groups signed a peace deal on May 15 but a coalition of Tuareg-led rebels, known as the CMA, has so far refused and clashes continue between the rival factions.

French and UN forces are increasingly being caught in the conflict, with all sides accusing them of impartiality.

While most of the violence has been limited to the northern desert zones, long awash with fighters and smugglers, the southern capital, Bamako, has seen a spate of attacks in recent months.

The UN said the number of people displaced by conflicts in Africa’s Sahel region has more than doubled in just over a year to a staggering 3.5 million.

At the beginning of 2014, the UN humanitarian agency had reported that around 1.6 million people were displaced across the nine Sahel countries: Burkina Faso, Cameroon, Chad, Gambia, Mali, Mauritania, Niger, Nigeria and Senegal.

The region is home to some of the world’s poorest countries that have long been plagued by food insecurity, malnutrition and epidemics.