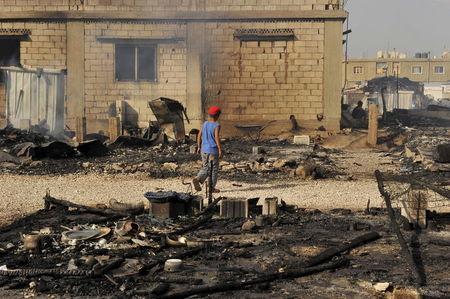 A boy walks near the remains of tents that were burnt in a refugee camp for Syrian refugees in Lebanon's Bekaa Valley June 1, 2015. REUTERS/Hassan Abdallah

At least six people have been killed after dozens of tents at a Syrian refugee camp in Lebanon’s Bekaa Valley caught fire, security sources said.

At least 160 of the roughly 300 tents, which housed around 600 people, were burned on Monday and several people were missing, the sources said.

The cause of the fire was not immediately known, according to the sources, the Reuters news agency reported,

“The bodies were totally burned and cannot be recognised. Some are children,” one  of the officials said.

The four-year conflict in Syria has forces millions of Syrian to flee their homes. Around 1.7 million Syrians are refugees in neighboring countries like Lebanon, Jordan and Turkey.

In Lebanon, where a quarter of the population are now refugees, the authorities have barred the UN from opening official camps. The displaced are scattered across some 1,700 communities.

Syrian refugees in Lebanon live in dire conditions. Many live in makeshift settlements, sheds, garages and unfinished buildings. Some of the tents are made from old billboard posters.