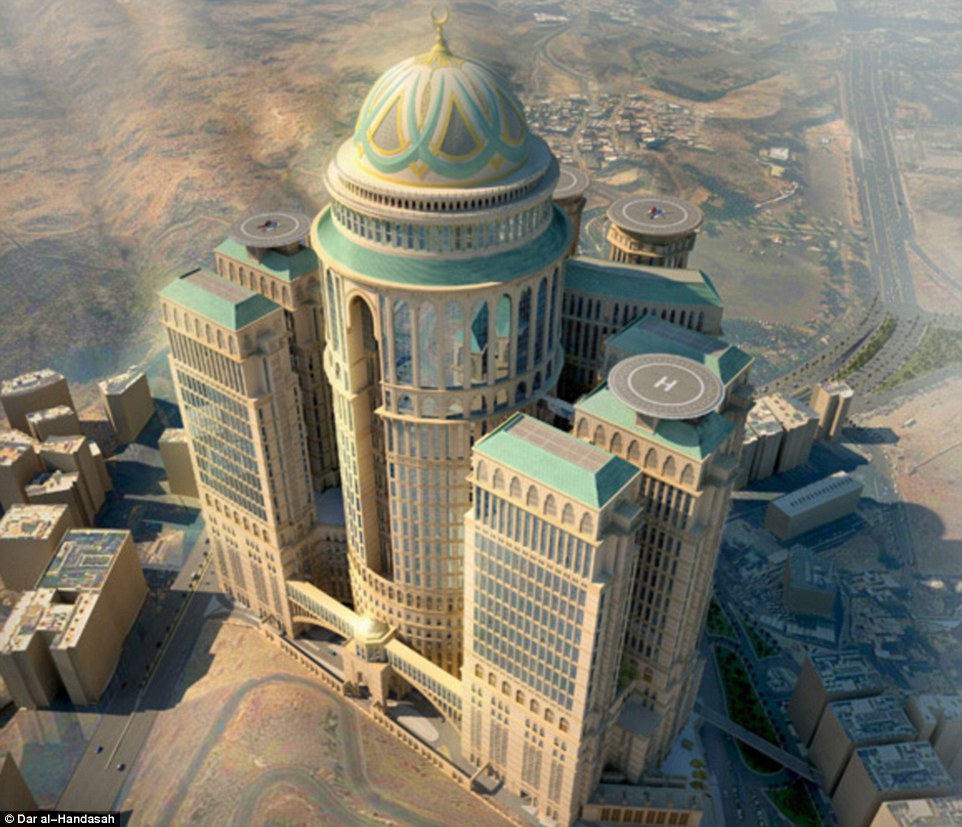 Plans have been unveiled to build the world’s largest hotel, which could be open as early as 2017.

The Abraj Kudai, will be located in the holy city of Mecca, Saudi Arabia, a city visited each year more than 15million Muslims.

With twelve 44-story towers containing 10,000 rooms, the hotel, which is being created by multi-national design group Dar Al Handasah will have a total area of 4.6 million square feet.

Work has already begun on the £2.25billion project, which will feature 70 restaurants, multiple helipads, whole floors devoted to royalty and one of the largest domes in the world, according to reports by design website designMENA.

Ten of the towers will cater for four-star guests, while the remaining two will offer luxurious five-star amenities.

On its website, Dar Al Handasah states: ‘With a total site area of approximately 60,000 m² and total built-up area of around 1.4 million m², the project is a residential and commercial complex that consists of a large podium topped by 12 towers accommodating several elements such as a podium housing a bus station, a shopping mall, restaurants and food courts, a convention center and car parks.

The five star towers offer all related services for the visitors of the Holy Kaaba.

The interiors – expected to match the opulence expected of the local area will be designed by London-based Areen Hospitality design practice.

Much of Mecca’s historic architecture has now been demolished, including the house of Khadijah, the wife of Muhammad, and the house of Abu Bakr, which is now the site of the Hilton hotel.

While many buildings were destroyed to make way for accommodation and facilities for the influx of prilgrims each year, some of the destruction is due to Saudi Wahhabism, which fears that placing significance on religious places may lead to shirk or idolatry.