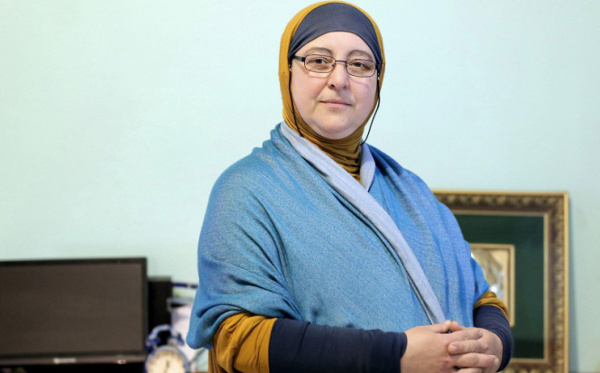 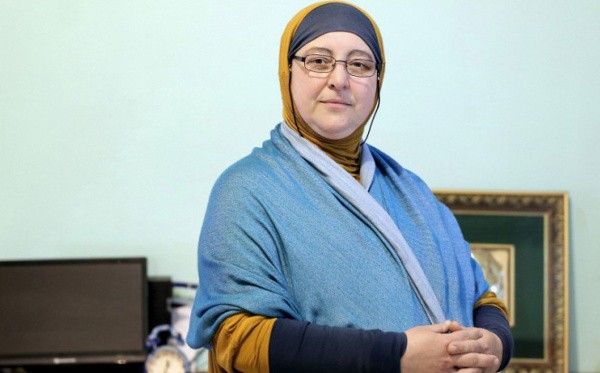 A trained mathematician, she’s one of the only Muslim women in France to work as a prison chaplain. The presents she brings are for the convicts she visits, though she adds: “I mostly share my life experience.”

This morning, Talibi is wearing ochre and blue veils that highlight her young-looking face and wrap her generous silhouette. She spends half her time behind bars. Three or four times each week, after showing her badge, she passes the multiple doors leading to the women’s quarters in five prisons around the northern cities of Lille and Valenciennes. In one only, a special building for suicidal prisoners, does she ever meet men.

Of the 30 female convicts she meets — either in small groups at the library or one-on-one in the cells — she says they’re “often the same age as my children.” Talibi has seven children, the eldest is 31, the youngest, a girl, is 11 and suffers from Down syndrome. She dedicates practically all her free time to her.

Behind the prison walls, Talibi listens to the women, helping them regain their self-esteem despite their families’ shame, and gives them gifts — even if it’s a simple pair of socks. And she prays with those who ask for it.

Since has noticed that more and more women, and younger ones too, want to convert to Islam. But Talibi is very careful that their wish is purely personal and a free choice rather than just wanting to please men waiting for them outside. The process is very simple: It consists of declaring that there is just one God and that Muhammad is his prophet.

Born in Tangier, Morocco, Talibi grew up in a very religious family. “My grandfather was an imam. My mother learned the Koran by heart when she was 9. We lived in the third story of our building, three girls and three boys. There was a Jewish family on the ground floor and a church across the street,” she says.

“These people worship God, and that’s good,” her mother would tell her.

In 1982, at the age of 21, she joined her brother in Lille to continue her studies. She got married a year later to a math teacher, Imam Moulay el-Hassan el-Alaoui Talibi, who’s now retired after serving as chief prison chaplain of the French Council of the Muslim Faith.

“Fifteen years ago, Irène, a Catholic chaplain, came asking for my husband’s help. Some convicts wanted to pray for their parents, but in their own way, not hers. I thought of my mom, who had passed away a few years before that, and I decided I would help them,” she says.

In France, 13% of prison chaplains are Muslim. There are 183 of them. But, according to a 2014 parliamentary report, Muslim convicts account for 60% of France’s prison population. In January, following the Charlie Hebdo attack, Prime Minister Manuel Valls pledged to recruit 60 more Muslim chaplains to counter the radical imams. “It’s not enough,” says Talibi.

She also says the 287 euros a month barely covers her costs, even with an extra bonus for her as a coordinator. “It doesn’t matter, I pay out of my own pocket,” she says. “We live by God’s mercy.”

Life on the inside

During her 13 years as a prison chaplain, Talibi has seen the destructive effects of life in jail. “We’re punishing people for not respecting the law, but once they’re behind these walls, we don’t respect the law either as far as they’re concerned,” she says. “Nothing here encourages responsibility, nor helps them become more mature. Prison is a place where you stop, where you damage yourself.”

She recounts the solitude of one young woman whose board for pictures and letters remained empty, week after week. “That,” she says, “is when you know you have to come back.”

“Praise God, Maria,” she told the inmate. “Feeling good isn’t linked to our material possessions, nor to the walls that keep us closed in. It depends on how we view the things we have.”

Even though she never asks the women what brought them to jail, she ends up hearing their stories. One inmate named Chams (which means “sun” in Arabic) had been a nurse’s aid. One day, she came home and found her five-year-old daughter unconscious. Tests in hospital showed the girl had a brain hemorrhage and had been beaten. The man Chams was living with had hit her, and a few hours later the child died. The mother rushed back home and stabbed the man. “But when she saw the blood she felt remorseful. She called an ambulance and he survived,” Talibi recalled. “He was sentenced to 30 years in prison. She got 16. What would we have done in her place?”

Among the men, there’s one young skinhead, his hands covered in scars, who attacked a Muslim man and left him for dead. His victim is in a wheelchair now. “I can’t stop trying to kill myself,” he tells the chaplain. “You want to kill yourself because deep down you’re a good person. You want to eliminate the person who did this. But every day, God turns a new blank page for us. Help others to rise!”

Other times though, despair takes over. Talibi remembers one woman who kept a plastic bag over her face until she died of suffocation. It was Mothers’ Day and her family had refused to bring her three-year-old to visit her.