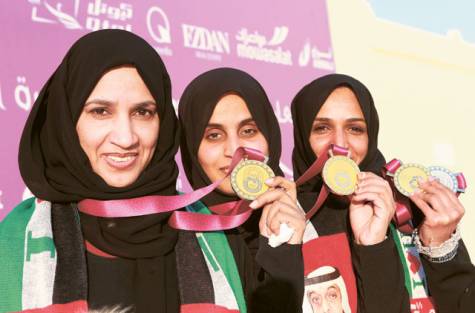 Women’s sport in the UAE has been witnessing a series of firsts. For the first time in history, young Emirati females are taking part in sports like swimming, gymnastics and figure skating – disciplines that were previously considered taboo for women in this part of the world.

It took only four years for women to earn the right to compete at the Olympics – they were allowed to participate starting the second edition of the Games in 1900 – but it wasn’t until London 2012 that every single nation taking part included female athletes in their delegations.

The last three countries to make that essential move to send females to the Olympics were Qatar, Brunei and Saudi Arabia.

The International Olympic Committee twisted their arms ahead of London and said no nation would be allowed to participate in the Games without including female athletes. Qatar, Brunei and Saudi Arabia were forced to oblige.

The UAE had taken that step just four years earlier when Sheikha Maitha bint Mohammed Al Maktoum and Sheikha Latifa bint Ahmed Al Maktoum became the first Emirati women to compete at an Olympic Games, lining up for the taekwondo and showjumping competitions respectively in Beijing 2008 – a full 28 years after the IOC had first recognised the UAE National Olympic Committee.

Ladies in the UAE first entered the international sports scene in the late ’90s in sports like shooting and equestrian – both considered traditional disciplines commonly practiced in the country.

Shamma Al Muhairi was the first woman to represent the UAE in a formal capacity at a major international meet when she competed in the 1998 Asian Games in Bangkok in the air pistol shooting event. Four years later at the Asian Games in Busan, Al Muhairi led a full Emirati shooting team while Shaikha Maitha made waves by competing in karate.

In 2005 in Doha, women were allowed to participate in the West Asian Games for the first time (it was the third edition) and it was Al Muhairi who became the first-ever female gold medallist at the Games, when she triumphed in the 25m air pistol action.

Small steps were being made, significant international appearances were getting noticed but on a nation-wide level, federations needed to be formed, ladies national teams had to be created and it remained unthinkable for women to compete in certain sports. But over the past decade, and particularly since 2009, some advances have been made.

In mid-2009, the UAE Football Association formed a Women’s Football Committee dedicated to creating a national team that could officially represent the country internationally.

The WFC’s Amal Bu Shallakh, a board member of the UAEFA, says the committee started with just 20 Emirati female footballers six years ago.Today, she claims there are 2,000 players.

The UAE national side got their first FIFA ranking in 2010, hitting the No128 spot. This year alone, they have risen 60 spots to their current position of 73 – the 14thhighest ranked country in Asia – thanks to a win over Lebanon in the Aphrodite Cup in Cyprus last February.

Bu Shallakh admits the challenges have been aplenty in the journey of UAE women’s football, citing cultural and religious barriers as the main obstacle.

She says FIFA’s decision to lift a ban on hijab has been vital and has allowed more Emirati women to take up the sport. She also says that the general view towards a woman playing sport has changed within society.

“Of course there have been challenges and obstacles but there have also been solutions. The hijab issue, the traditions that can act as barriers… all these challenges have been met,” Bu Shallakh told Sport360º.

“Players now are allowed to play while wearing the hijab and as you can see, all our players are able to play football while covered up.

“Now we see the parents themselves coming to us, bringing their daughters to join our football programme. That shows that the sporting culture is catching on in every Emirati house – something we haven’t had in the past. Now Emirati houses are getting more progressive, better educated, more cultured. We now value sport as a tool for bettering one’s life.”

Clubs like Wahda, Al Nasr and Al Ahli have formed women’s sides and are taking part in the ongoing eight-team IPIC Women’s League, which consists of five professional and three social clubs. According to Bu Shallakh, the sponsorship deal signed with IPIC is the largest in women’s sport in the region.

“My mother is the one who has encouraged me to play football. She knew someone at Wahda club and that’s how I became part of the team,” said Hamda Khaled, a 17-year-old goalkeeper for both Wahda and the UAE national team.

“Some people, when I tell them I play football they say ‘what? Girls, playing football?’ But we get support from our families and close friends. The sport wasn’t popular but now we can find opportunities to play so it’s good,” said Saleh.

The progress hasn’t just been happening in team sports. There have been a number of individuals who are blazing a trail in their respective fields.

Last month, 15-year-old Alia Al Shamsi became the first female swimmer to fly the UAE flag in a competition when she swam the 50m and 100m breaststroke and 50m backstroke at the Arab Championships in Dubai.

The UAE Cycling Federation formed a women’s national team in 2012 and their four-medal haul at the Arab Track Championships in Sharjah in March was an unprecedented feat for them.

Their eldest cyclist, the 25-year-old Ohoud Saeed, recalls a time when she would get harassed while cycling on the roads of the UAE but says things are different now.

“I used to cycle in Fujairah, where I would get harassed by motor bikers; they’d get close and surround me when they realised I was a girl, but I overcame such things and look now, we have a team,” said the hijabwearing Saeed.

Emirati Zahra Lari, 20, is the first-ever female figure-skater to enter an international competition wearing a hijab and has been a sensational breakthrough on the ice.

Dress code has been one of the biggest problems when it comes to getting UAE women involved in sport but the more flexible sports officials are in allowing competitors to be covered up, the more prevalent Arab and Muslim women will become in international sport.

Another thing that can make a difference is having access to properly-trained female coaches. Two young Emirati girls, sisters Amina, 13, and Shaikha Al Tayer 10 (left), have emerged in rhythmic gymnastics and their Turkish coach, Angel Ilgaz, says the reason the discipline is gaining traction in the UAE more than other disciplines is because only women compete in rhythmic (very few countries have men competing), so it is a completely male-free environment.

Another key factor is creating a strong relationship between coaches and the parents. Most active coaches say that getting the parents to trust them to deal with their daughters and accompany them in travel has been the real game-changer for them.