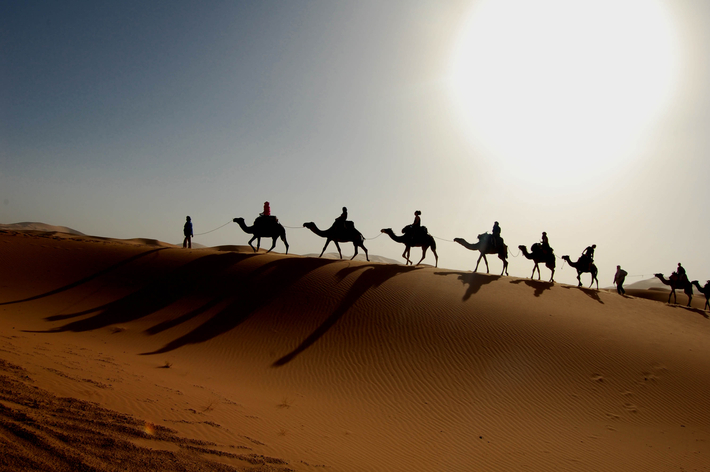 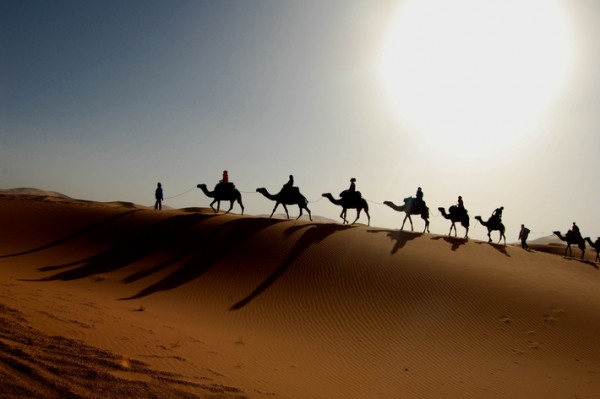 Muhajir refers to “a person who leaves his / her place of residence or country to live elsewhere.” The plural form of Muhajir, namely Muhajirun, as a term, refers to those early Muslims who believed in Prophet Muhammad (pbuh) after he started the call to Islam. Because of their faith, the Muhajirun were subject to the oppression, persecution and torture of Meccan idolaters, and they left Mecca for Medina as the dosage of persecutions and tortures became unbearable. It had become practically impossible to call people to Islam.

At the 5th year of prophethood, as the Meccans increased their oppression, persecution and torture, the Prophet advised Muslims to move to Abyssinia (Ethiopia), where they would gain the chance to practice their religion more efficiently and with more ease. Following his advice, a small band of Muslims, including Uthman and his wife -Ruqiyyah, the daughter of the Prophet- migrated to Abyssinia. As their migration proved to be unproblematic, a larger group of Muslims followed them to Abyssinia in the subsequent year.

However, the act of migrating to Abyssinia was not sufficient to solve the problem at hand; firstly, the Meccan idolaters tried to bring the refugees back by sending emissaries to the king of Abyssinia, al-Najashi, who was protecting the Muslims. As this attempt did not yield success, they increased the persecution of Muslims residing in Mecca.

Meanwhile, the Prophet, who was continuing to call different groups to Islam, came into contact with six men traveling from Medina on the 11th year of his prophethood. These men converted to Islam, and began to propagate Islam to the people in Medina. Five of them came back to the Prophet the next year bringing with them seven others and the twelve men gave the oath of allegiance to the Prophet. The number of people coming from Medina increased to 75 in the season of pilgrimage of the 13th year, and they repeated the first pledge in al-Aqaba, and invited the Prophet to Medina.

The Muslims began to migrate to Medina in April 622. In order not to draw the attention of idolaters, they completed their emigration in small bands. Finally, accompanied by Abu Bakr, the Prophet migrated; and Ali, who slept in the Prophet’s bed on the night when the Prophet departed for Medina, joined them in Quba’Islam

Upon these sincere invitations and pledges, Prophet Muhammad was commanded to migrate to Medina, and he gave permission to his companions for emigration. Following this, the Muslims began to migrate to Medina in April 622. In order not to draw the attention of idolaters, they completed their emigration in small bands. Finally, accompanied by Abu Bakr, the Prophet migrated; and Ali, who slept in the Prophet’s bed on the night when the Prophet departed for Medina, joined them in Quba’.

Upon the emigration of the Prophet to Medina, the Hijrah was completed and a new period for the dissemination of the message of Islam (tebligh) began. It was fard (obligatory) for those who were able and who had converted to Islam during the period between the first command of Hijrah and the conquest of Mecca to migrate to Medina. The obligation was removed following the conquest of Mecca. During the course of the Hijrah, Muslims, especially the Prophet and Abu Bakr, were under pressure and material stress: some of the Muhajirun could not take their spouses and children with them due to the struggle of faith within their families; some of them could not collect their debts from the people of Quraish and also their valuable portable goods were taken from them; some of them were imprisoned by idolaters; and others were tied up and tortured at the beginning of their journey for the Hijrah.

The migrants’ adaptation to Medina was not easy after the Hijrah, and some of the Muhajirun felt regret for what they had left behind which included the places where they were born and grew up, their possessions, and their relatives.

Just after the Hijra, the Prophet established a bond of brotherhood which joined everyone of the Muhajirun as brothers to one of the Ansar (residents of Medina). Thus the Ansar provided spiritual and material support to their brothers with their gentle manners, good character traits (such as easy satisfaction) and generous hospitality

Just after the Hijra, the Prophet established a bond of brotherhood which joined everyone of the Muhajirun as brothers to one of the Ansar (residents of Medina). Thus the Ansar provided spiritual and material support to their brothers with their gentle manners, good character traits (such as easy satisfaction) and generous hospitality. A reference to their attitude and behavior is made in the Quran : “Those who believed, and adopted exile, and fought for the Faith, with their property and their persons, in the cause of Allah, as well as those who gave (them) asylum and aid,- these are (all) friends and protectors, one of another.” (Al-Anfal 8/72). On the other hand, the climate and the water of the new place made the Muhajirun sick for a while, even the Prophet prayed for Allah to make the conditions of Medina more suitable for their health.

These sincere Muslims who were the first greeters of revelation, who converted to Islam despite the prevailing dangers, who were tortured because of their faith, and who left their homes, families and friends for Allah and His Messenger, and migrated to Medina, gained the pleasing of Allah and they received His compliments. There are several verses in the Quran referring to their characteristics and status in the sight of Allah.

Allah said in the 20th verse of Surat al-Tawbah, “Those who believe, and suffer exile and strive with might and main, in Allah’s cause, with their goods and their persons, have the highest rank in the sight of Allah. They are the people who will achieve (salvation).”

It is also mentioned that the Muhajirun, who migrated for the sake of Allah, would be forgiven even if they had committed sins;“Never will I suffer to be lost the work of any of you, be he male or female: Ye are members, one of another: Those who have left their homes, or been driven out therefrom, or suffered harm in My Cause, or fought or been slain,- verily, I will blot out from them their iniquities, and admit them into Gardens with rivers flowing beneath;- A reward from the presence of Allah, and from His presence is the best of rewards.”  (Al-i Imran, 3, 195)

In addition to the Quranic verses, there are also several hadiths which praise the Muhajirun, In these hadiths, it is generally mentioned that these people migrated to please Allah and His Messenger, and therefore will be the first to enter Paradise, that they are the best generation amongst the ummah (Islamic community), and that their faces will shine like the sun on the Day of Judgment.

The Muhajirun were closely associated with the Prophet in his struggle to expand faith and they also had a very special position in the dissemination of the message of Islam during the subsequent years of his prophethood and his demise. The prominent figures of the Muhajirun can be listed as follows: the caliphs of the Prophet after his demise, namely Abu Bakr as-Siddiq, Umar ibn al-Khattab, Uthman ibn Affan, and Ali, and Zaid ibn Harisa, Abdurrahman ibn Awf, Sa‘d ibn Abi Waqqas, Talha ibn Ubaydillah, Zubayr ibn al-Awwaam, Abu Ubayda ibn al-Jarrah, al-Arqam ibn Abu’l-Arqam, Abdullah ibn Mas’ud, Mus‘ab ibn Umayr, Bilal al-Habashi and Abu Dharr al-Ghifari.