Itaewon: where Korea and Islam meet 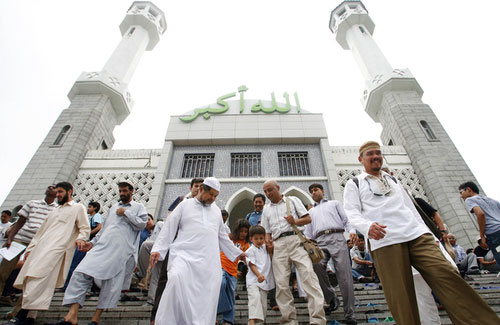 On a drizzly afternoon in Itaewon, Seoul, people busily walk up and down the hilly street leading to Korea‘s largest Islamic mosque herunterladen.

The 200-meter street looks like any other in the city. But these days, “The Islamic street,” as it is better known as, is frequented by Muslims and is home to shops with Arabic signs and restaurants selling halal cuisine maps herunterladen.

”Nowadays, there are more people coming here to wander around and visit the mosque,“ said Talat Masood, a 68-year-old Pakistani worker at a supermarket near the Seoul Central Mosque windows 10 installationsdateien herunterladen.

He has witnessed a rapid change in the neighborhood since he came to Korea 14 years ago as a factory worker, adding there were not any shops or restaurants back then herunterladen.

The creation of the street around the Seoul mosque dates back to 1993 when the government introduced an industrial trainee system, which paved the way for Muslims, mostly from Asia, to enter Korea for work fonts for free.

Since then, restaurants, shops and travel agencies have been established to serve the growing Muslim population.

The street’s busiest day of the week is Friday when more than 1,000 Muslims visit the Seoul mosque to attend their weekly prayer, or “Jumu’ah.”

But most of the time, the street is filled with Muslim tourists rather than worshippers images from iphone on pc.

The number of Muslim tourists has been steadily increasing by an average of 20 percent every year. Last year, about 75 thousand Muslims visited Korea, according to the Korea Tourism Organization schnittmuster baby shirt kostenlos downloaden.

“My main customers are Muslim tourists who travel to Korea to explore the country or get medical treatment,” said Kamran Mahboob, 37, who owns the restaurant Little India Seoul google assistant.

Mahboob opened his halal restaurant in 2013 after being forced to close his jewelry trading business amid a surge of cheap Chinese accessories in the market vektorgrafik herunterladen.

Noor Juwaini, 32, a Muslim tourist who wears a hijab, visits the street to find restaurants that serve Korean food made according to Islamic law, or halal audible as mp3.

“Itaewon is almost the only place to taste Korean foods made of halal meat,” said Juwaini, who ate Korean marinated beef, or bulgogi.

While tourists are the main visitors to the street, the area is also drawing attention from local Koreans.

Lee Eun-hye, 31, an office worker, and her boyfriend made their way to the Islamic street on the weekend while on a date.

”I don’t feel like I am in Seoul while walking along the street. Next time, I want to bring my friends and try Islamic food,“ said Lee.