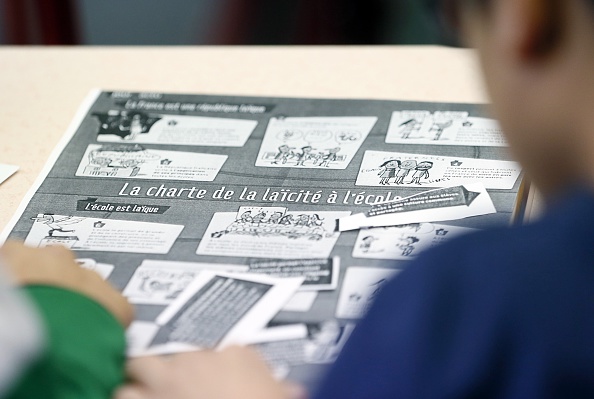 Children look at the chart on secularism in school on December 9, 2014 at the Louis Aragon school in the northern Paris suburb of Pantin on National Secularism Day.
AFP PHOTO / PATRICK KOVARIK (Photo credit should read PATRICK KOVARIK/AFP/Getty Images)

It is with greatest urgency that I beseech Muslim parents everywhere: if you think drugs and dating are the biggest threats plaguing your children at school, think again. The real danger in public schools is in the very thing we encourage our kids to master – the curriculum.

The global secular system, when truly internalized, can tear down the very faith in Allāh.  Secularism has been a staple in public education for years; so long in fact, that we may disregard the way it influences our children’s perception of themselves, their religion and the world. To explain the moral and spiritual dangers of a secular curriculum, one must first understand secularism and how it conflicts with Islām.

In simple language the word ‘secularism’ has two meanings:

i war thunderen.  Exclusion of religion from public affairs

The belief that religion and religious bodies should have no part in political or civic affairs or in running public institutions, especially schools.

The rejection of religion or its exclusion from a philosophical or moral system.

Given below are only a few issues with regards to the secular system of education.

These harms are present in varied extents in all types of schools in vogue today. This includes those schools which are referred to as integrated or Muslim schools, which are just as much cesspools of vice as the regular ones. Many a times the only thing about these schools which is Islāmic is the name. Anyone who has read this carefully will notice one thing in common in all six harms mentioned – these aren’t merely short term effects that can be easily reversed. Rather, they are long term consequences of mind boggling magnitude. In other words, to send a child to school is to willingly present him for utter destruction and devastation in this temporary worldly life, as well as the eternal life of Ākhirat. Is it really worth it?

The so-called ‘integrated’ system of education is not the real solution. Teaching the secular subjects together with the religious subjects would mean administering ‘poison’ together with anti-poison potions herunterladen. This would definitely not reduce the lethality of the poison.

We must respond to the dire need of saving the Imān our children from the dangers of the modern curriculum by investing in our Islāmic schools with our money and our time and by creating a comprehensive Islāmic curriculum, totally free from the secular approach, for classes from kindergarten to the uppermost grade, to be used in place of the secular system currently in place. Another very important point we have to bear in mind is to impart this Islamised curriculum in a totally Shariah based environment where no commands of Allāh are broken.

May Allāh Subhānahu wa Ta’ala Protect the Imān of our children and Guide us to fully grasp the reality.