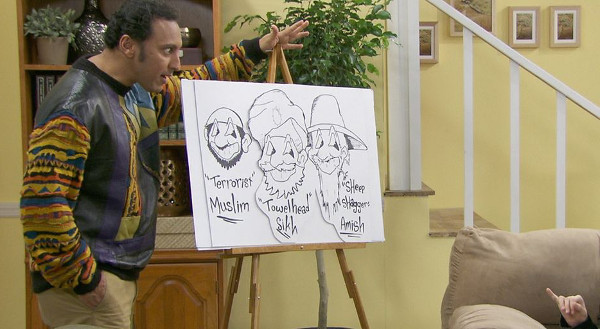 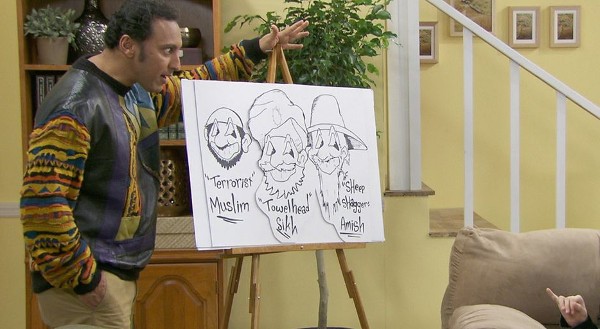 Aasif Mandvi sounds relieved, pleased – and maybe a little surprised. His web-based sitcom “Halal in the Family” – which centers on an American Muslim family – is being noticed.

“I’m excited about the amount of attention it actually has gotten,” says Mr. Mandvi, who spent a decade as the “senior Muslim correspondent” on Comedy Central’s “The Daily Show with Jon Stewart.” “What this has shown us is that there’s an appetite. People want to see an American Muslim family at the center of a sitcom. There seems to be some excitement about that.”

Mandvi’s creation, released on the Web April 9, is really a send-up of the sitcom formula that uses humor to point out serious issues related to the Muslim experience in the United States.

He hopes it will offer a modest beginning to a greater visibility for Muslim Americans in all their variety and, yes, normalcy, in American media.

“We want to satirize the bigotry and the Islamophobia and the racism, and so we created this family that’s trying, overly compensating to fit in to America,” Mandvi said in a telephone conversation earlier this week. “We’re obviously sending up a particular kind of idea that all Muslims are terrorists and bad and dangerous and to be feared.”

To that end, for example, viewers meet Muslim characters who are Caucasian and African-American. The series centers on the “Qu’osby” family, a middle-class Muslim family consisting of a father and mother of two teenagers – a boy and a girl. Despite their extreme efforts to fit in, they are constantly tripping up, such as when the father, played by Mandvi, overdoes his Halloween decorating and creates the impression that the family might be terrorists.

The series’ theme song lays out the premise:

“We’re just an ordinary family/ living in your town. We like monster trucks and football/ even though we’re brown. Welcome to our clan/ we promise there’s no plan/ to change the way you live or how you pray. ’Cause we’re just here to obey (various laws and ordinances)!”

Mandvi wrote the series with Miles Khan, a producer on “The Daily Show” who had created a short comic routine in 2011 based on biases against Muslims.

The four five-minute episodes, which are free to view, can be seen at http://halalinthefamily.tv orhttp://www.funnyordie.com/halal. Other websites may be picking up the series as well. Guest stars who make cameo appearances include “Daily Show” cast members Samantha Bee and Jordan Klepper.

To create “Halal,” Mandvi teamed with Moore + Associates, a communications consulting firm that works with groups interested in social change. It helped connect him with funding sources and organizations working on this issue, which became an advisory council to the show.

The groups, which include Muslim and civil rights organizations (such as the Center for New Community, ACCESS/National Network for Arab American Communities, and SAALT) suggested topics, such as bullying at school, bias in the news media, and politicians who exploit anti-Muslim prejudice for political gain. These issues are woven into the situations the Qu’osby family members face.

“There really is no Muslim family on TV, or even in a web series,” he points out. “So while it’s a parody of a sitcom, and not a pure sitcom, I think there really is a huge hole to be filled in the media landscape around American Muslims.”

These episodes, he says, could start to expose people to a different version of Muslims than they see on the news or what they hear from politicians, “which is overwhelmingly negative and focused on issues such as terrorism.”

The “Halal in the Family” website also features a “get involved” page (http://halalinthefamily.tv/get-involved/) with ideas on how people can learn more or take action.

After its first four days online the series had about 100,000 visitors, Moore says. Funding came from a wide variety of sources, including the Ford Foundation and the Doris Duke Charitable Foundation. About 30 percent also came through an online crowdfunding campaign on Indiegogo.

The two inspirations for “Halal” were the classic sitcoms “All in the Family” and “The Cosby Show,” Mandvi says. For white Americans in the 1980s, “The Cosby Show was the first time they’d invited a black family into their home.”

He’d be pleased if “Halal in the Family” could come into American homes in the form of new 20- or 25-minute episodes on network or cable TV. But he’s keeping all options open, including staying on the Web. “We just wanted to create something and put it out there,” says Mandvi, who was born in Mumbai, India, and whose Muslim family emigrated to the United States when he was 16. “We didn’t want to wait for TV executives to green light something, you know?”

As “The Daily Show” has proved, comedy offers a fresh way to examine politics and culture. Politicians are often trapped into taking extreme or simplistic positions. “Humor is a way into these conversations,” Mandvi says. “You can’t have a nuanced conversation [in the political sphere].

“I don’t have that burden. I’m a comedian, an actor, so we can try to …  present things in a more complex way, hopefully.”

But the first consideration, he says, is that it has to be funny. “We weren’t going to do anything unless it was funny, and it was entertaining. And then the challenge was ‘How do I talk about issues and fold that into the funny?’ ”