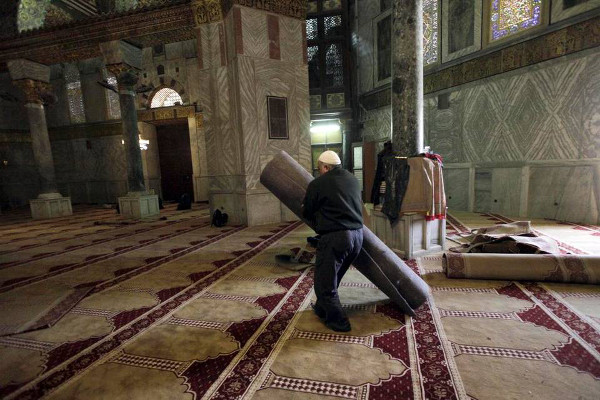 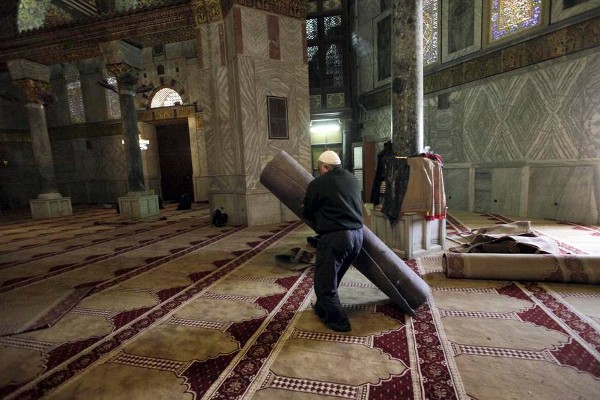 It began as a routine remodeling project: Muslim authorities replacing an old carpet worn thin by masses of worshippers at the Dome of the Rock, the iconic, gold-topped shrine that overlooks the Old City of Jerusalem.

But there is no such thing as routine remodeling when it comes to the most contested piece of real estate in Jerusalem, where the presence of a mere screwdriver can threaten to ignite religious tensions.

The carpet has sparked a verbal holy war over the hilltop compound, which is revered by Jews and Muslims whose competing claims often spill over into violence.

Israeli archaeological authorities say the repairs were carried out behind their backs, and an Israeli government minister urged an immediate halt to the work, claiming it might cause irreparable damage. Frustrated Israeli researchers say previously undocumented ancient floor designs were discovered when the old carpets were peeled off, but they didn’t get a chance to document the designs before workmen covered them up with the new carpet.

And some researchers claim the Bible’s deepest secrets may lie beneath some of the newly exposed floor designs.

“Something is there. I don’t know what. But something is hidden there,” said Israeli archaeologist Zachi Dvira, who studies the site.

Officials with the Waqf, the Muslim authority that administers the Al Aqsa Mosque compound, which includes the Dome of the Rock, reject the Israeli accusations.

Sheikh Azzam Tamimi, the head of the Waqf, said the work is long overdue and has defiantly proclaimed that he was forbidding any Israeli involvement.

“Our work in Al Aqsa is transparent,” he told The Associated Press. “We are only putting down carpet and felt. Nothing more, nothing less.”

The work quietly began more than a month ago, and Israel facilitated the renovation project, said Jamal Al Quda, a member of a group of Jordanian carpet layers who received Israeli visas for the job.

A packing list dated March 11 from an Egyptian carpet company to the Jordanian Embassy in Tel Aviv lists 80 bales of carpeting for the Marwani prayer area located at the compound, and the prayer area encircling the rock slab inside the dome.

Jordan’s King Abdullah II financed the project, according to Waqf. Israel captured Jerusalem’s Old City from Jordan in the 1967 Mideast war, but under a longstanding agreement, Jordan remains the custodian of the area’s Muslim holy sites.

On a recent afternoon in a small cave underneath the shrine’s rock, Al Quda dribbled Israeli all-purpose glue from a large tin onto an intricate stone tile decoration on the cave’s marble floor. He said it was necessary to affix the base layer of thin dark felt before rolling out the carpet above it.

Some Israeli archaeologists are alarmed about the glue used but Al Quda said the glue wouldn’t damage the floor.

“It comes off my hand,” he said, rubbing his fingers.

The cryptic geometric designs have sparked the imagination of some researchers about what secrets may lay beneath.

Ancient Jewish traditions say the gold-cased Ark of the Covenant, which contained the Ten Commandments, may have been hidden away in a chamber when the First Jewish Temple was destroyed some 2,500 years ago. It’s an Indiana Jones-type mystery that touches upon a holy grail for biblical enthusiasts.