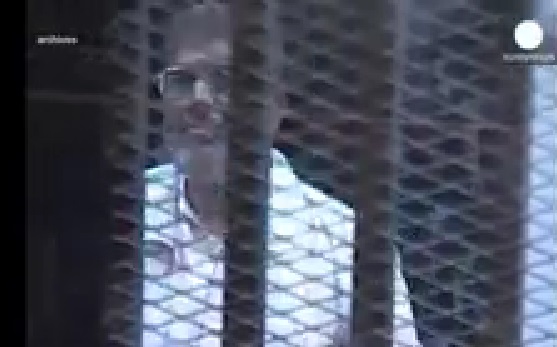 A Cairo court has sentenced former Egyptian President Mohamed Morsi and 12 other defendants to 20 years in prison.

Morsi was convicted on Tuesday of ordering the arrest and torture of protesters in clashes outside the presidential palace in December 2012. The court acquitted the former president of murder charges that could have seen him face the death penalty.

Morsi also faces serious charges in three other cases, including an accusation that he passed intelligence to Qatar.

Mohammed Soudan, a senior member of the Muslim Brotherhood, and an official within its affiliated Freedom and Justice Party, told Al Jazeera that the trial was a “political farce”.

“The verdict is 100 percent a political verdict. Morsi, his advisers and supporters who are accused in this case were victims … police and army officers watched as the opposition attacked the presidential palace,” Soudan said.

“They killed 11 people and nine of them were supporters of Morsi. .. the verdict is a test for the protesters in the street, and also a test for the international community.”

MWC News’ Toby Cadman, an international human rights lawyer involved in a number of legal cases in Egypt said that the trial underscored the politicisation of Egypt’s judiciary.

“This judgement is a political move by the Sisi regime and a show trial against the country’s first democratically elected leader,” Cadman said.

Amnesty International also condemned the trial as a “sham”, and called for the release of Morsi and protesters.

“This verdict shatters any remaining illusion of independence and impartiality in Egypt’s criminal justice system,” Amnesty’s Hassiba Hadj Sahraoui said in a statement released after the verdict.

Abdullah al-Arian, an assistant professor of history at Georgetown University’s School of Foreign Service in Qatar, said that the timing of the verdict was significant as Morsi had spent the maximum amount of time permitted by the constitution in prison and had the courts not passed judgement they would have had to release him.

Egyptian journalist, Yehia Ghanem, said the Egyptian government was sending a message that it would not tolerate any opposition.

“The whole thing was calculated politically from the start. It sends a message to Egyptians and the rest of the world that there’s no future for any civil rule,” Ghanem said.

Morsi was deposed by his then military chief and Minister of Defence Abdel Fattah el-Sisi after mass protests against his rule in the summer of 2013.

Following the coup, the former president’s supporters launched a series of protests and sit-ins across the country culminating in a crackdown by security forces that left hundreds dead.

In the deadliest incident, at least 817 protesters were killed in Cairo’s Rabaa al-Adawiya Square when security forces opened fire on a sit-in. Human Rights Watch (HRW) said the killings likely amounted to “crimes against humanity”.

Thousands have also been imprisoned, with many supporters of Morsi facing mass trials facing charges of involvement in violence.

At least 1,212 people have been sentenced to death since the start of 2014, including the head of the Muslim Brotherhood, Mohamed Badie.