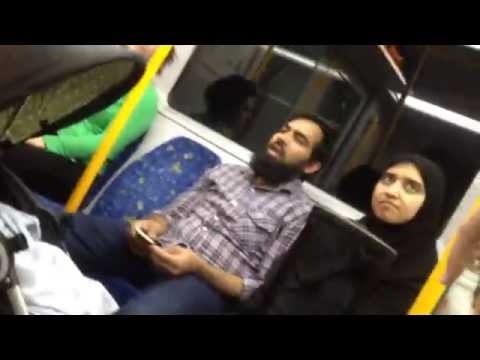 An Australian woman has been described as a “hero” for challenging a train passenger who was allegedly being abusive towards a Muslim woman sat in the same carriage.

Stacey Eden claimed an older woman was accusing the unidentified Muslim woman and the man sat next to her of being an Isis supporter because she was wearing a hijab.

Ms Eden, from Sydney, said the alleged tirade began “a good ten minutes” before she started filming the woman, later uploading the video on to her Facebook page.

Footage from the alleged incident on Wednesday began as the unnamed passenger asked the woman, who was also sat with a pram on the opposite side of the train, “why do you wear it [a hijab] for a man that marries a six year-old girl?”

Ms Eden responded: “She wears it for herself, OK? She wears it because she wants to be modest with her body, not because of people like you who are going to sit there and disrespect her.”

The woman continued despite her interjection, saying: “Your kids behead people in Syria. […] Read the newspapers, 148 people, Christians murdered in Kenya. They’re killing each other in Syria.”

Ms Eden interrupted again at this point, telling her angrily: “Don’t sit there disrespecting someone that has nothing to do with it. Have some respect. If you’ve got nothing nice to say, don’t say anything.”

The footage immediately attracted hundreds of likes, shares and comments praising her for stepping in and defending the Muslim woman against harassment.

Mariam Veiszadeh, of the Islamophobia Register Australia, told the Sydney Morning Herald she was heartened by Ms Eden’s stand. “We hope that her actions inspire others to stand up against racial or religious vilification,” she said.

“We’re not in the midst of an imaginary backlash, Islamophobia is very much real and you can see from the video it has devastating consequences for Muslim women.”

Ms Eden said she was “overwhelmed” by the positive response to the video. “I didn’t realise how something so small would end up becoming so important,” she wrote on her Facebook page.

“I genuinely have tears in my eyes at the messages people have sent me.”