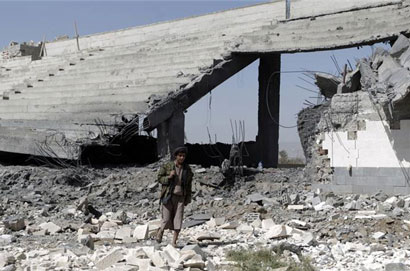 At least 16,000 foreign nationals are stranded in Yemen, the International Organisation for Migration (IOM) has said, adding that it has evacuated 143 people, as UN Secretary-General Ban Ki-moon pleaded for the resumption of peace talks in the war-torn country.

The IOM said on Sunday it had flown a first planeload of foreign nationals out of Yemen, where Shia rebel positions are being bombed by a Saudi-led coalition.

It added it aimed to continue evacuating foreigners stranded in the Arabian Peninsula nation.

“The operation was a success and paves the way for continuing the evacuations of more than 16,000 third country nationals who are stranded in Yemen,” IOM said in a statement.

Joel Millman, the IOM spokesperson, told the AFP news agency that 143 passengers had been on Sunday’s flight from Sanaa, the Yemeni capital, to Khartoum, Sudan.

The organisation said 38 countries had asked it to help evacuate their nationals stranded amid the spiralling conflict in Yemen.

“The [humanitarian] situation is complex [and there] has been air strikes all day long,” an Oxfam worker identified only as Nuha told Al Jazeera from Sanaa on Sunday.

She said the fuel crisis was also worsening.

Speaking on the sidelines of a UN crime conference in Qatar’s capital Doha, Ban said the fighting in Yemen should not be allowed to grow into a protracted regional conflict.

“There should be a cessation of military moves as soon as possible,” Ban, flanked by the Qatari prime minister, Sheikh Abdullah bin Nasser bin Khalifa al-Thani, said.

He added: “We urgently need a deescalation and return to peaceful negotiation. I firmly believe that… negotiations remain the best chance to prevent a long, drawn out conflict.”

Nine Arab countries, five of them members of the six-nation Gulf Co-operation Council (GCC) to which Qatar belongs, are part of the Saudi-led coalition, which is also backed by the United States.

The coalition launched air strikes on March 26, targeting the rebels known as the Houthis, who swept into the capital in September.Qatar has some 10 jets carrying out strikes as part of the operation, according to the AFP news agency.

The Houthis – backed by security forces loyal to former president Ali Abdullah Saleh and are battling army units supporting President Abd-Rabbu Mansour Hadi – have been trying to expand their control across Yemen. In February, they put Hadi under house arrest, demanding that he carry out political reforms.

Hadi, who fled the presidential palace to his power base in the southern city of Aden, has since sought sanctuary in Saudi Arabia, whose foreign minister said on Sunday that the air strikes sought to defend “legitimate authority”.

Ban said more than 600 people had been killed and 2,000 injured so far in the fighting.

“I am also deeply concerned about the military escalation where civilian casualties are mounting and public infrastructure is being destroyed,” he said.

An official close to Hadi, speaking on condition of anonymity because he was not authorised to speak to journalists, said the decision was meant to strengthen the role of the presidential institution.

The decision is at odds with the Houthis, who are demanding the formation of a presidential council.

The rebels held Bahah and Yemen’s other Cabinet ministers in a weeks-long house arrest that ended in mid-March. During their forced detentions, Bahah and the Cabinet members resigned in protest.