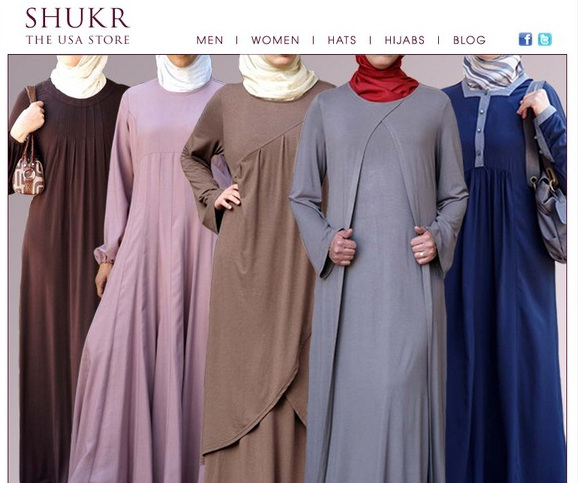 By: Y-Sing Liau and Daria Solovieva

For Anas Sillwood, a British convert to Islam who moved to Jordan in the 1990s, Shariah-compliant fashion was initially just a way to support himself while he studied Arabic and the religion.

Sillwood, who set up Shukr LLC in 2000, says he saw a gap in the market for elegant and modest clothing that would appeal to Muslims in the west. Fifteen years later, his company designs, makes and sells garments via the web and three stores.

“My goal wasn’t to become a full-time business person,” Sillwood, who plans to open five to 10 more outlets in the next five years, said in a phone interview from Amman on Tuesday. “But then it snowballed. By 2005 and 2006 our sales started to increase quite dramatically and it was obvious there was very big potential for the industry.”

Dominated for centuries by small family businesses, the industry is now attracting interest from Islamic finance centers. Dubai has set up a tax-free design hub including Islamic fashion. STC Ventures, a venture capital fund backed by the Saudi Telecom Company, said in February it has invested in Modanisa.com, a Turkish Shariah clothing website. Islamic Fashion Festival, started in Kuala Lumpur in 2006, has held shows in 17 cities including London, New York and Jakarta.

The growing interest comes as Muslims around the world choose to spend their money and manage their finances in a Shariah-compliant way. The global Halal industry, encompassing food, textiles, tourism and health care, will double to $6.4 trillion by 2018 from 2012, according to the Malaysia International Islamic Financial Centre. Shariah banking assets are also forecast to double to $3.4 trillion by 2018 from 2013, Ernst & Young LLP says.

“The Muslim fashion and lifestyle business is still considered as a retail segment that is not fully exploited,” said Abas A. Jalil, the Kuala Lumpur-based chief executive officer at Amanah Capital Group Ltd., a consultancy. “We have yet to see many notable or well-known global Muslim fashion brands that are sold in various countries,” he said in an April 3 e-mail interview.

Spending on Islamic clothing and footwear will increase 82 percent to $484 billion by 2019 from 2013, according to the State of the Global Islamic Economy 2014-2015 report by Thomson Reuters Corp. and Dinar Standard, a New York-based researcher. The rising spend is underpinned by a Muslim population of 1.6 billion, that the Pew Research Center projects will grow at the fastest pace of any major religion to 2.9 billion by 2050.

The Dubai Design District is part of a plan by the emirate to become the global capital of the Islamic economy. Companies based in the hub will be granted tax breaks, according to the district’s website.

“Small- and medium-sized enterprises are on the rise and eager to grab a slice and tap into the market,” she said in an April 6 e-mail interview. “The challenge for the entrepreneurs is to find the financing opportunities which are compliant with their faith, business ethos and needs.”

Retailers are targeting a broader audience with offerings that aim to dispel the perception that Shariah-compliant clothing is sombre and primarily black. Designers are rolling out long robes and hijabs punctuated with splashes of color, embroidery and tassels for women and jackets with gold trimmings and vibrant scarves for men.

“It has to cross the boundaries of just catering to Muslims,” Raja Rezza Shah, founder of the Islamic Fashion Festival, said in a March 25 interview in Kuala Lumpur. “The only way is to make it look more fashionable rather than religious.”

Lee Khoon Hooi, a Malaysian designer who showed an Islamic collection at the festival three years ago, said the amount of inquiries he received afterward took him by surprise. Muslim clothing, including floral hooded kaftans and ankle-length silk skirts, will probably double to around 10 percent of his sales this year, he said in a March 30 interview in Kuala Lumpur.

“The Muslim fashion market is an extremely exciting and profitable market,” Romanna Bint-Abubaker, chief executive officer at fashion website Haute Arabia, said in an April 7 e-mail from London. Demand is fueled by “a generation of young, confident and tech-savvy Muslims who are comfortable and proud of their faith,” she said.