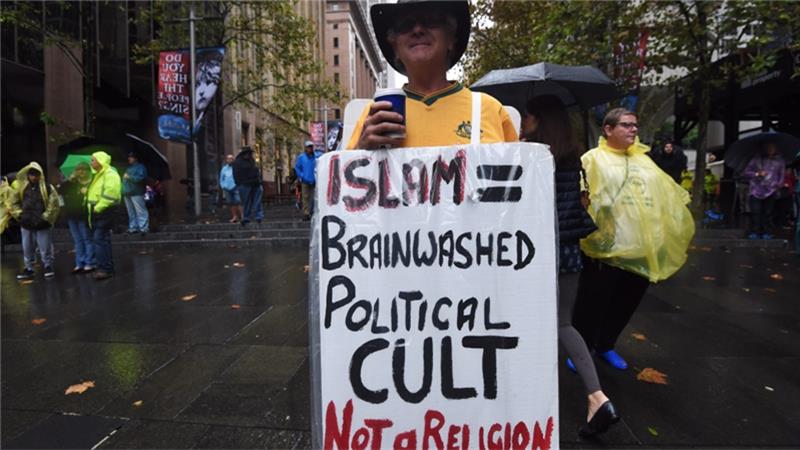 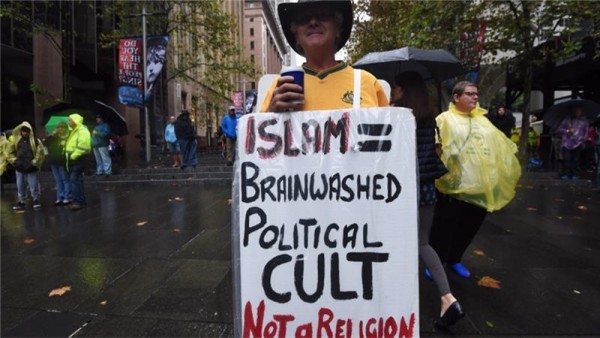 A series of small anti-Islam rallies have been held across Australia, with police reportedly forced to intervene to separate protesters from rival, anti-racism demonstrators in the city of Melbourne.

Between 500-800 people gathered in the pouring rain in Martin Place in Sydney’s central business district on Saturday for one of the largest demonstrations, which were held in a number of state capitals and regional centres.

A speaker, who called himself “the great Aussie patriot”, addressed the Sydney crowd, saying: “Out of the world’s 1.5 billion Muslims that live on this planet, only 15-20 percent of them are extremists, yet 15-20 percent is around 300 million extremist Muslims who are dedicated to the takeover and downfall of western civilization.”

“Now Muslims have an average of five to eight children per family. So the number of extremists raising all their kids with this point of view…”

One protester, who identified himself as Greg, told Al Jazeera “we’re just fighting for our way of life”.

“[Muslims] come here to live in Australia and they want to change our values, our way of life, to suit them. They come here for a new life – and they want their old life. So why stay here if they don’t want it? They can leave -simple as that.”

In Melbourne, the Herald Sun newspaper reported that 100 police had to physically stand between anti-Islam demonstrators and counter-protesters in the city’s Federation Square top prevent clashes.

“It’s basically implicating good Muslim people in the political movements of a tiny minority,” she said.

“What we’re trying to say is that it is dangerous to allow hate speech to occur on the streets of Melbourne.”

Reclaim Australia, the group that organised the protests, says on its website that it wants to make Islamic law illegal in Australia, ban Halal certification, ban the teaching of Islam in public schools and ban “the burqa or any variant thereof”.

“This peaceful rally … is being used to show the people of Australia we have had enough of minorities not fitting in and trying to change our Australian cultural identity,” the group said.

The group also says it wants to keep Australia’s “traditional values” and “introduce pride in the Australian flag and anthem at all levels of schooling”.