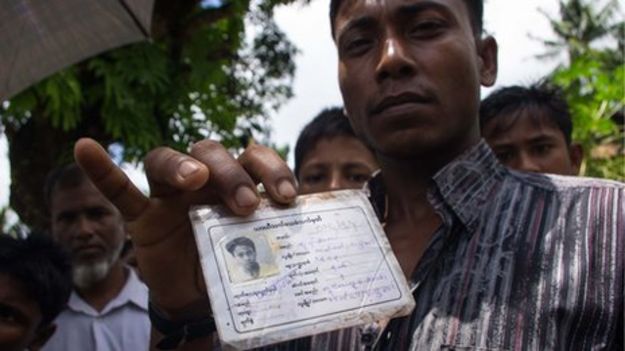 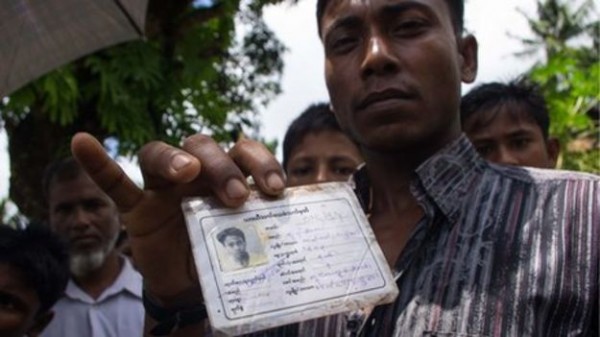 By: Simon Lewis and John Zaw

Holding up a small white card — the only form of identification he has ever possessed — Sultan Ahmed is steadfast.

“I will not hand this card over to the authorities,” says the wiry 16-year-old Muslim Rohingya, interviewed by ucanews.com last week at Thae Chaung camp for internally displaced persons (IDPs) in Sittwe township, Rakhine state.

Sultan Ahmed’s is one of as many as 900,000 white-colored Temporary Registration Cards held by people living in Myanmar. Such IDs, however, are all about to become meaningless. By presidential decree, the cards will expire today, after which time holders of the so-called White Cards must hand them over to authorities.

“I’m going to hold onto it, even if it is not valid,” says Sultan Ahmed. “I’m afraid that if the government takes this from me, they might do something to harm me later.”

In June 2012, when the shanties of Sittwe’s Muslim neighborhoods went up in flames and violence between Rohingya Muslims and Rakhine Buddhist raged, Sultan Ahmed was fortunate to be away from his home, visiting friends in another village.

“My parents lost their documents in the fire. I only have it because it was in my pocket,” he said. “I still hope that I will be able to use it again in the future.”

White Cards and the claims to citizenship they represent are a highly charged political issue in a country in the throes of a faltering transition from centralized military rule toward something like a federal democracy.

The ethnic Rakhine community rejects the existence of the Muslim group calling themselves Rohingya. Members of the Buddhist ethnic group — itself subjected to oppressive rule by the ethnic Bamar who dominate Myanmar’s ruling elite — insist that the majority of Muslims living in Rakhine state are recent illegal immigrants from Bangladesh. The Myanmar government does not recognize Rohingya as one of its national races, blocking most of them from citizenship although many claim to trace their roots in the country back generations.

After Myanmar’s Union Parliament decided on February 2 to grant White-Card holders the right to vote in a constitutional referendum, protests from Rakhine people, monks and other Buddhists began immediately.

The order promising the cards’ expiration came within days. President Thein Sein’s February 11 statement said the cards must be handed over within two months of March 31 in a process he promised would be “fair and transparent.” But some fear that if officials attempt to seize the documents, they will risk sparking further unrest.

In the past, White Cards enabled Rohingya to move freely between villages, access some education and health services, and offered a crumb of hope that they may one day gain citizenship.

But the more than one million Rohingya in Rakhine state do not now have much opportunity to use identification. In most of the state, segregation is enforced by security forces who restrict their movements, and Sittwe, the state capital, remains a town divided on ethnic and religious lines.

More than 100,000 Rohingya IDPs, as well as Rohingya host communities, are confined to a cluster of small villages and 20 official camps sitting precariously between strictly maintained police checkpoints and the Bay of Bengal, on which tens of thousands have attempted a perilous escape by boat toward southern Thailand and Malaysia.

Although most Muslims in Sittwe are thought to hold White Cards, the majority reject the idea of handing them over to officials. On visits to camps by ucanews.com reporters, dozens of people denied that they had managed to bring the their cards when they fled their homes in 2012.

“Some people here have White Cards but they won’t tell you they have them,” said U Ba Kyaw, a camp committee member in the sprawling Ohn Daw Gyi camp. The camp is home to about 12,000 people living in four adjacent settlements of 15-meter-long huts. Each “longhouse” provides cramped quarters to 10 families, most of which count at least five members.

“People here are scared they might have to hand their White Cards over to the government and they will be left with no papers,” U Ba Kyaw said, pointing out that the president’s announcement did not specify whether replacement documents would be distributed. “If the officials come, they will say that they don’t have their cards.”

In the ethnic Rakhine neighborhoods of Sittwe, where smashed-up mosques are guarded by police, residents have raised the Buddhist flag outside their homes to signal opposition to voting rights for White-Card holders. Crude posters declare: “We don’t accept the Union Parliament’s decision on the White Card issue.”

The president’s intervention suggests that they will get their way, but local leaders insist that they want to make sure that the Muslim community, known as “Bengalis” and suggesting they belong in Bangladesh, is denied suffrage in any referendum, as well as in a national election expected in November.

“After the remarks of President Thein Sein, it is a relief for us, but we are still waiting,” said former teacher U Than Tun, a leading member of the Rakhine community, adding that other legislation and electoral rules should be amended to exclude White-Card holders from politics. “The poster campaign is the first step. If the government allows them to vote, we will boycott the national election.”

White Cards were initially issued beginning in 1993 as a temporary measure pending a process to verify residents’ claims to citizenship against criteria set out in Myanmar’s 1982 Citizenship Law. They are also held by people of Chinese or Indian descent elsewhere in the country, but the majority of White-Card holders are thought to be Rohingya Muslims.

Many have been holding the cards for more than two decades, but the ire of Rakhine people was stirred by the Union Solidarity and Development Party when the military-backed party handed out an unknown number of new White Cards in the run-up to an election in 2010. The party won the poll nationwide, in the absence of the main opposition, and took most of the seats representing Rakhine state.

Than Tun, who also sits on a state-level committee that scrutinizes aid projects in Rakhine state, said Muslims bear responsibility for the conflict in Rakhine state, citing alleged incidents of rape and attacks on Buddhists in the Muslim-majority northern part of the state, which sparked the tit-for-tat attacks that have led to claims of ethnic cleansing.

Most members of the Muslim community were not entitled to citizenship under the law, he said. “They are not citizens. These people are lucky to be allowed to stay in these camps,” he said. “No other country will accept this Bengali community. Why should we?”

While Rakhine leaders keep up the pressure, authorities in Sittwe appear to have taken steps to prevent the Rohingya from organizing themselves.

In Thetkepyin, a village that lies among the camps but predates the violence, residents have repeatedly asserted that they wish to identify as Rohingya, despite government efforts to deny them that option.

In April 2013 officials visited the village to conduct a population registration exercise. According to resident Ibrahim Khalil, 53, the officials ran into trouble at the first house they tried, when they asked a teenage boy to confirm his ethnicity as Bengali.

“He said, ‘No, I’m Rohingya,’” Ibrahim Khalil recounted. “School was coming out at that time, and the students started chanting: ‘We are Rohingya! We are Rohingya!’ Soon, others joined in and there was a big protest.”

However, Kyaw Myint, community leaders Ba Thar and Hla Myint, as well as Ibrahim Khalil’s brother, Kyaw Khin, 45, were soon detained and faced charges of “rioting,” “causing voluntary grievous hurt to a public servant in the discharge of his duty” and “banditry”.

After their conviction, they each served months-long jail sentences before being released during 2014. However, after legal appeals by the state, they were rearrested this month and three of them had their prison sentences extended to eight years. Kyaw Khin, who is the official administrator of Thetkepyin, got five more years.

Ibrahim Khalil insisted that neither his brother nor the other community leaders were violent toward the officials during the 2013 incident. Amnesty International this week said the four were prisoners of conscience and called for their unconditional release.

“These are the leaders of this community,” Ibrahim Khalil told ucanews.com. “When there are no leaders in the village, there is confusion over what to do about the White Cards.”

In a statement highlighting the case, international campaigners Fortify Rights said the charges were “trumped-up”.

“The authorities are sending a clear message to Rohingya that any form of resistance will be met with reprisals,” Matthew Smith, executive director of Fortify Rights, said in the statement. “This is a thinly veiled attempt to undermine the community’s social and political structures. It’s a textbook example of persecution.”

Rahana, 41, the wife of the detained Kyaw Khin, pleaded that her husband had been taken away from her for no good reason. Her husband is an honest man, she told ucanews.com, pointing out he had been selected as a community leader by local residents.

“He’s not a troublemaker,” Rahana said. “He’s a simple man, he doesn’t want to be involved in any trouble. We have five children and my husband has now been taken away twice. This is very painful.”