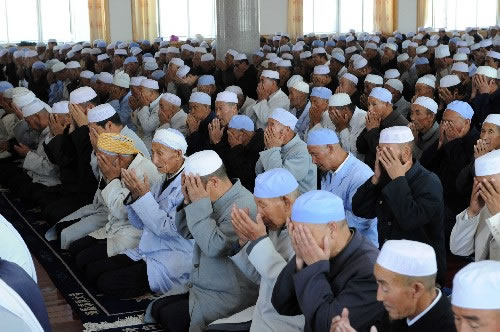 A Uighur Muslim has been sentenced to six years in prison by a Kashgar court for growing beard, in a ruling condemned by Xinjiang Muslims as “absurd”.

“This is a case that would not happen in any other country in the world,” Dilxat Raxit, a spokesperson for the exile World Uighur Congress, said in a statement cited by Agence France Presse (AFP) on Monday, March 30.

“It is unacceptable and absurd. It exposes China’s hostile attitude and crisis of governance.”

Earlier this week, Chinese newspapers reported that a 38-year-old Uighur Muslims has been sentenced to six years in jail for growing beard, while his wife was given two years for wearing face veil or niqab.

The man “had started growing his beard in 2010” and his wife “wore a veil hiding her face and a burqa, the China Youth Daily said.

Xinjiang authorities claimed that the couple was found guilty of “picking quarrels and provoking trouble”.

Since April 2014, authorities of Xinjiang started offering cash rewards to informantswho report on their neighbors for wearing beards.

Earlier this month, a top communist party leader in Kashgar warned against donning the Islamic headscarf, describing the city as a “frontline” in its battle against extremism.

Earlier in December, China banned the wearing of Islamic veiled robes in public in Urumqi, the capital of the province of Xinjiang.

The law in the predominantly Muslim region came as Beijing intensified its so-called campaign against “religious extremism” that it blames for recent violence.

While hijab is an obligatory code of dress for Muslim women, the majority of Muslim scholars agree that a woman is not obliged to wear the face veil, or niqab, but believe that it is up to women to decide whether to cover her face.

Condemning the ruling, the spokesperson for Uighur Congress said the case was “typical of the political persecution” faced by Uighurs in China’s Muslim-majority province of Xinjiang.

“If a Chinese person grows a beard, it is a personal fashion he is allowed to choose freely. If a Uighur grows a beard, he is a religious extremist,” Raxit of the Uyghur congress said.

“China’s goal is to use judicial means to force Uighurs to accept Chinese people’s traditions and give up their own way of life.”

“Chinese court jails a man for 6 years for growing beard.. This is called Oppression #AdarshLiberals” one Twitter user wrote.

Another user said: “Feeling strange when growing a beard or wearing hijab? Don’t worry, Allah has promised glad tidings for such strangers!”

Uighur Muslims are a Turkish-speaking minority of eight million in the northwestern Xinjiang region.

Xinjiang, which activists call East Turkestan, has been autonomous since 1955 but continues to be the subject of massive security crackdowns by Chinese authorities.

Rights groups accuse Chinese authorities of religious repression against Uighur Muslims in Xinjiang in the name of counter terrorism.

Earlier in 2014, Xinjiang banned the practicing of religion in government buildings, as well as wearing clothes or logos associated with religious extremism.

In August, the northern Xinjiang city of Karamay prohibited young men with beards and women in burqas or hijabs from boarding public buses.