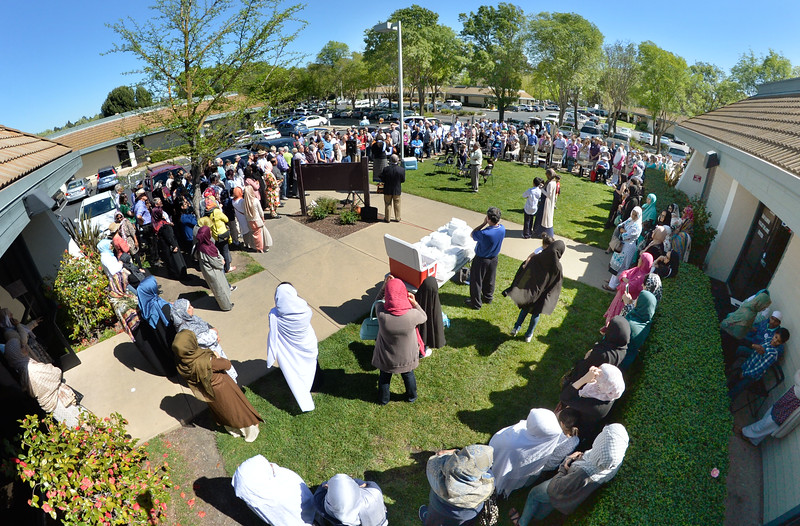 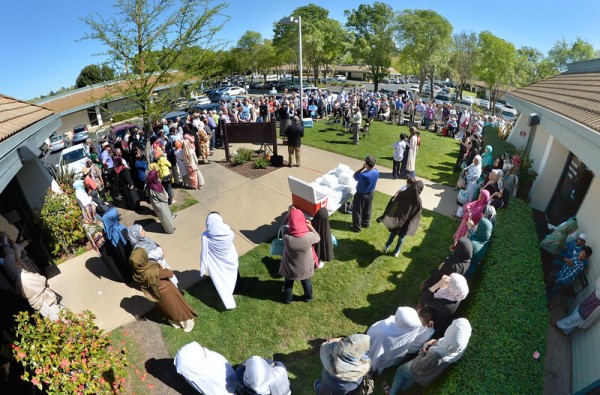 Maimoona Ahmed knows she has fit someone’s stereotypical idea of “terrorist” while donning her head scarf and traditional clothing, at least a couple of time at airports.

The last time, she simply responded with a sigh to the black curbside check-in agent: “You know what it is, it’s like driving while black, flying while Muslim” and it seemed to make him identify right away what it feels like to be “the other.”

She says people might need to work even harder to make those kinds of connections of compassion and empathy these days with the recent stream of stories of anti-Muslim violence in the United States and the world. The stories give her and many others a heavy heart.

“February was a hard month for Muslims in the United States,” fellow Muslim Maram Bata, of Orinda, told a circle of more than 150 people gathered for a “Ring of Solidarity” interfaith event that was held on Friday afternoon at the San Ramon Valley Islamic Center mosque as a show of love and support to Muslims, locally and worldwide, who have been chilled by recent acts of Muslim hatred.

“But there are 1.6 billion diverse Muslims in many countries and continents,” Bata said. “And this is how a lot of Muslim feel — it’s too much to bear.”

That recent rise of anti-Muslim hate and violence, which some believe has been stoked by the film American Sniper and the Charlie Hebdo killings, troubled Bata so much that it made her fall silent during a discussion about three weeks ago during a women’s interfaith prayer circle held at an Orinda home.

Bata, when asked later why she was so quiet, explained that it was because she was feeling the weight of being Muslim in America.

One of the group’s Buddhist members, after hearing of Bata’s worries, said that she was inspired by the Circle of Peace event in Norway, in which the Muslim community formed a circle of protection and support in response to an attack on a group of Jews, surrounding their synagogue during prayers. Similar circles have been held in Copenhagen and Stockholm.

The idea flowered into a local event, which organizers say they believe makes it the first one of its kind in the United States.

“It just caught fire, and everyone started to grab a hold of this,” said Rebecca Calahan Klein, a member of the Temple Isaiah in Lafayette.

The event was sponsored by the Interfaith Council of Contra Costa County, Interfaith Council of San Ramon Valley and Neighbor to Neighbor, which collectively represent about 150 congregations and faith organizations in and around Contra Costa County. Members of many faiths, including Christian, Jewish, Muslim, Buddhist, Sikh and even the Bahai religions, encircled the largest mosque in the county.

Local Rabbi Daniel Goldblatt, a senior rabbi at the Beth Chaim Congregation in Danville, then led the circle, with the young and old, in a song and prayer. It made a number of Muslims teary-eyed.

Afterward those gathered were invited to walk into the mosque together and break into small groups to get to know each other better.

That’s because “the best way to love your neighbor is to get to know them,” said Terence Clark, president of the Interfaith Council of Contra Costa County.

After such sadness at recent anti-Muslim violence, Bata said Friday’s gathering had given her a new sense of hope and unity. It shows the power that everyone has to make a difference and speak out against injustice, she said.

“No idea or action is too small,” she said. “And here we are. This is the power of knowing each other and working as one human body.”

A flurry of such stories hit the press last month, from the murder of three Muslim-American students in Chapel Hill, North Carolina, over disputes over a parking space and the brutal attack of an Arab-American man by two men at a Kroger supermarket in Dearborn, Michigan, to the torching of an Islamic center in Houston to hate graffiti scrawled at a Rhode Island mosque.