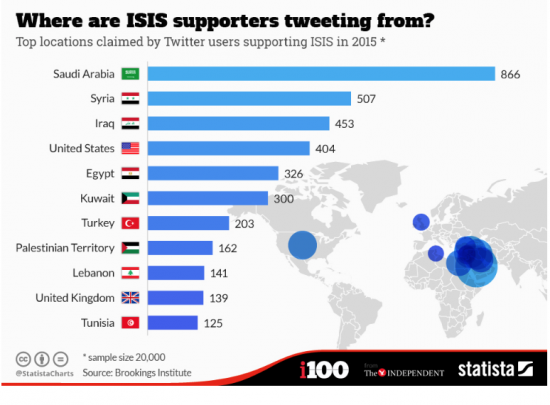 Reviewing millions of accounts, and whittling down the group of perceived pro-Islamic State tweeters to around 46,000 accounts, the actual number of accounts that were heavily analyzed totaled 20,000.

The Brookings crew noticed a few telling facts in all of the data.

Combining minimal geo-locating data (very few supporters allow themselves to be tracked), time zone and location information in user profiles, Brookings created a list of the places where they believe the pro-Islamic State tweeters were based.

As detailed in the above chart, Saudi Arabia leads all other countries with 866 pro-Islamic State Twitter users. Syria and Iraq, two countries the Islamic State considers to be at the center of its new caliphate, are second and third in terms of total numbers.

While the U.S. has the fourth highest number of pro-Islamic State accounts, the Brookings study adds a caveat, speculating, “We are reasonably certain some ISIS supporters deceptively listed locations in the United States in order to create the appearance of a homeland threat.”

Also worth noting, the only other English-speaking country among the top ten list of Islamic State-supporting Twitter accounts is the United Kingdom at number ten.

With eight out of the top ten countries supporting ISIS on social media based in the Middle East, it is also not a surprise nearly three-quarters (73 percent) of the accounts Brookings identified chose Arabic as a primary language, with English coming in second with 18 percent and French was third with 6 percent.

News of the Islamic State’s use of social media to push its message out across the world forced Twitter to make changes to how the company handled users and posts.

Brookings reported, “A minimum of 1,000 ISIS-supporting accounts were suspended between September and December 2014, and we saw evidence of potentially thousands more.”

Suspended accounts may have helped to mute the message of the Islamic State, but the study also speculated it might have the opposite effect and “could increase the speed and intensity of radicalization.”

In terms of the kind of technology used by Islamic State sympathizers to post on Twitter, Android phones dominate with 69 percent and Apple users make up 30 percent of the group, with Blackberry barely registering. Android’s global market share was recently reported to be over 81 percent, with Apple’s slice of the smartphone market slipping a bit to just 14.8 percent.