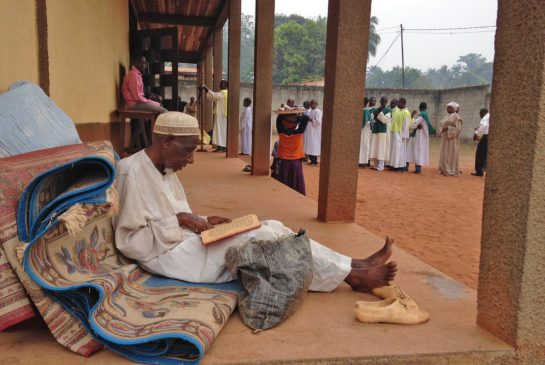 Central African Republic has been rocked by sectarian violence since 2013. That year, mostly Muslim Seleka rebels seized power, and their brutal rule led to the rise of Christian militias that unleashed a wave of violence against Muslims. U.N. and French troops are now trying to stabilize the country. Targeted attacks against Muslims are subsiding, although tensions remain.

As calm returns, Muslims who fled the attacks have begun to trickle home, and 10 mosques have reopened in the capital, Bangui, in recent weeks.

The mosques that have reopened are in heavily Muslim neighborhoods and so escaped destruction, according to Aliou Ousseini, one of the country’s most influential imams. Some of them sustained heavy gunfire, but are still standing. Others simply need a lick of paint after months of neglect, he said.

But the vast majority of the country’s mosques — 417 out of 436 — were destroyed in the violence between Christians and Muslims, Samantha Power, the U.S. ambassador to the United Nations, said recently.

The violence that broke out this weekend began when Muslim herders noticed that their cattle had been stolen, said Auguste Magoussou, a resident of one of the villages in the central part of the country. In retaliation, they ransacked villages, with the help of fighters from the country’s Muslim rebels, he said. He said he saw 11 people killed.

Mahouloud Moussa-Moctar, a spokesman for the rebels, denied they took part in the violence.

The attacks have emptied out nine villages, and the residents are now seeking refuge in the main town in the region, Kaga-Bandoro, Magoussou said. Other villagers there told him that they had seen many more people killed.