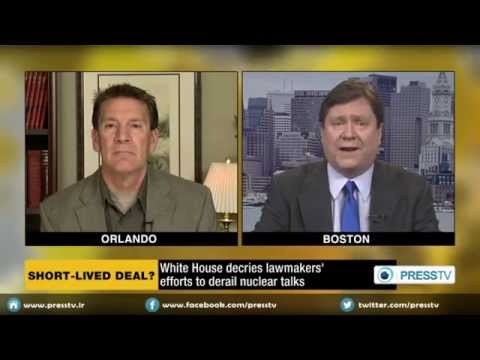 The fallout from the open letter sent by 47 Republican senators to Iran’s leaders reverberated worldwide Wednesday from Washington to Tehran.

Cotton, from the state of Arkansas, authored the open letter to Iranian officials, criticizing U.S. President Barack Obama’s attempts to reach a deal on nuclear power with the country.

IRNA accused Cotton of trying to “humiliate” Zarif by posting a Farsi version of his letter and by tweeting directly to Zarif: “This is the translation of the letter if necessary.”

“Now it is clear that Cotton does not know that the Iranian foreign minister has been a U.S. educated figure since young age and he knows English language and the U.S. power structure better than Cotton,” IRNA reported.

On Monday, Zarif’s initial response was to describe the letter as a “publicity ploy” that “contradicts international law.”

And the Tehran Times reported that Zarif said the U.S. senators were “ignorant of international law.”

Foreign ministers involved in the P5+1 talks will meet Sunday in Switzerland as they try to reach a political framework for a nuclear deal with Iran by March 31.

Other members of the P5+1 group — China, Russia, France, Britain and Germany — were mostly silent in their reaction to news of the letter to Iran. There were no official statements regarding the letter.

In London, Foreign Secretary Philip Hammond told members of Parliament Tuesday that the Republican letter could throw “a spanner in the works” at the negotiations and will have an “unpredictable effect” on the government in Tehran.

The Guardian’s Julian Border wondered if Republican intervention in Iranian nuclear negotiations would confirm Tehran’s suspicions about the West and make it easier for Iran to blame Washington if talks fail.

“The ‘spanner’ effect was on display in the Iranian capital where the hard-line press splashed news of the letter across its front pages. The moderate media focused instead of Zarif’s rebuke. But what really counts is the impact on one person, the Supreme Leader, Ali Khamenei. His judgment will be critical in determining whether there is an agreement at all, and he is famously suspicious of the West’s motives towards Iran,” Border wrote.

In Israel, the Jerusalem Post wrote an editorial that said, “The subtext of the GOP letter to the Iranians is: Think twice before signing a deal with a lame-duck president.”

Israel Hayom, a newspaper owned by Sheldon Adelson, an American billionaire who has supported several Republican presidential candidates, used wire and staff reports under the headline “Republicans warn Iran nuclear deal with Obama may not last.”

The injection of partisan politics into the Iran negotiations guarantees that it will be an issue during the 2016 presidential campaign.

Several senators who are considered possible presidential candidates — Marco Rubio of Florida, Lindsey Graham of South Carolina, Ted Cruz of Texas and Rand Paul of Kentucky — all co-signed the letter.

Hillary Clinton, a former secretary of state and a likely Democratic presidential candidate, voiced her disapproval of the Republican senators’ letter during a news conference Tuesday in which she addressed the controversy over her use of private emails.

“One has to ask, what was the purpose of this letter?” Clinton said. “There appear to be two logical answers. Either these senators were trying to be helpful to the Iranians or harmful to the commander-in-chief in the midst of high-stakes international diplomacy. Either answer does discredit to the letters’ signatories.”

On Wednesday, testifying before the Senate Foreign Relations Committee, Secretary of State John Kerry said he responded with “utter disbelief” at the letter. It endangered global trust in America, he said, and “risks undermining the confidence that foreign governments in thousands of important agreements commit to.”

Kerry also said the letter broke with 200 years of precedent in the conduct of U.S. foreign policy.

“No one is questioning anybody’s right to dissent,” he said. “But to write to the leaders in the middle of a negotiation — particularly the leaders they have criticized others for even engaging with — to write them and suggest they’re going to give a constitutional lesson, which by the way is incorrect, is quite stunning.”

Kerry is leading the Iran nuclear negotiations, which resume next week in Switzerland. Those talks are in a critical phase because all sides have set the end of March as a deadline for a political framework. Kerry said the Republican senators’ letter was wrong about a very important point.

The letter’s contention “that Congress could actually modify the terms of an agreement at any time is flat wrong,” he said. “You don’t have the right to modify an agreement reached executive to executive between leaders of a country.”

Foreign Relations Committee Chairman Bob Corker of Tennessee is co-sponsoring bipartisan legislation that would let Congress weigh in on the merits of a potential Iran nuclear deal and on easing sanctions. Corker did not sign the letter, but he said he was disappointed by Kerry’s comments that Congress cannot modify a deal.

“You have gone back on your statement that any agreement must pass muster with Congress,” he said. “The way that we pass muster here is we vote.”

Republican Senator James Risch of Idaho defended his decision to sign the letter.

“This indignation and browbeating over this letter is absolute nonsense,” he said. “Each that signed it is an elected member of the United States Senate, and it is the first branch of government. To say that we should not be communicating [with foreign leaders] is nonsense.”