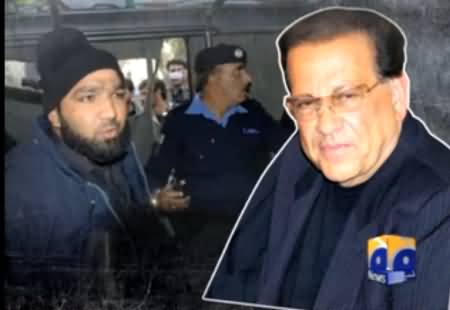 Former police commando and bodyguard was sentenced to death for the killing of Punjab Governor Salman Taseer in 2011.

A Pakistani court has upheld the death sentence for a former police commando, who was convicted of killing Punjab Provincial Governor Salman Taseer, whom he had accused of blasphemy, according to Reuters news agency.

The ruling against Elite Police Force member Mumtaz Qadri on Monday was a surprise to many who had expected the killer’s sentence might be reduced, amid growing threats to lawyers and judges hearing blasphemy-related cases.

Judge Noorul Haq Qureshi, however, threw out terrorism charges against Qadri, who shot and killed Taseer in 2011 in an upscale neighbourhood in the capital, Islamabad.

Qadri was convicted and sentenced in late 2011. But he is viewed as a hero by many people who thought Taseer was a blasphemer, who called for reforms in the law.

Even though the court on Monday upheld the death sentence, it is unclear whether it will ever be carried out.

Qadri’s lawyer, Mian Nazir, told the Associated Press news agency that the decision to throw out the terrorism-related charges was a “big relief” and that he would continue to appeal against the death sentence.

Pakistan has thousands of people on death row but also has a moratorium on carrying out executions.

Prime Minister Nawaz Sharif partially lifted the moratorium in December, allowing it to be used in terrorism-related cases.

Pakistani legal expert Salman Akram Raja told AP that the decision puts Qadri in a “relatively better position” since his case is no longer a terrorism-related case, for which authorities can now carry out the death penalty. But that could change in the future, Raja cautioned.

Qadri is now able to try to strike an out-of-court settlement with Taseer’s family – something he would not be able to do if he were still facing the terrorism charges, Raja said.

Under Pakistan’s legal system, people convicted in certain cases can pay so-called “blood money” to the families of their victims to gain their freedom.

The country’s harsh blasphemy laws allow for anyone convicted of insulting Islam or the Prophet Muhammad to be sentenced to death. Despite this, people often take the law into their own hands, killing those accused of blasphemy.

A group of Qadri’s supporters gathered outside the court on Monday blocked a main road and chanted slogans against the decision.

The killing highlighted a growing gulf between conservatives and more liberal elements in society. Qadri was hailed by some lawyers when he arrived in court days after killing Taseer whom he was tasked to protect.

Two months after Taseer’s murder, Minister for Minorities Shahbaz Bhatti, a Christian, was murdered by the Taliban for demanding changes to the blasphemy law.

The judge who convicted Qadri was forced to flee the country after death threats.