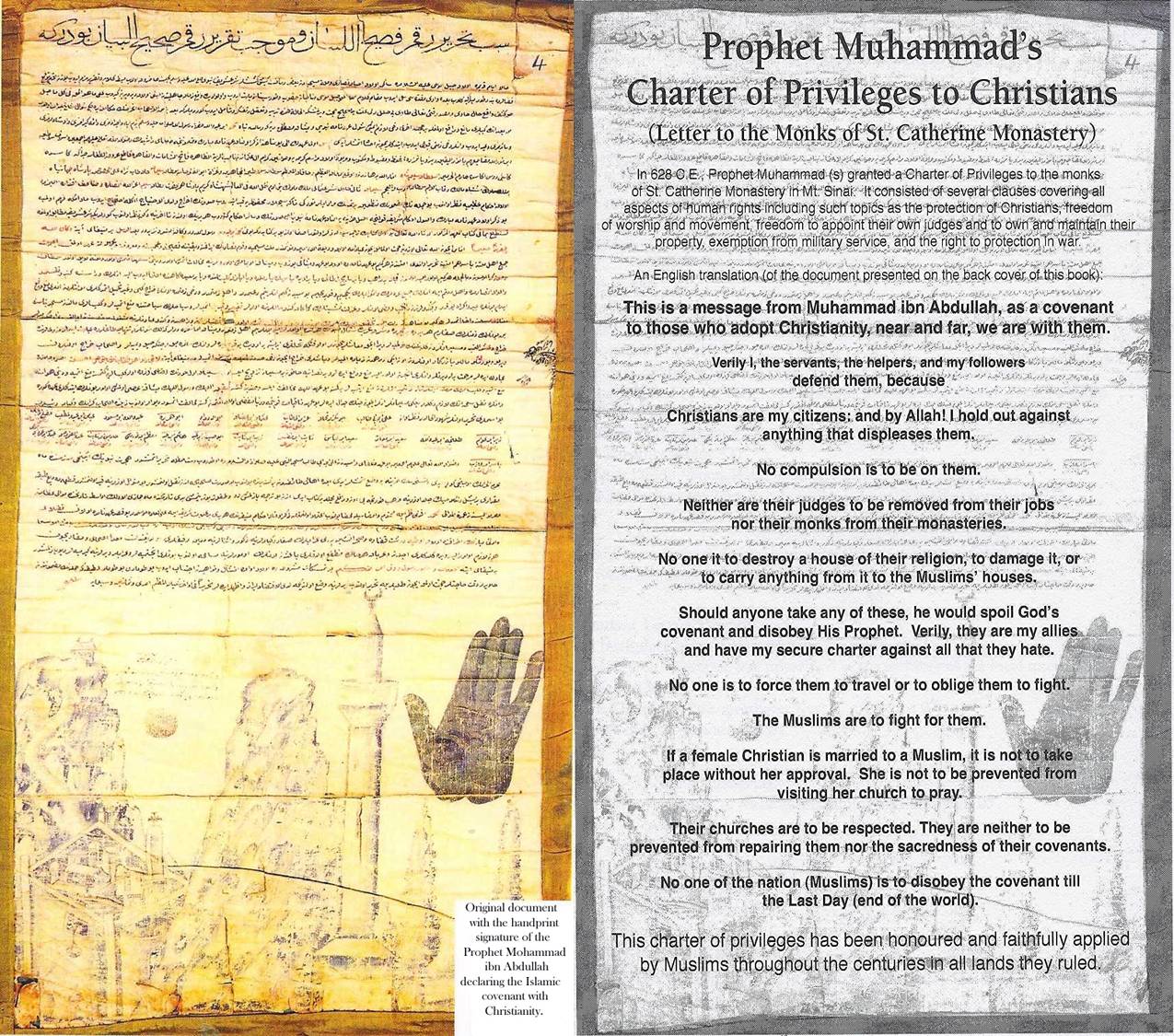 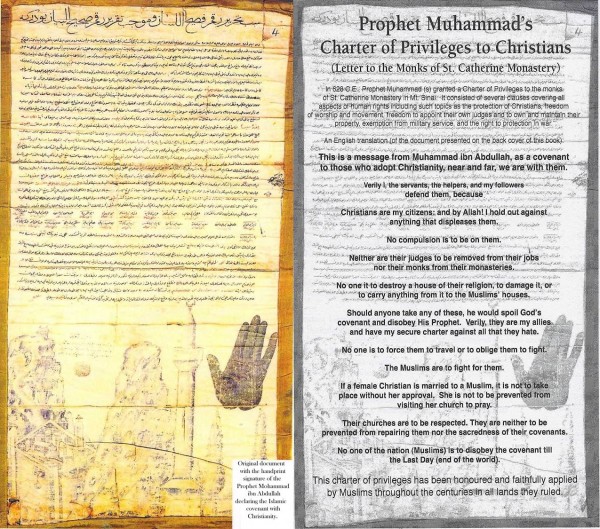 In the Name of Allah, the Most Compassionate, the Most Merciful.

(A copy of the manuscript of the covenant [‘ahd] written by Muhammad, the son of ‘Abd Allah, may the peace and blessings of Allah be upon him, to all the Christians.)

This covenant [kitabun] was written by Muhammad, the son of ‘Abd Allah, the proclaimer and warner [bashiran wa nadhiran], trusted to protect Allah’s creations [wadi‘at Allah fi khalqihi], in order that people may raise no claim [hujjah] against Allah after [the advent of] His Messengers [rusul] for Allah is Almighty, Wise.

He has written it for the members of his religion [ahl al-millatihi] and to all those who profess the Christian religion in East and West, near or far, Arabs or non-Arabs [‘ajami], known or unknown, as a covenant of protection.

If anyone breaks the covenant [‘ahd] herein proclaimed, or contravenes or transgresses its commands, he has broken the Covenant of Allah, breaks his bond, makes a mockery of his religion, deserves the curse, whether he is a sultan or another among the believing Muslims.

If a monk or pilgrim seeks protection, in mountain or valley, in a cave or in tilled fields, in the plain, in the desert, or in a church, I am behind them, defending them from every enemy; I, my helpers [awani], all the members of my religion [ahl al-millati], and all my followers [atbai], for they [the monks and the pilgrims] are my protégés and my subjects [ahl al-dhimmati].

I protect them from interference with their supplies and from the payment of taxes save what they willingly renounce. There shall be no compulsion or constraint against them in any of these matters.

A bishop shall not be removed from his bishopric, nor a monk from his monastery, nor a hermit from his tower [sawma‘], nor shall a pilgrim be hindered from his pilgrimage. Moreover, no building from among their churches [bayt min buyut kanaisihim] shall be destroyed, nor shall the money [mal] from their churches be used for the building of mosques or houses for the Muslims. Whoever does such a thing violates Allah’s covenant [ahd Allah] and dissents from the Messenger of Allah.

Neither poll-tax [jizyah] nor fees [gharamah] shall be laid on monks [ruhban], bishops [asaqifah], or worshippers for I protect them, wherever they may be, on land or sea, in East and West, in North and South. They are under my protection, within my covenant [mithaqi], and under my security [amani], against all harm [makruh].

Those who also isolate themselves in the mountains or in sacred sites shall be free from the poll-tax [jizyah], land tribute [kharaj] and from tithe [‘ushr] or duty on whatever they grow for their own use, and they shall be assisted in raising a crop by a free allowance of one qadah [unit of dry measure] in every ardabb [= 6 waiba = 24 rub‘a] for their personal use.

They shall be not obliged to serve in war, or to pay the poll-tax [jizyah]; even those for whom an obligation to pay land tribute [kharaj] exists, or who possess resources in land or from commercial activity, shall not have to pay more than twelve dirhams a head per year.

On no one shall an unjust tax be imposed, and with the People of the Book there is to be no strife, unless it be over what is for the good [5:48]. We wish to take them under the wing of our mercy, and the penalty of vexation shall be kept at a distance from them, wherever they are and wherever they may settle.

If a Christian woman enters a Muslim household, she shall be received with kindness, and she shall be given opportunity to pray in her church; there shall be no dispute between her and a man who loves her religion. Whoever contravenes the covenant of Allah [‘ahd Allah] and acts to the contrary is a rebel against his covenant [mithaqahu] and his Messenger.

These people shall be assisted in the maintenance of their religious buildings and their dwellings [mawadi‘]; thus they will be aided in their faith and kept true to their allegiance.

None of them shall be compelled to bear arms, but the Muslims shall defend them; and they shall never contravene this promise of protection until the hour comes and the world ends.

As witness to this covenant, which was written by Muhammad, son of ‘Abdullah, the Messenger of Allah, may the peace and blessings of Allah be upon him, to all the Christians.

As sureties for the fulfillment of all that is prescribed herein, the following persons set theirs hands.

The names of the witnesses:

This covenant [ahd] was written in his own hand by ‘Ali ibn Abi Talib in the Mosque of the Prophet, may the peace and blessings of Allah be upon him, on the third of Muharram in the second year of the Prophet’s Hegira.

A copy of this covenant has been deposited in the treasury [khizanah] of the Sultan. It was signed with the seal of the Prophet, peace be upon him. It was written on a piece of leather from Ta’if.

Blessed be he who abides by its contents. Blessed be he for he belongs to those who can expect the forgiveness of Allah.

With the order of the noble Sultan [sharif al-Sultani], that is still in effect, with the help of Allah, which was given to a community of monks who inhabit the Mountain of Tur-Sina’i because the copy, which was copied from the copy written by the Leader of the Believers, was lost, in order that his document be a support of the Sultan’s royal decrees which are evidenced by the records in the hands of the community in question.

This is a reproduction of the original [‘asl] without adapation [fadl wa wasl].

Written by the weakest of slaves,

The judge from Egypt, the Safeguarded [mahrusah], has pardoned them.

Sealed with the round seal and certified.