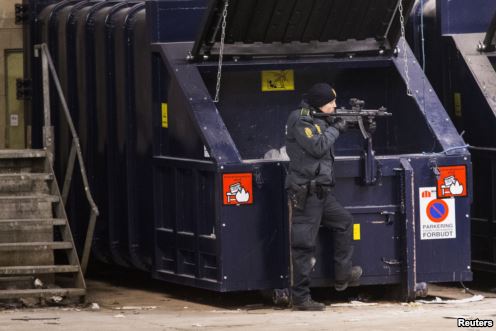 Danish police shot and killed a man early Sunday suspected in the slayings of two people in Copenhagen since Saturday, in what the country’s prime minister calls a “cynical act of terror against Denmark.”

Authorities said the Denmark-born 22-year-old alleged gunman was fatally shot after he opened fire on officers near a train station.

His previous criminal record included violence and weapons offenses, according to police.

Officials said no evidence suggests other gunmen were involved in the shootings, one at a free-speech event and the other outside a Copenhagen synagogue.

Police investigator Joegen Skov said Sunday, “We are still faced with a huge investigation. We need to make sure that our theory is in fact correct.

“A number of things indicate that we did get the right man, but we still have to investigate whether he acted alone, but at the moment there is nothing to suggest that any other perpetrators were involved,” Skov said.

In the first attack, a gunman with an automatic weapon killed one person and wounded three police officers at a cafe. Danish media identified the deceased as film director Finn Norgaard, 55.

The free-speech event was also attended by Swedish cartoonist Lars Vilks, who is known for provocative drawings, including a 2007 cartoon of the Prophet Muhammad that led to threats against the 68 year old.

The French ambassador to Denmark, Francois Zimeray, also attended the discussion. Both were unharmed in the shooting.

The United States condemned the attack at the cafe, calling it deplorable.

We remain in communication with Danish authorities and have offered to be of assistance in any way needed,” State Department Spokeswoman Jen Psaki said in a statement.

Hours later, volunteer Dan Uzan was guarding a bat mitzvah ceremony when he was killed and two police officers wounded in the synagogue shooting.

In light of the violence, Israeli Prime Minister Benjamin Netanyahu urged Jewish people in Europe to immigrate to Israel, as he did following a deadly attack on a kosher supermarket in Paris last month.

In commenting on the shootings, NATO Secretary-General Jens Stoltenberg said in a statement released Sunday, “I strongly condemn the shootings in Copenhagen. These are unacceptable attacks on our open, free and democratic societies and on the Jewishh community in Denmark.

“We stand together with our ally Denmark against terror,” the statement read.

Zimeray was expected to talk about the impact of last month’s attacks in France on the offices of the Charlie Hebdo satirical magazine and the kosher grocery.

Those earlier attacks by Muslim extremists left 20 people dead, including the attackers. The French magazine was known for mocking religion and had published several cartoons depicting the Prophet Muhammad.

Speaking from the Danish capital on Sunday, French Interior Minister Bernard Cazeneuve observed the similar reactions in both countries.

“I saw this morning the same sadness I saw in the terrified gaze of Parisians in the month of January (following Paris shootings). The same sadness, the same fright, the same dignity, the same contemplation and the same sorrow,” Cazeneuve said at a news conference.

Threats and attacks against cartoonists whose work has angered Muslims began with the publication of 12 editorial cartoons in the Danish newspaper Jyllands-Posten in September 2005. The paper said the cartoons, most of which depicted  the Prophet Muhammad, were part of an attempt to contribute to the debate about criticism of Islam and self-censorship.

The cartoons eventually led to protests around the world, including violent demonstrations and riots in some Muslim countries.

Between October 2005 and early January 2006, examples of the cartoons were reprinted in major European newspapers from the Netherlands, Germany, Scandinavia, Romania, and Switzerland. After major international protests, they were re-published around the globe, but primarily in continental Europe.

Numerous violent plots related to the cartoons have been discovered in the years since.

Artists other than cartoonists have also been the targets of Muslim ire for their work. British-Indian author Salman Rushdie’s novel Satanic Verses led to death threats made against him, including a fatwa calling for his assassination issued by Ayatollah Ruhollah Khomeini, the Supreme Leader of Iran, in 1989.

Dutch filmmaker Theo Van Gogh was killed in November 2004 by a Dutch-Moroccan Muslim angered by Van Gogh’s short film Submission, which criticized the treatment of women in Islam.

In neighboring Germany on Sunday, a carnival parade was canceled on short notice in the town of Braunschweig do to what authorities called a “concrete” threat of an Islamist attack.

Police did not reveal the nature of the threat.

European Union countries want to boost security and intelligence sharing amid mounting fears of radical Islam and more attacks to come. But Anne Giudicelli, founder of Paris analysis group Terr(o)risc, said these measures only address part of the problem.

“There is another answer to provide that is more political and cultural … (whether) Islam (is) compatible with European democracy and so on…I feel that is not the right debate,” Giudicelli said.

“The debate is: How we can produce such people who are our children? And how it comes that they want to kill people who are their own citizens?” she asked.