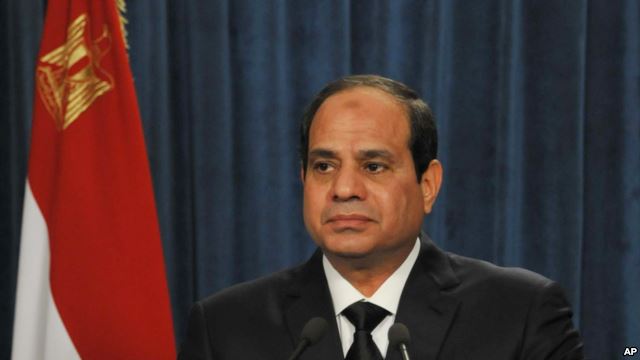 Egyptian and Libyan warplanes carried out airstrikes Monday against the Islamic State group in eastern Libya, the militaries said, in retaliation for militants beheading 21 Egyptian Coptic Christians who were kidnapped in Libya.

The bombings targeting militant camps and weapons storage sites in the town of Darna came hours after the Islamic State group released a video purporting to show the killings.

Egyptian President Abdel Fattah el-Sissi had pledged in a televised speech to respond to the beheadings, calling them an “abhorrent act of terrorism.”

“Egypt reserves the right of retaliation, and with the methods and timing it sees fit for retribution from those murderers and criminals who are without the slightest humanity,” he said.

In a statement late Sunday, White House Press Secretary Josh Earnest condemned what he called “the despicable and cowardly murder” of the Egyptians, and said the Islamic State’s “barbarity knows no bounds.”

“This wanton killing of innocents is just the most recent of the many vicious acts perpetrated by ISIL-affiliated terrorists against the people of the region,” Earnest said, using an acronym for the Islamic State group, “including the murders of dozens of Egyptian soldiers in the Sinai, which only further galvanizes the international community to unite against ISIL.”

The release of the video also brought swift responses by religious institutions in Egypt. The Coptic Church in a statement called on it followers to have “confidence that their great nation won’t rest without retribution for the evil criminals.”

The brutal murders were portrayed in the video as retaliation against what a masked fighter described as “the hostile Egyptian church.” Coptic Christians make up about 10 percent of the Egyptian population and suffer widespread discrimination and persecution.

Last month the extremist group released a video that showed the immolation death of a Jordanian pilot shot down over Syria as well as pictures purporting to show the execution of two Japanese hostages.

Since 2014, a number of persons from countries around the world have been beheaded by the Islamic State group. Some of the beheadings have apparently been conducted by an individual who appears in several videos speaking English with a British accent. He is known by the pseudonym “Jihadi John”.

Earlier this month the Islamic State group announced the death of American aid worker Kayla Mueller, but blamed her demise on airstrikes by the Jordanian military. The 26-year-old woman had been held by the Islamists for 18 months. Jordan and the United States have denied she was killed in a coalition airstrike.