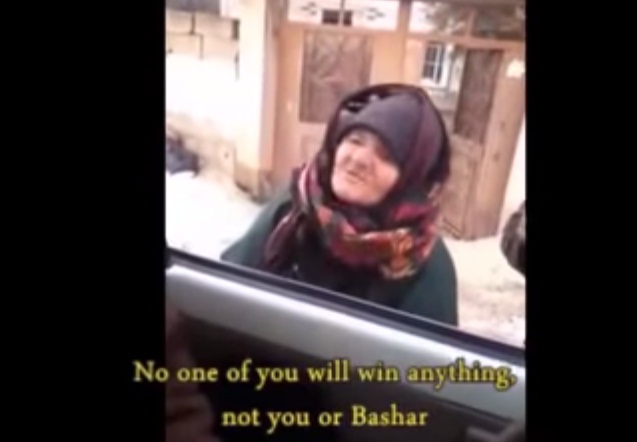 The granny who stood up to ISIS: Elderly woman filmed confronting militants and branding them ‘devils’ before quoting verses in the Koran that forbid slaughter. Two ISIS fighters were sitting in a car when the elderly woman approached. She told them the terror group is cursed and that they are not back by God. Militants initially plead with the woman to explain why she is so angry, But they soon begin mocking her and angrily tell her to leave them alone
The footage, believed to have been filmed in Syria, then cuts out and it is not known what happened to the elderly woman.

An incredible video has emerged showing the moment an elderly woman bravely confronted two Islamic State militants, telling them their terror group is cursed and that they are not back by God.

The video, which is believed to have been shot in Syria, shows the woman walks up to the fighters’ car, brand them both ‘devils’ and tell them: ‘I swear nothing you have done was in the way of God’.

Clearly shocked at being confronted, the men initially plead with the woman, telling her to explain what she means and asking if ‘everything is good between us?’.

The woman chooses to ignore the men’s attempts to justify ISIS’ brutality, however, and instead attacks their bloodthirsty savagery and accuses them of ‘killing each other like donkeys’.

Throughout the video the woman’s face twists in fury as she demands they stop killing people.

‘Do not slaughter anyone and nobody will slaughter you. It’s all forbidden. I swear nothing you have done was in the way of God,’ she says.

‘God is watching what you are doing. ‘Those who deny our verses and are arrogant towards them, the gates of heaven will not be opened for them, nor will they enter paradise,’ she adds.

The video then comes to an end without showing what became of the brave elderly woman.

The raids are the first the Jordanian military have announced since three straight days of aerial bombing – in retaliation for the killing of a pilot – that ended on Saturday. Mouath al-Kasaesbeh was burned to death by Islamic State militants two weeks ago.

‘The airforce has bombed and destroyed select targets of the Daesh criminal gang this afternoon,’ it said. ‘Daesh’ is a derogative Arabic term for the militants.