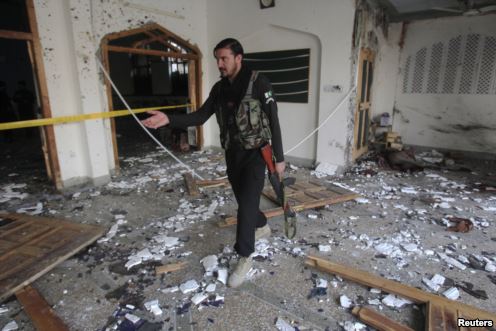 Militants attacked a Shi’ite mosque in Peshawar in northern Pakistan during Friday prayers, killing 20 people and wounding more than 40 others.

Eyewitnesses and authorities said the attackers, wearing uniforms of a provincial paramilitary force, threw hand grenades and fired automatic weapons at people in the mosque before two of them blew themselves up. A third was shot dead by mosque security guards before he could detonate his vest.  Police found unused hand grenades at the scene.

The attackers entered the mosque compound by cutting a barbed wire fence on a back wall adjacent to a nearby building under construction.

Attendance at mosques is usually highest on Fridays. More than 800 people had gathered for the weekly prayer service at the mosque called Imamia Masjid.

The Pakistani Taliban, which killed more than 150 people in a bloody attack on a school in Peshawar in December, claimed responsibility for the attack and warned of more to follow. Their spokesman, Khalifa Omar Mansoor, released pictures of three of the suicide bombers to the media, giving their names as Siddique, Aftab and Shahid.

Mansoor said the attack was in retaliation for the execution of Dr. Usman, who was involved in attacks on Pakistani army headquarters in 2009. He was executed December 19, after Prime Minister Nawaz Sharif lifted the moratorium on the death penalty in response to the Peshawar school attack.

Police said the pattern of Friday’s attack is similar to that of the assault on the Peshawar school.

The attack came a day after Pakistan army’s spokesman, Major General Asim Bajwa, told reporters that authorities had arrested or killed most of the men involved in the Peshawar school attack.

Two weeks earlier, at least 60 people were killed in an explosion in another Shi’ite mosque, in Shikarpur in southern Pakistan. The bombing occurred in the Lakidar area of Shikarpur, around 470 kilometers north of the port city of Karachi.

The Sunni Muslim group Jundallah, a splinter group of the Pakistani Taliban, claimed responsibility for that attack.

Sunni Muslim extremists have often targeted religious institutions of Shi’ites, who make up a fifth of Pakistan’s population.

A spokesperson for United Nations Secretary-General Ban Ki-moon issued a statement saying the U.N. chief is “deeply dismayed by such repeated targeting of innocent people on account of their religious beliefs and in their places of worship.”

The statement called on Pakistani authorities to “redouble their efforts to protect religious and ethnic minorities and to combat terrorism in all its forms.”