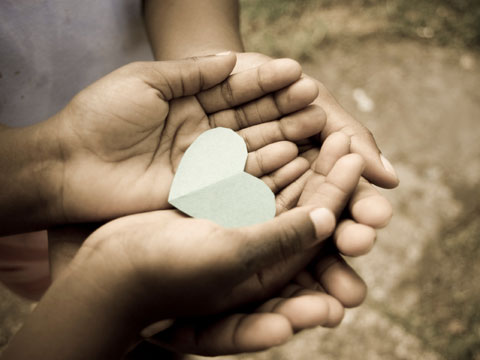 Giving money to the poor is an emblem of Islam and a sunna of the Prophet Muhammad (Allah bless him and give him peace). He was never asked for anything, except that he gave it, and he would give without fearing poverty. People said that he was more generous than the “sent wind” that brings the rain clouds.

To benefit from the charity you give it is important to keep certain things in mind that will lead to good in this world the next.

Allah says, “If you give charity openly then what a good thing it is; and if you give to beggars hidingly it is better for you than every thing, and He will remove some of your sins. And Allah is Aware of what you do.” (Qur’an 2:271).

For a Muslim, charity is given to stave off miserliness and to draw nearer to Allah, if instead the donor seeks fame, then the act of charity becomes worthless.

Giving in secret is often better for the donor since it protects against insincerity, and it is better for the recipient as it maintains his dignity.

Sometimes it is better to give charity publicly, so that others will also do the same. However, you must be on guard against any hypocritical notions.

Another danger of this is offending the dignity of the poor person. It may be hurtful to him to be seen to be needy.

Scholars say that if someone is asking for charity publicly, there is no need to worry about offending him by also giving publicly.

Any good you have earned by giving in charity can be wiped away by taunting and hurting the recipient.

Allah said, “O believers! Void not your charities by boasting of your favours conferred and injuring, like him who spent his wealth for showing to people and believes not in Allah and Last Day. Then the example of him is like that of a smooth rock on which is dust of earth; now a heavy rain fell upon it leaving it a bare stone. They shall have no control on anything of what they have earned and Allah guides not the infidels.”
(2: 264)

Taunting is to remind a person of a favour you did to them, while hurting them is making it known to others.

Some scholars say that taunting means to take advantage of a person you donated money to, and hurting them is to make them feel ashamed of their poverty.

Another view is that taunting is to make your charity an excuse for behaving arrogantly.

The cure for this is to remember that giving charity is to give what is due to Allah, as He has made it obligatory to give zakat.

It is important to think little of your donation in order to avoid pride which will make your good deed worthless.

Zakat is only a small percentage of your wealth, and to give only this is to be content with giving the bare minimum.

Even if you give more in addition to your zakat, it would be better to look instead at the amount of wealth you are withholding, rather than at what you are giving with pride.

Give of what is good

Charity should be taken from the best of your wealth, and from what is dearest to you. Giving in charity is like giving to Allah Most High, and so only give Him what is good.

Allah says: “O believers! Give something of your pure earnings and of what We produce from the earth for you; and intend not to give especially vile of it, whereas if you get of it, you will not accept unless you close your eyes in it. And know that Allah is free of all wants, Praiseworthy.” (Quran 2:267).

If the money you donate has been acquired dishonestly, it cannot be considered a good deed.
Ongoing charity (Sadaqa Jariya)

The best charity is that which continuously benefits people, such as helping to build a school, a clinic, or a water supply system, or helping a poor person start up his own business.

The Messenger of Allah (Allah bless him and give him peace) said: “When a person dies, his works end, except for three: ongoing charity, knowledge that is benefited from, and a righteous child who prays for him.” [Muslim, Tirmidhi]

This means that any good you do that benefits people even after you die will count for you.

The charity of the Companions

The Companions were also known for their immense generosity. According to some exegetes of the Qur’an, Ali ibn Abi Talib and his wife, Fatima al-Zahra fasted for three days and each day they gave all the food they had in charity.

Allah revealed a verse of Qur’an about them “And they feed, for love of Him, the poor. The orphan and the prisoner.” (Qur’an 76:8)

Other Companions, like Ka’b ibn Malik and Sa’d ibn Abi Waqqas would have given all their wealth in charity, except that the Prophet (Allah bless him and give him peace) told them to keep a portion for themselves and families [Bukhari, Muslim]

The false allure of hoarding up wealth

Man is attracted to wealth and is always in danger of becoming a miser. Allah says: “Adorned for men is the love of these lusts, women and children and the stored up heaps of gold and silver and branded horses and cattle and crops. This is the capital of living world; and it is Allah with Whom there is an excellent destination” (3:14).

There is nothing wrong in being wealthy but it is important to avoid being greedy and miserly. The Messenger of Allah (Allah bless him and give him peace) said: “No doubt this wealth is sweet and green. Blessed is the wealth of a Muslim, from which he gives to the poor, the orphans, and needy travellers [Bukhari, Muslim].

Tags: character charity Companions generousity On the Footsteps of the Companions Sadaqa Zakat