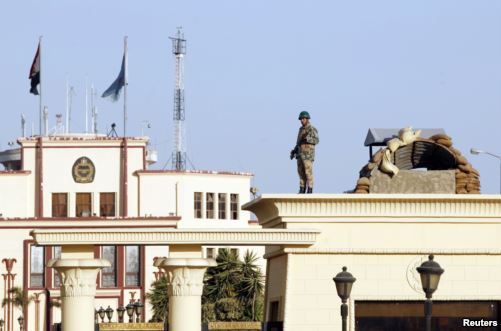 The Islamic State group’s affiliate in Egypt says it is responsible for a series of attacks on security personnel in the Sinai Peninsula Thursday that killed at least 26 people.

The Province of Sinai claimed responsibility for the multiple assaults that took place within hours of each other.

Officials say the insurgents’ weapons were aimed at a military base and a hotel in the town of Al-Arish where police and military officers live.

Egypt’s major government newspaper, al-Ahram, said its office directly across from the military base was destroyed. It did not say if there were any casualties in the building.

Egyptian President Abdel-Fattah el-Sissi, according to a statement Friday by the president’s office, has cut short a visit to Ethiopia for an African Union summit in order to return to Cairo to deal with the latest developments.

In another attack Thursday, suspected militants killed a senior army officer at a military checkpoint in Rafah.

Islamic extremists based in Sinai have attacked and killed hundreds of police and soldiers since the pro-Islamic president, Mohamed Morsi, was overthrown in 2013 and arrested by the military.

Egyptian authorities built a buffer zone along the border between Sinai and Gaza to stop weapons smuggling after a militant attack in October killed at least 30 soldiers.

The Province of Sinai group was known as Ansar Beit al-Maqdis until late last year, changing its name after swearing allegiance to the Islamic State.