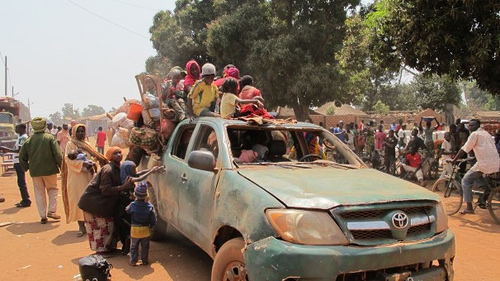 BANGUI, C.A.R.—The Central African Republic on Thursday rejected a cease-fire deal signed by rival militias that calls for amnesty for those responsible for more than a year of sectarian violence.

The talks, between a splinter group of the mainly Muslim Seleka alliance and a faction of the “anti-balaka” militia, were held in Kenya, outside the auspices of a government-led peace process in C.A.R.

The final draft of the accord called for a transitional government to be appointed to replace interim President Catherine Samba Panza’s cabinet. It also said French forces deployed in C.A.R. should be put under the command of a U.N. peacekeeping mission.

“The government categorically rejects the Nairobi accord because it was not associated with the discussions in any way,” Communications Minister Georges Adrien Poussou told Reuters. “It is not a real accord. Rather, it’s a series of grievances from the two armed groups which hold the country hostage.”

Thousands of people have died in the violence that has gripped C.A.R. since the Seleka seized power in March 2013. The group relinquished power last year in the face of a violent backlash by the anti-balaka but still controls the northeastern half of the landlocked country.

Former colonial power France, which deployed some 2,000 troops to C.A.R. to stem Christian-Muslim violence, also rejected the agreement. The French Foreign Ministry said the deal was an attempt to undermine a mediation process led by the transitional government, which is expected to lead to a forum in Bangui in March.

“That initiative has France’s backing,” the ministry said in a statement, adding that it was important to ensure the reconciliation process ended impunity and that all U.N. members should enforce sanctions adopted by the U.N. Security Council.

Despite the presence of the French forces and a U.N. peackeeping mission, the interim government has been unable to assert its authority ahead of elections due later this year.

French military spokesman Colonel Gilles Jaron said that while the situation in C.AR. was generally stable, there were tensions in the east, due largely to a widening split between a faction of Seleka who wished to enter the peace process and those who preferred to continue fighting.

He said a majority of Seleka fighters would be represented at the upcoming talks in Bangui.