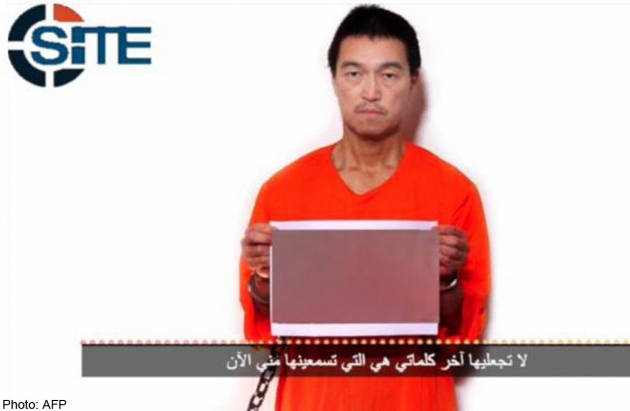 Japan’s Prime Minister Shinzo Abe has said the “credibility” of a video announcing the execution of a Japanese hostage by the Islamic State of Iraq and the Levant (ISIL) was “high”.

“We have been looking into its authenticity, but unfortunately, at the moment, we cannot help saying its credibility is high,” he said on the public network NHK on Sunday.

“Considering the unbearable pain and sorrow that his family must be feeling, I am speechless.”

“Such act of terrorism is outrageous and impermissible, it causes me nothing but strong indignation,” he added. “I condemn it strongly and resolutely.”

The government will continue analysing the images to fully confirm the authenticity of the video, Abe said.

The nearly three-minute recording, posted online on Saturday, shows a still image of Kenji Goto, the freelance Japanese journalist who was abducted while reporting on Syria’s civil war last year, holding an apparent photograph of Haruna Yukawa’s slain body, with an audio recording in which Goto spoke of the ISIL group’s demand for a prisoner exchange to guarantee his release.

It was not posted on any of the group’s official channels and it does not bear their black and white flag. The purported execution of Yukawa is also not shown.

The Japanese government said on Saturday that the recording appeared to show that captive Haruna Yukawa has been killed. Yukawa, a private military contractor, was kidnapped in Syria last August.

Abe told reporters as he arrived at his Tokyo office early on Sunday morning that Japan “strongly demanded” the release of Goto.

The video surfaced after a deadline for Japan to pay the ISIL group a $200m ransom passed on Friday.

Al Jazeera’s Harry Fawcett, reporting from Tokyo, said the Japanese government was trying to verify the authenticity of the video.

“There are some [people on social media] who are doubting the veracity of the pictures,” Fawcett said.

The group has reportedly now demanded that one of its members be released from custody in Jordan as a swap for the release of Goto.

Though the video has not been officially verified, US President Barack Obama issued a statement on Saturday night, saying the “United States strongly condemns the brutal murder of Japanese citizen Haruna Yukawa by the terrorist group.”

British Prime Minister David Cameron also condemned ISIL, saying in a statement that the “reported brutal murder … and further threats made by ISIL are yet another reminder of the murderous barbarity of these terrorists”.

US National Security Council deputy spokesman Patrick Ventrell said in a statement on Saturday that the US intelligence community was also working to confirm the video’s authenticity.

On Tuesday, the ISIL group released a video threatening to kill Yukawa, 42, and Goto, 47, unless they received $200m within 72 hours, directly demanding the ransom from Abe.

The ransom video, identified as being made by ISIL’s Al-Furqan media arm, was released shortly after Abe had pledged $200m in aid to countries to fight against ISIL.