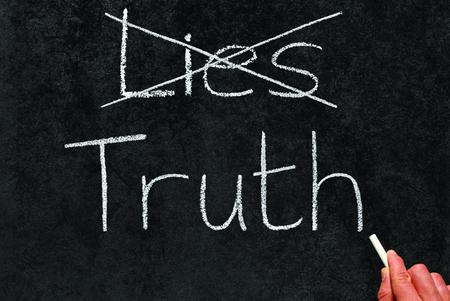 Anything that is untrue and deliberately intended to mislead another person is a lie. A lie, therefore, can be anything verbal or written that is baseless, unreal, incorrect, inaccurate or overstated.

Lying, called ‘the root cause of all crimes’, is one of the most common wrongful acts that we commit in our daily life. It has become, for some, a sort of habit. It seems, at times, like people have literally forgotten to avoid it.

Sometimes, a husband lies his wife about his coming home late from office. Another time, wife lies to her husband about the meals, or about not taking care of kids etc. Other times we lie for no good reason like, when we say we are ill when we are just lazy and don’t want to go to work. Kids lie to their parents or teachers regarding their home-works or for not attending school. Employees lie to their boss, for late coming, or for incomplete work.

Another form of falsehood is related to Allah and the Holy Prophet (pbuh). Clearly this is the worst kind of falsehood from which we seek Allah’s protection. The examples are many.

In short, there are many activities and doings about which people tell lies to avoid the unpleasant or to get some quick benefit.  In doing so, it is easy to forget about sin.  Sometimes, some people even commit it without at all considering what they are actually saying.

Indeed, lying is one of the worst of all sins, yet it is easy to fall into. By telling lie, one can misguide others and just by a single wrong word, people can be misguided easily. Often due to lying, innocent people are sent to the gallows and their families destroyed.

In contrast, the truth is usually ‘bitter’; we can say sometimes it is ‘painful’. It is not that we have to be rude; rather we have to be honest. One lie leads to the next while the truth never changes, it always remains the same.

All religions and systems of ethics warn against lying. Also, man’s innate common sense also agrees that it is wrong, yet we commit. A person who is habitual in telling lies looses his trustworthiness.

‘Only they forge the lie who do not believe in Allah’s communications, and these are the liars’. (16:105)

Speaking the truth with respect is the right thing to do. It makes us worthy of people’s respect. It is the foundation of any worthwhile relationship. And in this age of hype it sets us and our message apart.

Therefore, we should always speak the truth even when doing so is difficult or inconvenient. It is a mark of being an upright person and a pious human being.

May we always be blessed to speak the truth since the ultimate consequence is always good!