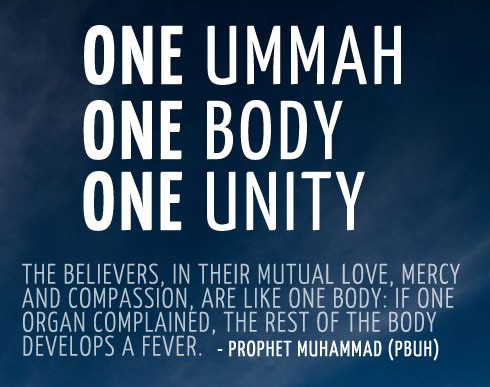 Globally the Muslim Ummah is in a crisis. From Australia in the south to Canada in the north, from China in east to USA in the west we find Islamophobia raising its venomous head. The “War on Terror”, persecution, oppression, discrimination, etc against innocent and peace loving Muslims has become the order of the day. The raining of missiles on families in Palestine-Gaza , the merciless killing of innocent civilians in Syria, ethnic cleansing in Myanmar, torture and rape in Afghanistan and Iraq,the banning of niqaab in France, war in Somalia, Chechnya etc. The list is extensive.

As Muslims we should not turn a blind eye and be apathetic to the sufferings of millions of our fellow brothers and sisters globally. We should not only feel the pain in our hearts, but should constructively engage ourselves in physically assisting the Ummah with whatever means we have at our disposal.

The Messenger of Allah (peace be upon him) has emphatically stated that “No one of you becomes a true believer until he likes for his brother what he likes for himself”.(Hadith-Bukhari & Muslims)

We are ONE UMMAH, if the finger feels a pain the whole body feels the pain. It is our duty to share the pain, responsibilities, burdens and needs of our fellow brothers and sisters.  The Messenger of Allah (peace be upon him) said: “The example of Muslims in their mutual love, mercy and sympathy is like that of a body; if one of the organs is afflicted, the whole body responds with sleeplessness and fever.”(Hadith-Muslim)

Our ancestors in Islam, the esteemed Companions of Muhammad Salallaho alaihe wassallam demonstrated practically what was meant by true love for our brothers(sisters) in Islam. Hadhrat Abu-Jahm-bin-Huzaifah (Radhiyallaho anho) narrates:”During the battle of Yarmuk, I went out in search of my cousin, who was in the forefront of the fight. I also took some water with me for him. I found him in the very thick of battle in the last throes of death. I advanced to help him with the little water I had. But, soon, another sorely wounded soldier beside him gave a groan, and my cousin averted his face, and beckoned me to take the water to that person first. I went to this other person with the water. He turned out to be Hishaam bin Abil Aas (Radhiyallaho anho). But I had hardly reached him, when there was heard the groan of yet another person lying not very far off. Hisham (Radhiyallaho anho) too motioned me in his direction. Alas, before I could approach him, he had breathed his last. I made all haste back to Hishaam and found him dead as well. Thereupon, I hurried as fast as I could to my cousin, and, lo! in the meantime he had also joined the other two.”

Many an incident of such self-denial and heroic sacrifice is recorded in the books of Hadith. This is the last word in self-sacrifice, that each dying person should forego slaking his own thirst in favour of his other needy brother. May Allah bless their souls with His choicest favours for their sacrifice for others even at the time of death, when a person has seldom the sense to make a choice.

WHAT CAN WE DO TO HELP THE UMMAH?

Every bit of help counts! No single bit of assistance no matter how minute or what form it may take is insignificant. There was a King who had a festival. He asked everyone to bring a jug of milk that evening and pour it into a huge container so everyone, even the poor, could enjoy it the next day.  A certain man thought that if he poured a jug of water instead of milk into the container it won’t be noticed in the dark and he really thought that it won’t make a significant difference. So he poured a jug of water. When he came the next day he surprisingly witnessed that the huge container was almost full of water. It was quite clear that in his community everyone thought the same.

All we need as an Ummah is to play our “small” part. If we each do our “little” then combined it will Insha Allah be a lot! The “little” we do will Insha Allah go a long way. Here are some practical ways we can show our genuine love for the Allah Ta’ala, Muhammad (peace be upon him) and our fellow Muslims who are suffering.

1.      DU’AA(SUPPLICATION): Indeed no condition or situation can ever improve without the Help of Allah. The Messenger of Allah (peace be upon him) is reported to have said that; “Dua is a weapon of a believer.” (Hadith-Al Hakim). Du’aa should be made individually and collectively. Do it at home with the family and also in the Masjid. Children should be encouraged to also join in. The Messenger of Allah (blessings and peace be upon him) encouraged the Ummah to read Qunoot-e-Naazilah supplication (dua) at the time of distress and calamity. (Hadith- Abu Dawood). Imaams of Masjids should also read the Qunoot-e-Naazilah in the congregational prayers of Fajr and to ask the Almighty’s Guidance and intervention to save and protect the Ummah. Also keep fast and perform optional prayer.

2.      CONTRIBUTE:  We should generously contribute in whatever way possible. The Messenger of Allah Ta’ala (peace be upon) said that: “Charity (Sadaqah) does not decrease the wealth” (Hadith-Muslim) and he (pbuh) also said that daily two angels offer Du’aa, “O Allah, compensate those who spend, and bring ruin to those who withhold”. (Hadith- Bukhari). Encourage our children to contribute from their own savings even if it just a few cents. In this way worry and concern for the Ummah will be inculcated in them. Search for credible Islamic relief organisations operating in areas where our funds are most needed. Be wary of bogus collectors.  Be pro-active in raising funds. The Messenger of Allah Ta’ala (peace be upon) is reported to have said: “Indeed, Allah blesses certain people with special bounties for the benefit of other people. As long as they benefit others, Allah continues His bounties upon them but when they stop benefitting others, Allah takes these bounties back from them and transfers to others.” (Hadith-Tabarani)

3.      JOIN: We need to be as much as possible physically involved. The best is to be at our Muslim brothers and sisters’ side when they really need us the most. Distance, race, colour, social status etc should never be a barrier in assisting the Ummah. Join and engage ourselves in those activities that will support and bring genuine relief to the distressed Ummah. Be cautious that our activities are always in compliance with the Laws of Allah Ta’ala.

4.      EDUCATE: Be pro-active and educate yourself. Be knowledgeable on the subject. Our families and communities should be educated about the plight of the Ummah. Masjids, media, schools etc should be used to for this purpose. Keep a vigilant eye on the news outlets; magazines etc. and respond timeously to their bias comments and views. Forward pertinent and relevant articles you come across to the International and local media outlets.Using the world atlas or internet, show our children where the affected part of the Ummah is. Do not support those that directly or indirectly assist the oppression and persecution of the Muslim Ummah.

5.      HOPE: Always be hopeful and never be despondent. Allah Ta’ala will help even though it may be after some time.  Often the media tries to create hopelessness and many Muslims are left in despair. It may seem that the death of millions of innocents is now inevitable, but we must continue to strive our utmost to defend them and to spread the truth about these immoral actions perpetrated against innocent Muslims. Above all, we must remember that Allah Most High has control over all things and can provide help in ways we do not even understand. Not even the ‘greatest’ superpower can overpower Him! No falsehood is to remain forever. No oppression is to remain forever. After hardship comes ease. Insha Allah the difficulty of the Muslim nation will come to end and tomorrow will be definitely better than today. We should have HOPE in the ALL encompassing MERCY and HELP of Allah Most High under all circumstances, whether it be in victory, defeat, happiness or sadness.

The Messenger of Allah(peace be upon him) has said that whosoever helps a Muslim at the time of loss of honour and humility; will receive Help from Allah when he is in need of help.(Hadith-Abu Dawood)

Most importantly remember the Muslim Ummah is ONE! Let us not forget that behind every dark cloud there is a silver lining.