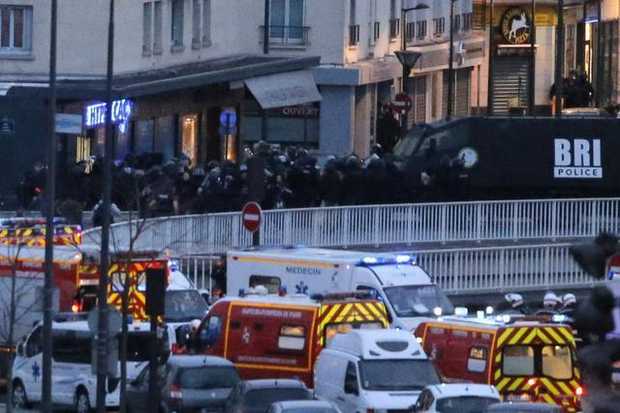 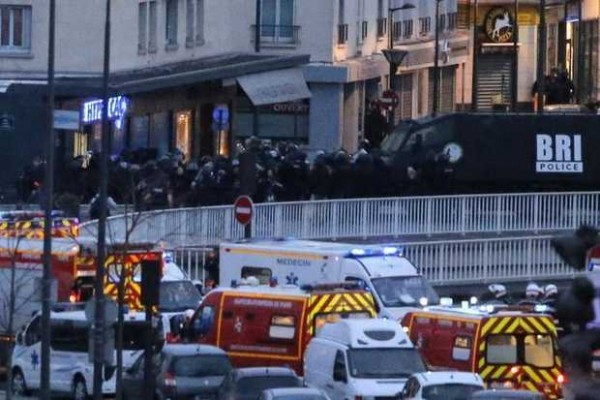 PARIS— French authorities say the two armed suspects in this week’s Charlie Hebdo attack have been killed and their hostage freed during a police raid northeast of Paris. A separate raid in the capital killed another gunman holding multiple hostages at a kosher supermarket in the capital, but police said three hostages died in that operation.

Explosions and gunfire sounded as police moved in Friday afternoon, almost simultaneously, on the supermarket in Paris and on the industrial town of Dammartin-en-Goele, near Charles DeGaulle international airport. Brothers Cherif and Said Kouachi, named as the principal suspects in Wednesday’s bloody attack on the satirical magazine in Paris, came out of hiding in a warehouse and began firing as police moved in. They were cut down in return gunfire from a large force of police on the scene.

In the Paris shootout, security forces stormed the supermarket near the Porte de Vincennes neighborhood. They killed gunman Amedy Coulibaly, who had stormed into the market hours earlier and held customers and staff hostage. Authorities said that there had been “at least five” hostages and that three were killed, but it was not clear who killed them and when.

French President Francois Hollande called Friday’s violence a “horrible anti-Semitic attack.” He said France will not give in to any pressure or fears.

Hollande thanked the security personnel who ended the standoffs and neutralized the terrorists. He urged the French people to show vigilance and unity, which he called the country’s best weapon to fight against terrorism, racism and anti-Semitism.

He congratulated French law enforcement for ending the standoffs and said the spirit of solidarity “will endure forever, long after the scourge of terrorism has vanished from this world.”

French Interior Minister Bernard Cazeneuve thanked police for their efforts to end the standoffs. He did not offer specifics about the police raids, but he vowed that France will remain mobilized to ensure security.

A police official said the gunman in the supermarket attack, 32-year-old Coulabaly, is believed to be the same man who shot and killed a policewoman south of Paris on Thursday.

Authorities also are seeking a woman described as his accomplice, Hayet Boumeddiene. Initial reports from teh scene said she may have escaped in the confusion as other shoppers fled the store.

Police sources have linked Coulibaly to the Kouachi brothers, who were shown in a video of the Charlie Hebdo attack carrying high-powered weapons. They killed a dozen people – 10 members of the magazine’s staff and two policemen – in what the French news agency AFP described as “the bloodiest attack on French soil in half a century.”

The brothers and Coulibaly apparently knew each other through a common network to recruit jihadists.

Before gunshots and explosions erupted Friday afternoon in Dammartin-en-Goele, French security forces said they were in contact with the Kouachis. The brothers reportedly told police negotiators they were prepared to die as martyrs.

A third suspect, 18-year-old Hamyd Mourad, surrendered to police on Wednesday. His relationship to the Kouachis remains unclear.

Before Friday’s events, nine people had been taken into custody for questioning about their possible knowledge of the Charlie Hebdo attack. The satirical magazine, known for making fun of all religions, including Islam, has announced it will resume publication Wednesday, despite the loss of its director and leading cartoonists.

More than 88,000 police and security forces had been searching for the brothers.

In Thursday’s shooting, a policewoman was gunned down while responding to a traffic accident in the Montrouge area just south of the capital.

As a precaution, police on Friday also ordered the closing of all shops in central Paris’ famed Jewish Marais neighborhood. It’s about a kilometer from the Charlie Hedbo offices and farther from the now-resolved hostage situations. As The Associated Press reported, the district’s Rosiers Street usually teems with tourists and with French Jews in the hours before the Sabbath.

Both Kouachi brothers had links with radical Islam. Said, 34, received terrorist training in Yemen in 2011, The New York Times reported. Cherif, 32, was a former rapper who served prison time for his involvement in a Paris terrorist cell.

Hundreds of French nationals have headed to Iraq and Syria to join jihadist fighters.

According to The Associated Press, she said Hollande had “assured me that a profound debate on the rise of Islamic fundamentalism in our country will take place and that all the political parties will be listened to” regarding steps “to ensure the security of the country and our people.”

The brothers appear to have been radicalized for some time, unlike other recent French jihadists, according to Franck Fregosi, a political scientist and expert on Islam.

Fregosi said the brothers’ radicalization reflects a new trend, a sort of family event in which brothers and sisters may jointly turn to radical Islam.

Also  Friday, the French newspaper Liberation made room for the surviving Charlie Hebdo journalists to prepare the satirical weekly’s next edition. The newspaper plans to print 1 million copies, 30 times its regular run.

“Since a long time, Charlie Hebdo and Liberation are seen, are like brothers. It’s like a fraternity,” Liberation editor Pierre Fraidenraich said. His paper had welcomed Charlie Hebdo staff after the newspaper was fire-bombed in 2011.

Fraidenraich said his newspaper would host the Charlie Hebdo team  for “all the time they want.”

Meanwhile, mourning continues for those killed at the satirical magazine known for making fun of all religions, including Islam – and for two policemen who were among the dead.

Parisians stood in silence in a chilly rain Thursday, holding up pens and pencils as a sign of the right to free speech. The lights of the Eiffel Tower dimmed Thursday night to honor the victims.

The U.N. Security Council held a moment of silence before Thursday’s meeting.

President Barack Obama signed a book of condolence at the French embassy in Washington. He called the killings cowardly and evil.

Some information for this report was provided by The Associated Press, AFP and Reuters. VOA’s Peter Vaselopulos contributed to this report from near Dammartin-en-Goële.