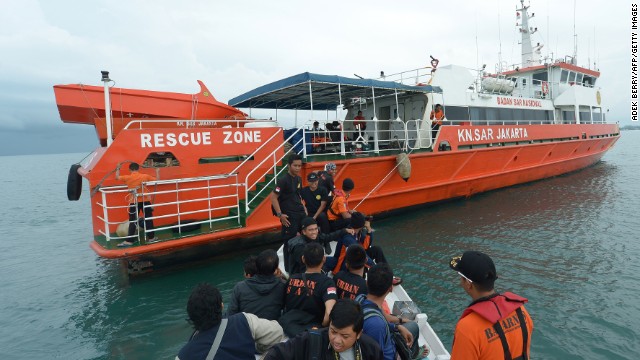 Indonesian officials have recovered at least 40 bodies from the sea near the wreckage of an AirAsia passenger jet that crashed during a storm Sunday.

Local television Tuesday showed rescue helicopters pulling bodies from the Java Sea, about 160 kilometers off the coast of Borneo island.

Families of some of the 162 people on board AirAsia flight 8501 burst into tears and hugged one another after seeing the images of the floating bodies, which were not wearing life jackets, and wreckage.

No survivors have been found

By nightfall, rescuers had recovered only a quarter of those on board the jet. None of the passengers or crew have been found alive.

The bodies were located shortly after the discovery of wreckage, including what appeared to be an orange life jacket, luggage, and a red and white emergency door.

Indonesian officials have also spotted a “shadow” under the surface of the water that is believed to be the main body of the plane, about 160 kilometers southwest of Borneo island.

The Airbus A320-200 disappeared Sunday, about halfway through what was supposed to be a brief, two-hour flight from the Indonesian city of Surabaya to Singapore.

Tony Fernades, the CEO and founder of AirAsia, said via Twitter his “heart is filled with sadness for all the families involved,” in the tragedy, and added that “words cannot express how sorry I am.”

At least 30 ships, 15 aircraft and seven helicopters are looking for the plane in the Java Sea between Borneo and Sumatra islands.

The search effort will be bolstered Tuesday with the arrival of a U.S. Navy warship. The USS Sampson, which was already on deployment in the area, is equipped with sonar devices that can scan underwater.

The passengers include 149 Indonesians, three South Koreans, and one each from Britain, Malaysia, and Singapore. The crew included six Indonesians and a French co-pilot.

The twin-engine plane gave no distress signals before disappearing, though pilots had asked permission to fly at a higher altitude to avoid a storm cloud.

Indonesian officials say that permission was not granted because other planes were in the area. The jet was instead approved to fly around the storm.

The plane was operated by the Indonesian affiliate of AirAsia, a Malaysian-based low-cost airline that previously had a spotless safety record.

The disappearance comes at the end of a disastrous year for plane travel in Southeast Asia.

In March, Malaysia Airlines Flight 370 disappeared while en route from Kuala Lumpur to Beijing. The plane, which was carrying 239 people, is believed to have crashed into the Indian Ocean off the western coast of Australia, though no trace of it has been found.

Two months later, in July, Malaysia Airlines Flight 17 crashed in eastern Ukraine, killing all 298 people on board. Western officials believe that plane was shot down by Moscow-backed Ukrainian rebels.