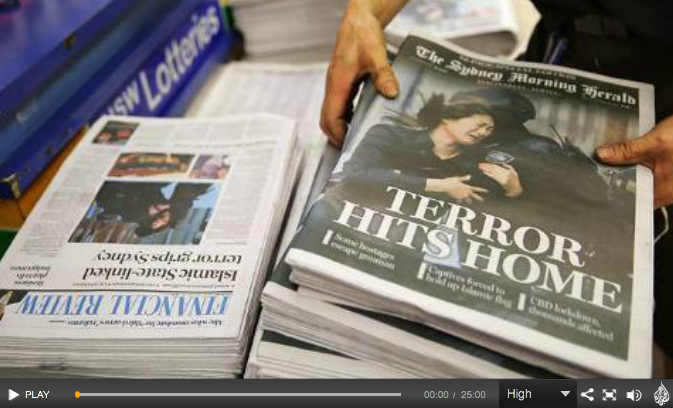 When news of the hostage taking in Sydney broke on December 15, 2014, reporters trying to cover the story were scrambling for scarce and valuable commodities: the facts.

Their coverage echoed what had happened in the Canadian capital, Ottawa, just a few weeks before. Both stories were about one armed man, acting alone – as opposed to as part of a wider conspiracy – and both stories were accompanied by news coverage that seemed disproportionate, both in editorial tone and in terms of volume. It was template journalism and the media were peddling the Islamic terror narrative.

Talking us through the Sydney siege coverage this week are: Chris Graham, New Matilda; Ahmed Kilani, Muslim Village; Murtaza Hussain, The Intercept; and Andrew Mitrovica, a journalist and commentator.

Another big media story on our radar this week: After raids on the numerous media outlets allied with US-based Muslim cleric Fetullah Gülen, on December 19, the Turkish authorities issued an arrest warrant for Gülen himself. Once Recep Tayyip Erdogan’s close ally, now Gülen is considered the president’s most powerful enemy. At least two dozen people were arrested in the raids, including the editor-in-chief of Turkey’s largest daily paper Zaman – who has since been released – and the chairman of Samanyolu TV. They stand accused of being part of a ‘parallel state’ and fabricating evidence.

Our feature this week: In the aftermath of the phone hacking scandal that shook British journalism, tabloid editors accused of systematically hacking the phones of newsmakers, used the ‘one rogue reporter’ defence. Rich Peppiatt, a former tabloid journalist has entitled his film One Rogue Reporter and in it he uses the tricks of the trade against the tabloids themselves. Richard Gizbert sits down with Peppiatt to discuss yellow journalism in the UK.

Finally, our closing video comes from London. Photographer Nicholas Buer wanted to see how the sky over the city would look without light pollution. So he created, digitally, a blackout and put together a starry, haunting time lapse film called Blackout City.