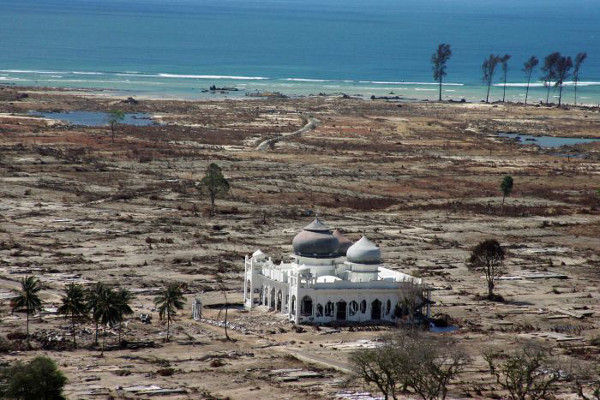 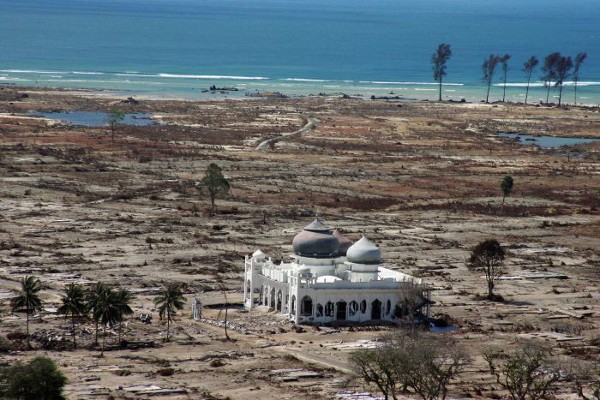 By: Joanna McCarthy, with Andie Noonan and Ian Burrows

In the days that followed the devastating 2004 tsunami, the mosque provided shelter for the displaced and refuge for those who wanted to pray.

A slight tilt and some cracks in the minaret were the only evidence of what it endured when a massive 9.1-magnitude quake off the coast of Aceh triggered a tsunami in the Indian Ocean.

Aloysius Suratin, deputy country director for Oxfam in Indonesia, said, after a decade, the area had sprung back to life.

“I must say now the situation is already back to normal. They worked hard to rebuild,” he said, but added that people were deeply scarred.

“The victims of the disaster, they lost their family members, they lost all their goods and their source of livelihood.

“But the worst thing – the difficult thing – is to accept that you don’t have your family members. This is the highest loss faced by the victims of the disaster.”

Locals often attribute the fact that the Baiturrahman Mosque survived, along with many other mosques in the province, to divine intervention. 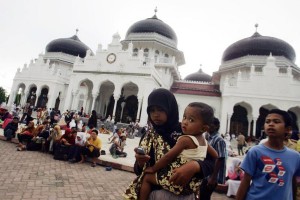 The mosque was built in the late 19th century by Dutch colonisers after they destroyed the original mosque in 1873.

It was spurned by worshippers for its colonial origins, but now it is the pride of Aceh.

Ten years ago, cleric Din Syamsuddin stood in the mosque in the devastating days after the tsunami and told worshippers that Aceh must rebuild.

“We are still very sad now, but according to our belief we must restore prosperity and work for a better future,” he said.

In the years that followed, Aceh’s decades-long civil war came to an end and authorities began the slow and difficult work of reconstruction.

Today, Baiturrahman Mosque stands as a testament to Aceh’s survival.

“They say the mosque that is still there, for them it is like a miracle.

“This is the first word if you communicate with them about [it].”

He said the tragedy had shaped the area.

“The tsunami has really affected the way [people in] Aceh face life,” he said.

“They realise the limitedness of human beings … all you have in life can disappear in a second.

“They are the witness of this traumatic situation … so people have a strong bond with each other with this collective memory.”

Despite rebuilding efforts, concern has been raised about the effectiveness of reconstruction.

John McCarthy, associate professor at the Crawford School of Public Policy at Australian National University, said some people living in Aceh at the moment are running out of food.

“We found above 50 per cent of people were still suffering a hunger season,” he said.

He said this occured in the area where, on average, there had been about 10 livelihood projects per village in the post-tsunami period.

“The donors and the NGO community had spent about $7.5 billion on the post-tsunami intervention,” he said.

“To have such a high-profile and one of the biggest development interventions in developing countries ever, how were they able to achieve, from our perspective, such poor livelihood outcomes?

“We were quite surprised by that really.”

Associate Professor McCarthy said many of the aid projects had short timelines which had contributed to the problem.

“They just had to spend as quickly as they could. They were all competing with each other,” he said.

“I think these projects could have achieved a lot more if they weren’t in such a rush, if they wanted to develop longer-term partnerships, and try and think more carefully through what might be done to alleviate this vulnerability.”

“The tsunami when the wave struck; the tsunami that followed, which was the tsunami of aid money and aid agencies; and then the third tsunami was when they all poured out,” he said.

“The Acehnese don’t blame the aid agencies but they do see it as a lost opportunity.

“When I was there 10 years earlier [before the tsunami], things were way, way in front of where they are now. There is no reason why these villages along the west coast of Aceh should be as food insecure as they are.”

In response to criticisms, Mr Suratin said he believed life in the area had improved.