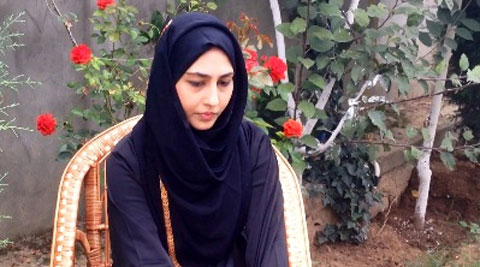 She used to spend her days getting dolled up with the best of branded, glamorous outfits and makeup. Shopping in the expensive malls was her biggest passion. For this shopaholic (as she would call herself), Dubai was the most preferred shopping destination. But that was till 2012.

Born and brought up in Mumbai, house to India’s film industry, Murcyleen Peerzada, 23, worked as an assistant director for ‘Ek Tha Tiger’ while still in the last year of her college. Her father, Feroz Peerzada, a wealthy Kashmiri businessman who had known Yash Chopra for three decades, introduced her to the famous film director.

And her aim was to make it big at the silver screen.

But her life is a complete reverse to what it used to be.

Murcyleen, still based in Mumbai, has donated all her expensive outfits, branded accessories, and makeup to the orphanages to lead a simple and modest life. The dramatic turn over came with the death of the film director who was known for making romantic movies.

“I was very close to Yash Ji (Yash Chopra). His death shook me entirely, and I started thinking about life and the higher power that controls everything. I went into depression for three or four months. I used to do nothing,” Murcyleen told Kashmir Reader on phone from Mumbai.

“While looking for an answer on internet, I came across the videos of world renowned Islamic speakers like Nouman Ali Khan and Yasmin Mogahed,” she said.

“When I heard Khan for the first time, I was like ‘Oh My God! He is talking to me only’. I was a Muslim just by name, not by practice. But the knowledge I attained from Khan and Mogahed was awakening. That was the point of life where I started praying twice a day. And I used to ask Allah to guide me and show me the right path,” she said.

“I was 19 when I started working for Yash Raj Films (YRF) as an assistant director for ‘Ek Tha Tiger’. I took it as a stepping stone as my goal was to become an actor,” she said about her journey from Bollywood to Islam.

In her next film for YRF, ‘Shudh Desi Romance’, Murcyleen was offered a screen-test.

“The director of the movie is known to launch new faces, so he offered me a screen test. When I faced the camera, I don’t know what happened to me and I suddenly felt very exposed and vulnerable. I felt like an object with all eyes on me. I couldn’t take it, and I walked out saying ‘I don’t want to do this ever’,” she said.

“Yash Chopra was like a grandfather to me. When I told him about my decision, we talked about it for more than an hour. Then I decided that I will do costume, and Yash Ji recommended me to Manish Malhotra,” she said.

Murcyleen hadn’t joined Malhotra when the turning point in her life (Chopra’s death) came in her life October 2012.

While browsing internet for Islamic knowledge, she, while cleaning her house, found a pile of files with Allah written on the topmost one.

“It was transcript of a video of Zakir Naik on the topic ‘Women in Islam’. It instantly gripped me as if I found the purpose of my life. It was so enlightening that I read the whole bunch by the evening,” she said.
That very evening, she decided the future course of her life and got herself enrolled in IRF to learn about Islam under the guidance of Farah Naik, wife of Zakir Naik.

“People find Islam very strict, but I found it more liberal. During my initial months at IRF, I did not cover my head, and nobody would force me to do it. In fact, my colleagues would think that I was a revert to Islam.

“It was only after I myself understood the importance of hijab for a woman that I started covering my head. I am glad about my transformation and I want more and more people to turn towards Allah because that is the only truth,” she said.

Murcyleen is currently doing an advanced course in order to become an IRF orator. Besides, she is doing her Masters in Islamic Studies from the Islamic Online University in Qatar through correspondence. She intends to organize more Islamic conferences for women in Kashmir in near future.

“I found that Kashmiri women are more attracted to Westernisation. They are where I was some years ago. I know how exactly they feel. My generation cannot be inspired with angry speeches. Therefore, I want to connect with youth through more peace conferences where scholars talk at length about various things in a subtle way,” she added.