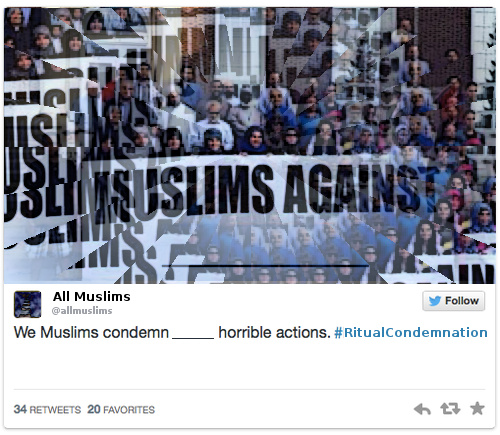 There’s a certain ritual that each and every one of the world’s billion-plus Muslims, especially those living in Western countries, is expected to go through immediately following any incident of violence involving a Muslim perpetrator. It’s a ritual that is continuing now with the Sydney hostage crisis, in which a deranged self-styled sheikh named Man Haron Monis took several people hostage in a downtown café.

Here is what Muslims and Muslim organizations are expected to say: “As a Muslim, I condemn this attack and terrorism in any form.”

This expectation we place on Muslims, to be absolutely clear, is Islamophobic and bigoted. The denunciation is a form of apology: an apology for Islam and for Muslims. The implication is that every Muslim is under suspicion of being sympathetic to terrorism unless he or she explicitly says otherwise. The implication is also that any crime committed by a Muslim is the responsibility of all Muslims simply by virtue of their shared religion. This sort of thinking blaming an entire group for the actions of a few individuals, assuming the worst about a person just because of their identity is the very definition of bigotry.

It is time for that ritual to end: non-Muslims in all countries, and today especially those in Australia, should finally take on the correct assumption that Muslims hate terrorism just as much as they do, and cease expecting Muslims to prove their innocence just because of their faith.

Bigoted assumptions are the only plausible reason for this ritual to exist, which means that maintaining the ritual is maintaining bigotry. Otherwise, we wouldn’t expect Muslims to condemn Haron Monis who is clearly a crazy person who has no affiliations with formal religious groups any more than we would expect Christians to condemn Timothy McVeigh. Similarly, if someone blames all Jews for the act of, say, extremist Israeli settlers in the West Bank, we immediately and correctly reject that position as prejudiced. We understand that such an accusation is hateful and wrong but not when it is applied to Muslims.

This is, quite literally, a different set of standards that we apply only to Muslims. Hend Amry, who is Libyan-American, brilliantly satirized this expectation with this tweet, highlighting the arbitrary expectations about what Muslims are and are not expected to condemn:

This ritual began shortly after September 2001. American Muslims, as well as Muslims in other Western countries, feared that they could be victims to a public backlash against people of their religion. President George W. Bush feared this as well and gave a speech imploring Americans to embrace Muslim-Americans as fellow citizens. But while the short-term need to guard against a backlash was real, that moment has passed, and the ritual’s persistence is perpetuating Islamophobia rather than reducing it, by constantly reminding us of our assumption that Muslims are guilty until proven innocent.

The media has played a significant role in maintaining this ritual and thus the prejudiced ideas behind it. Yes, that includes openly Islamophobic cable news hosts like those in the US. But it also includes even well-intentioned media outlets and reporters who broadcast Muslims’ and Muslim organizations’ condemnation of acts of extremist violence, like the hostage crisis in Sydney.

There is no question that this coverage is explicitly and earnestly designed to combat Islamophobia and promote equal treatment of Muslims. No question. All the same, this coverage ends up cementing the ritual condemnation as a necessary act, and thus cementing as well the racist implications of that ritual. By treating it as news every time, the media is reminding its readers and viewers that Muslims are held to a different standard; it is implicitly if unintentionally reiterating the idea that they are guilty until proven innocent, that maybe there is something to the idea of collective Muslim responsibility for lone criminals who happen to share their religion.

Instead, we should treat the assumptions that compel this ritual that Muslims bear collective responsibility, that they are presumed terrorist-sympathizers until proven otherwise as flatly bigoted ideas with no place in our society. There is no legitimate reason for Muslim groups to need to condemn Haron Monis, nor is there any legitimate reason to treat those condemnations as news. So we should stop.

We should treat people like Haron Monis as what he is: a deranged lunatic. And we should treat Muslims as what they are: normal people who of course reject terrorism, rather than as a lesser form of humanity that is expected to reject violence every time it happens.