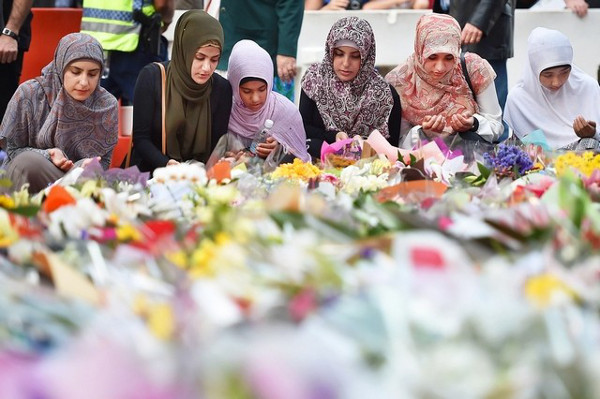 The depth of grief felt by Australians over the Lindt Cafe siege is shared by Muslims everywhere, writes Lydia Shelly.

I am a mother, an Australian and a Muslim and this tragedy has happened in my city, in my time.

When I tucked my darling four-year-old into bed on Monday night, I reflected on our safety and security, our sense of togetherness and love.

I didn’t know at that time one of the mothers who would have her life stolen would also have a child the same age.

My son is too young to understand what happened in Martin Place. When he starts school next year, he will play in the playground with boys sporting last names like Baker, Bernstein, Blucher and Bhutto. He will not care how they pray, or if they pray at all – as long as they let him play.

If only we could all relate to one another with the innocence of children. As a Muslim I am aware that any person who parades some link to my religion and commits any atrocity means my faith becomes fair game to be misunderstood.

This is a reality that other faiths are not burdened by. I feared that a disturbed individual with a lengthy criminal record would become the poster child of my faith.

We held our collective breath when the news broke of the siege, “perhaps it’s just an armed robbery”. Then the truly hideous situation began to unfold.

We were aware that the perpetrator may have been monitoring media and felt the weight of the lives of the hostages on our shoulders when we spoke. One. Wrong. Word… the potential consequences unthinkable.

We immediately offered any assistance we could give the police for resolving the nightmare peacefully. Many brothers said they wished that they could exchange themselves for the hostages.

We were tested, and we will continue to be tested. It is easy to give in to fear, mistrust and understandable anger. I called my former law lecturer yesterday, a quiet Presbyterian who himself missed entering the coffee shop by 10 minutes.

I couldn’t remember my way in the city, such was my distress.

I sobbed in the corner of the Queen Victoria Building until he was able to guide me.

I saw the very worst of human nature invade the coffee shop I regularly frequented after appearing in court around the corner for clients.

I also saw the very best of humanity: people using social media to push back against hate speech, and to embody the spirit of mateship.

The florist who sobbed with me, as I bought the white and yellow flowers I laid at the edge of the exclusion zone and the Cenotaph in Martin Place. The men and women who made their offers: #illridewithyou. The hugs, the collective tears and grief.

As a mother, an Australian and a Muslim, I joined hundreds to pay my respects for those whose lives were stolen, were injured – for the Australians forced to be unwilling actors in a nightmare come to life.

I went to Martin Place not to parade mock emotion, but the raw emotion that spilled out.

Australian Muslims have openly prayed and grieved for the lives lost, the trauma inflicted, the families ripped apart, the knowledge that we too, are helpless in changing the loss of life.

Our religious leaders, like every other Australian, only had the power to lay flowers on the concrete pavement in Martin Place.

I wept as a mother weeping for loss and for family left behind. I wept as an Australian whose history cannot be unwritten. I wept and prayed as a Muslim seeking God’s protection for our people and place.

A part of me feared that my grief would be questioned, and it soon was, by trolls online.

How perverted have we become when the sincerity of the grief of a fellow Australian is questioned.

By uniting in grief, we reaffirmed that tragedy can give birth to a resolve and a re-commitment to each other.

The Australian community has sent a strong message to the socially irresponsible shock jocks and the racists, as well as terrorists: You Will Never Win.

I pray that we are not tempted to use this tragedy to foster division and for it to serve as an eternal reminder that we are the one and the same.

There will be a day for debate, for the politics, for the dissection and analysis. But not today. Today is still a time of reflection.

A day of silence in the heart. Of prayer.

We hope that this tragedy will give us the resolve to remain united and committed to strengthening the bonds between us, long after the flowers in Martin Place are gone.