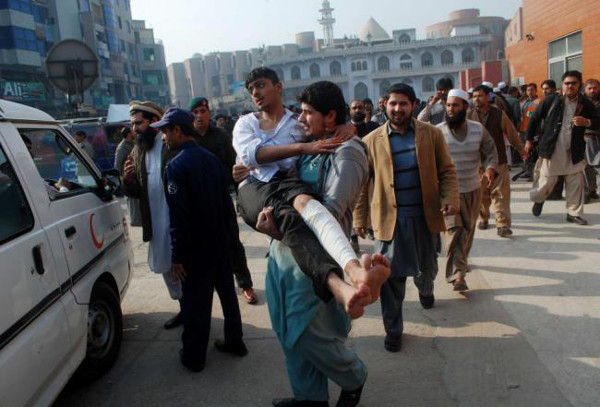 The siege of a school in Pakistan by Taliban militants has ended, leaving at least 141 people dead, most of them students.

Islamist militants wearing military uniforms and strapped with explosives attacked the military-run facility in the northwestern city of Peshawar. An army spokesman said security forces killed six of the attackers.

Military officials told reporters 132 of the dead were students about 12 to 16 years old. Nine school staff members are believed to have been killed as well.

The Pakistani Taliban claimed responsibility for the attack, saying it was an act of retaliation for Pakistan’s offensive targeting militants in the country’s northwestern tribal region, near the Afghan border.

Sharif, who arrived in Peshawar Tuesday, said the “government will not be deterred by this barbaric act” and vowed to continue military operations against the militants. He also declared a three-day national mourning period.

Speaking from London, U.S. Secretary of State John Kerry called the killings an act of terror that “shakes all people of conscience.”

“The images are absolutely gut-wrenching. Young children carried away in ambulances. A teacher burned alive in front of the students. A house of learning turned into a house of unspeakable horror,” Kerry said.

“Prime Minister Sharif said, ‘These are my children, it is my loss.’ Well, this morning, wherever you live, wherever you are, those are our children. And this is the world’s loss,” Kerry added.

The attackers took an unknown number of people hostage before Pakistan army commandos arrived at the scene and launched a rescue operation. Witnesses reported heavy gunfire from inside the school while ambulances ferried victims to hospitals.

Military spokesman Major General Asim Bajwa said the Taliban gunmen made no demands and started killing children as soon as they entered the building.

“They didn’t take any hostages initially and started firing in the hall,” Bajwa said. But the militants had brought rations for several days, he said in a Reuters report, implying that they may have intended to take students hostage.

Most of the deaths occurred at the beginning of the militants’ attack, military officials said.

Bajwa said on Twitter that explosive devices had been planted by the militants and were hampering clearance efforts.

Doctors said dozens of students are hospitalized, with some in critical condition. Authorities in Peshawar have appealed for blood donors.

VOA reporter Khan, who was at a Peshawar hospital, said, “A lot of people are donating blood.”

He said parents, rushing to the hospital where the bodies of many of the children were brought, were “weeping. They were beating themselves, there was sorrow.” He added that there were “some moving scenes” at the hospital throughout the day.

Ahsan Mukhtar, a student rescued by security forces, said, “As soon as the gunfire erupted, our teacher instructed everyone to move to a corner of the room for safety.”

Mukhtar added, “An hour later, when the intensity of the fire reduced, army soldiers arrived to rescue us, and on the way out, we saw bullet-ridden bodies of our schoolmates everywhere.”

Provincial Chief Minister Pervez Khattak said the gunmen were dressed in the uniform of the Frontier Corps, a paramilitary force.

Although the school enrolls some civilian students, many of its pupils are children of army officials, the Taliban’s intended target, Reuters and The New York Times reported.

Taliban spokesman Muhammad Umar Khorasani told Reuters, “We selected the army’s school for the attack because the government is targeting our families and females.

“We are doing this because we want them to feel the pain of how terrible it is when your loved ones are killed,” Khorasani said.

The Afghan border area, where Pakistan military operations are focused, has served as a major sanctuary and training ground for Pakistani and Afghan insurgents responsible for terrorist attacks on both sides of the mostly porous border.

Sharif vowed on Tuesday athat Pakistan’s operation in North Waziristan, called Zarb-e-Azb, which has killed hundreds of militants since its launch in June, will continue “until the terrorism is rooted out from our land.”

UN Secretary-General Ban Ki-moon strongly condemned the attack, calling it “an act of horror and rank cowardice to attack defenseless children while they learn.”

Pakistani children’s education advocate and Nobel laureate Malala Yousafzai, who was shot by the Taliban in a 2012 assassination attempt for her activism, responded to the attacks with resolve.

“I am heartbroken by this senseless and cold blooded act of terror in Peshawar. … Innocent children in their school have no place in horror such as this. … I, along with millions of others around the world, mourn these children, my brothers and sisters – but we will never be defeated,” Malala said.

U.S. President Barack Obama responded to the killings, saying that “by targeting students and teachers in this heinous attack, terrorists have once again shown their depravity.” Obama added that the U.S. will continue to support Pakistan’s efforts to combat terrorism and extremism.

The United Nations in Pakistan strongly condemned “the barbaric attack,” saying it is “appalled by this act of cruelty and brutality.”

Earlier Tuesday, U.S. Ambassador to Pakistan Richard Olson expressed solidarity with the country, saying “few have suffered more at the hands of terrorists and extremists than the people of Pakistan.”

British Prime Minister David Cameron tweeted on Tuesday: “The news from Pakistan is deeply shocking. It’s horrifying that children are being killed simply for going to school.”