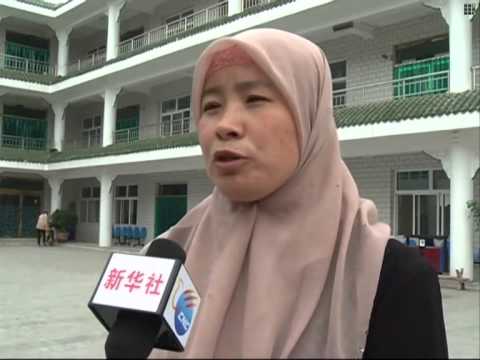 The number of female imams, known locally as ahong, acting as spiritual leaders and teachers for Muslim women, is rising in China, especially in the Ningxia Hui Autonomous Region. They have broken through taboos and barriers and won wide recognition among female believers. After learning doctrines and taking certification exam, more than 80 female imams in Ningxia have been licensed by the government. They lead Muslim women in prayer at mosques, teach them about the Koran and Islamic culture and offer religious services. They also mediate domestic disputes and enhance women’s awareness of their rights. Female imams are playing an increasingly essential role in improving gender equality, the quality of local women’s religious life and social harmony.

Every morning before the clock strikes five, 50-year-old Jin Meihua, a Muslim living in Wuzhong, Northwest China’s Ningxia Hui Autonomous Region, has already hauled herself out of bed and walked into her living room.

She turns on the lights, opens her Koran and starts to chant Islamic verses.

After preparing breakfast for her family, she trots to a mosque a few minutes’ walk away to lead a Koran study class.

There, dozens of Muslim women wait every morning for Jin to teach them about their religion. Over the course of a two-hour class, Jin guides them in chanting Koranic verses in Arabic and teaches them how to interpret the holy scripture. This has been Jin’s routine for 18 years, rain or shine.

Jin is a female imam or ahong, an Islamic spiritual leader. Female imams and female-only mosques are a distinctive feature of Chinese Islam, rarely, if ever seen elsewhere.

Currently, Ningxia has more than 80 female imams that have been licensed by the local government after passing official examinations. There are more than 3,760 registered mosques and 8,000 imams in the region according to a Xinhua News Agency report, and they provide services to the 2.32 million Muslims that live in Ningxia, one third of the region’s residents.

Jin’s hometown Wuzhong has one of the highest concentrations of ethnically Hui Muslims of any town in China, as they make up around 53 percent of its population.

“The appearance of female imams has met female Muslims’ demand for religious education and is beneficial for the stability and harmony of the Muslim community,” Ma Yuzhong, director of the Wuzhong Bureau of Ethnic and Religious Affairs, told the Global Times.

‘I wanted to know what I can do’

In some Muslim communities, as in many traditional societies, women have long had a lower social status than men. In Ningxia, most women marry young, depriving them of educational and employment opportunities.

This restriction of opportunities extends to their religious life. They are not allowed to pray in mosques with men.

The status of Muslim women angered Jin Meihua and she swore to change it. When she was 30 years old, she decided to become an imam.

Born in 1964, Jin was forced to drop out of education after she completed middle school due to her family’s poverty. She married at 18 and had three children before she turned 30.

She tried hard to be a responsible wife and mother, but felt empty.

“I felt so depressed. As a woman, I was told not to do this and not to do that. I could not work. I could not go to mosques. I wanted to know exactly what I can do and what I cannot do as a Muslim woman, and not just be told by other people,” Jin told the Global Times.

Like many other Muslim women, Jin started chanting Koranic verses when she was a child. But she had no idea what the scripture actually meant.

To understand the Koran she would have to learn Arabic, the language of the holy book. She begged an elderly imam for permission to study in the mosque. He agreed to teach her.

Her path to becoming an imam was not easy. Many people, including her husband, encouraged her to give up. She was told that women shouldn’t expose themselves in public.

Despite these pressures, and the difficulty of juggling her studies and running a household, she persevered.

“I thought about giving up. I wanted to hide deep under a mountain and cried out when I was struck by too much pressure, but my desire to help other women who lived in the same misery as me kept me going,” Jin said.

Jin took the imam examination organized by the local government in 1996, together with 400 men. She was one of only four women taking the exam. She can still remember bursting into tears when she found out that she had passed.

Now, Jin has been an imam for 18 years and has tutored hundreds of female students. Some of her students have followed in her footsteps and become imams themselves.

Ma Hongmei, 44, was one of Jin’s students. Ma is thankful that Jin educated her about Islam. “I was enriched by the teachings of the Koran, and got some clues about what makes one a good Muslim woman,” Ma, who became an imam in 2006, told the Global Times.

The main tasks of female imams are teaching Muslim women Islamic scriptures and instructing them how to live their lives within a religious framework, in addition to offering services such as weddings and funerals.

Imams, regardless of gender, are not paid by the government or by mosques. But the four female imams interviewed by the Global Times said that money is unimportant.

“Many women here are illiterate. If we help them to understand Koranic scriptures and religious doctrines, they can receive more respect in their families and neighborhoods,” Ma said.

Aside from acting as spiritual leaders, they also work as mediators in domestic conflicts within the Muslim community.

At 7 am on November 17, in a classroom in the Wunan Mosque, female imam Ma Guixia is guiding female students in Arabic Koranic chants.

Ma has over 40 students, mostly middle-aged and elderly women. Learning Arabic is a lengthy process and it takes a minimum of two years hard studying for students to fluently read the Koran.

Despite these challenges, the women find the classes to be beneficial. “It has taught us how to be good Muslim women. It also gives us a moral framework, so that we can behave well. It enriches us,” a 60-year-old woman surnamed Zhang who has been a student for over six years told the Global Times.

Aside from their religious role, female imams teach women about family planning, in accordance with government policies. In the classroom of the mosque, information about the local family-planning association hangs on the wall, and boxes of condoms, which are freely available to all, sit in a glass cabinet.

“Female imams have multiple tasks. They are obliged to teach religious knowledge, laws and social sciences, as well as ethnic and religious policies,” Zhang Yongzhong, deputy director of Wuzhong’s Bureau of Ethnic and Religious Affairs, told the Global Times.

Female imams are relatively well educated and usually enjoy a high degree of respect in their communities. Apart from acting as spiritual leaders for female believers, they also play an important social role.

They help to heal damaged relationships between mothers-in-law and daughters-in-law, offer shelter and support when women’s rights and interests are infringed, and teach women about what protections the law can offer them.

Wang Jinyu, imam of Wuzhong’s Ancient City Mosque, said that female imams have proved to be helpful in improving the quality of Hui women’s religious life.

“It used to be difficult for male imams to talk to female believers. Female imams can communicate better with Muslim women in ways that male imams can’t,” Wang told the Global Times.

However Wang pointed out that some conservative forces within the Hui community believe that the growth in the number of female imams is disrupting the natural order of the religion.

When female imams are attached to a men-only mosque, their status is lower than the male imams that lead such institutions. They have to routinely report their teaching syllabus to the male imams, Wang said.

Jin spoke of other forms of hostility to women imams. She said that some male imams showed contempt toward female imams when they address congregations during festivals.

This doesn’t faze her, however. “Women are born to shoulder more responsibility than men. I just wanted to teach other women to think and act independently, and help them break free of the negative influence of the conservative forces,” she said.

An example for others

As early as middle of the 17th century, religious schools for female Muslims had been set up around China.

However, as religious practices were banned during the Cultural Revolution (1966-76), these mosques were shut down. As public religious expression returned to China in the 1980s, female imams reappeared too.

“At that time, female imams only taught women how to pray and offered religious services at weddings and funerals. They didn’t give lessons on Arabic and Islamic culture, or the Koran,” Wang Jinyu told the Global Times.

Since the 1990s, and especially over the last 10 years, Muslim women’s roles in their community have broadened, meaning that female imams can begin to play an increasing role in religious life.

The presence of female imams in China has a significant demonstrative meaning for observers in other Muslim communities, especially those in which women are subject to repressive restrictions, said Xiong Bingqi, a noted cultural critic. But it’s not an easy road for other communities to follow, he added.

If women are better educated, they will know how to fight for, and protect, their rights and interests, he said.