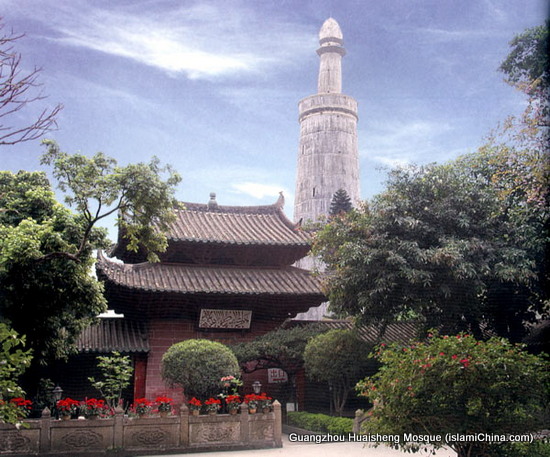 Whenever one goes to mosques around the world, one expects to see Islamic architectural designs containing minarets with geometrical sequences and a dash of Arabic calligraphy, whether it be in Andalusia Spain, Turkey, or even the outskirts of Africa.

However, in China this is not necessarily the case. We do see traces of Arabic calligraphy yet coupled with Chinese calligraphy a sight of two blended forms of art never thought to be seen.The blend between two cultures does not just stop there, but rather, it is further shown in the infrastructure, where instead of the typical Islamic geometrical minarets, there are tilted tiled roofs that are complementary to the Chinese traditional styled temples that are famously seen in martial arts movies.

The sight not only leaves Muslim tourists awe-struck but rather local non-Muslim inhabitants, as the blend of Arabic calligraphy and designs is something new to them where their land of familiarity becomes a land of ambiguity due to how there is no clear cut answer over which culture is more defined—the one of the Arabs or the Chinese.

The Merge of two artistic cultures

Islam was introduced to China during the 7th century, through some of the companions of the prophet. It was reported that Sa’ad ibn Aby Waqqas, one of the ptophet’s companions was one of the first Muslims to set foot in China in the 630s where he and other Muslims built a mosque in the outskirts of Guangzhou that is known as Huiasheng Mosque.

The mosque was established to commemorate Prophet Muhammad (peace be upon him). Thus, it was given the name, Huaisheng, which means, “remember the sage.”

The mosque has however also been known as the “light tower mosque,” due to the 1300-year old minaret, which was used as a beacon for boats on the Zhujiang river.

It is said that whenever the sailors would see the tower, they would know that they arrived at the “silk road,” which was a place for trade. The tower was also used as a call to prayer, and a means to check the weather conditions.

There have been reports that the mosque was rebuilt twice. The first time in 1350, during the Yuan dynasty, and, the second time in 1965 under the Qing dynasty, after being destroyed in a fire. The 1300 year old minaret was however left the same ever since first built, which has been used to symbolize how Islam was present in China long enough to be considered part of both Islamic and Chinese history.

Characteristics of the mosque

Huaisheng mosque’s Chinese architectural style that complements the Arabic-minaret-mosque-featured style is most specifically from the Tang dynasty. The blend of both Arabic culture and Chinese culture gives the mosque a unique taste, which makes it attractive for both tourists and local inhabitants.

The mosque’s gateway tower has the inscription of Chinese calligraphy that reads, “Religion that holds in great esteem the teachings brought from the Western region.” The Western region in this context means Saudi Arabia—the place where prophet Muhammad (peace be upon him) came from—due to the direction of Saudi Arabia being towards China’s West.

The roof of the corridors has Arabic calligraphy containing Qur’anic verses and the Kalimah, which further shows the merge of both Arabian and Chinese culture within the mosque’s infrastructure.

The red-brick gate mosque has 6 important components, one being the light tower, prayer hall, the ablution area, corridors, storehouse of Islamic scriptures, and the stone steles pavilion, which contains manuscripts and calligraphy. All of the corridors and infrastructure consists of a green-sculpted and titled roof, which is both customary and complementary to the Chinese architecture style.

The mosque was of great benefit for Muslims and sailors in the past that it brings the question of its use today.

There has been the rise of business from traders across the globe that go to Guangzhou via the seaport as it’s near the international financial hub Hong Kong. This has thus brought forth a lot of Muslims from different cultures that take the time to pray in the blessed mosque whenever taking business breaks during the day. Muslims of different races can also be seen in the differed array of cultured food stands that are placed outside.

The streets near the mosque and the mosque itself are usually crowded on Fridays because hundreds of Muslims pray Jumm’ah and later spend time doing Dhikir in circles or who share food from different stalls from across the streets.

This has interested the local non-Muslim inhabitants to be part of the integrated environment where some come to the mosque out of curiosity. Moreover, local Muslim inhabitants and Muslim business tourists usually go to the mosque to either pray or take a break during the day, while attempting to understand the foreign language from the West so that they both could understand the words of Allah and combine two cultured forms of art.

A form of practice that has been followed like generations before them, where some of the companions of the prophet (peace be upon him) came to trade, only to introduce to the local inhabitants an esteemed religion from the West that was to them once unknown.