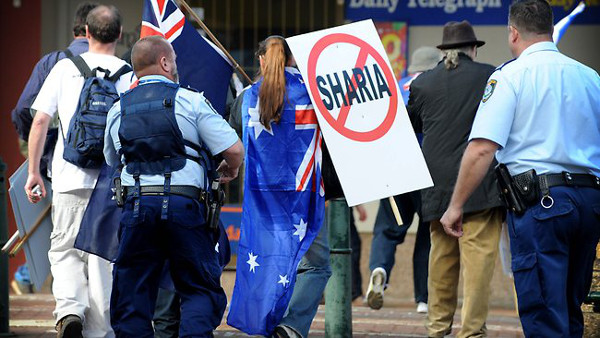 We may have a sense that there is fear and loathing in Australia because of the much vaunted “terror threat” stemming from the ISIS “death cult”.

But now the figures are in to prove it: close to half of all Australians say they feel more personally at risk of a domestic terrorist attack than they did six months ago, before the ISIS crisis began and before large-scale police raids on alleged terrorist conspirators.

So it seems that government security claims of a “lone wolf” threat and media misrepresentations about an alleged plot to behead someone have, indeed, inspired fear.

The figures paint a picture of an uncertain Australia, confused and unsure about aspects of the Federal Government’s moves, especially the prospect of joining a ground operation in Iraq. And while endorsing tougher new security laws, many more oppose (42 per cent) than support (30 per cent) the idea of gaoling whistleblowers and journalists for revealing what happens if/when these powers are abused.

These are some of the findings of an online survey of 1,000 Australians conducted over the last week by independent research and multi-media production agency, Factuality, of which I am a principal.

In broad terms, the survey reveals that the Federal Government is on a winner with its tough-on-terror domestic agenda: an overwhelming 79 per cent of people support plans to stop Australians from travelling overseas to fight with groups such as IS, and 68 per cent endorse giving ASIO increased surveillance powers.

Yet Australians are far less sure of the Abbott Government’s military moves in Iraq. Only a slim majority – 54 per cent – support the idea, with the rest either opposed or unsure. And Australians are deeply divided on the merits of having Australian troops on the ground – 39 per cent are for it, 38 per cent oppose it, and a large number, 22 per cent, are yet to be convinced either way.

Cynics may see a degree of opportunism at work over the alleged IS terror threat.

“Islamophobia represents fertile ground for anyone with a mind to fan and exploit tensions.”

A large proportion of Australians (56 per cent) believe Australia is now more vulnerable to a domestic terror attack as a result of Australia’s involvement in Iraq, and 44 per cent feel more personally at risk now than they did six months ago, before the Government ramped up its “death cult” rhetoric and actions.

And at the same time, even more people (62 per cent) believe that Muslims in Australia are now more likely to be attacked. So it’s a population on edge. And now a grateful populace endorses tougher security moves to make them feel safer.

Our survey shows that about one third of Australians perceive that the Government has acted opportunistically at the expense of the Muslim community – but many more do not see it this way.

Whatever the case, Islamophobia represents fertile ground for anyone with a mind to fan and exploit tensions.

While the survey shows that most Australians believe only “a tiny minority” of the local Muslim community represents a terror threat, it also reveals the suspicion which lies below the surface. A majority of respondents believe Islam is more prone to violence than other religions (51 per cent agree) and just 42 per cent consider it to be a religion of peace, with 34 per cent thinking it is not. It seems the repeated protestations of Muslim community leaders have fallen on deaf ears.

A large number of Australians do feel positive towards the majority of Muslims who live amongst them, considering them to be moderate. However, only a small majority (54 per cent) believes that Australia’s Muslims have made a positive contribution to the nation and will continue to do so in the future, with many unsure about this.

And an overwhelming majority of people believe Muslim community leaders need to step up and do more to stop extremism within their communities.

So weeks and months into the old-new “terror” reality, Muslim and non-Muslim Australia are once again at odds. Fear and suspicion have grown. Security is again at the fore. Islamophobia has mutated effortlessly into Islamysteria.

“By a big margin of 66 per cent to 18 per cent, Australians believe that their country’s non-Muslim and Muslim communities can live side-by-side in harmony.”

Yet there is evidence that it can be otherwise. Indeed there is a small glimmer of hope.

By a big margin of 66 per cent to 18 per cent, Australians believe that their country’s non-Muslim and Muslim communities can live side-by-side in harmony. The “unsure” 16 per cent is there to be persuaded.

Indeed, one of the outstanding features of this survey is the high number of people who are “unsure” (and undecided) about what the Government is doing and what is going on around them. They are unsure about the wisdom of military involvement against IS, unsure of the wisdom of laws to gaol whistleblowers and journalists, and unsure about whether or not the Federal Government is exploiting tensions for its own political ends – meanwhile, they are reluctantly supporting the present air strikes even though they will make us less rather than more safe.

In many ways it is the very picture of confusion.

For any political party with a touch of imagination, here is an important – and surprising – finding: rather than fund overseas military operations, a considerable number of Australians would prefer to see Australia pull out of Iraq and instead spend the hundreds of millions of dollars on reducing social problems that might give rise to extremism in parts of Australia’s Muslim community.

Forty per cent of people consider this a more effective way to make Australia safe. Only 26 per cent oppose the idea. A very large number, about 33 per cent, are unsure.

The finding suggests that people would prefer to see the Government make love not war – or at least attempt a social rather than a military solution.