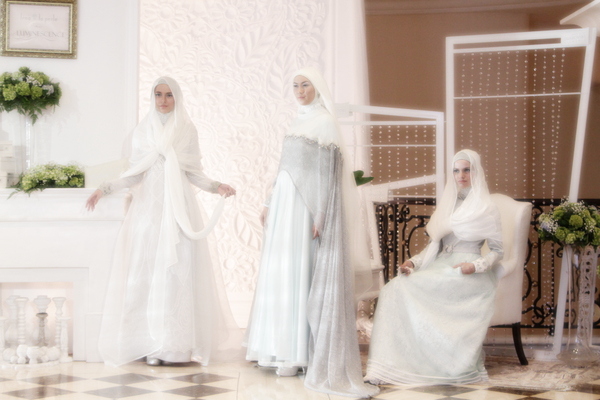 A trendsetter in Muslim female fashion, designer Irna Mutiara has showcased her new creations of glamorous, yet modern, wedding gowns.

Under her high-level Irna la Perle line, she launched her Luminescence collection, which was inspired by Edwardian fashion in the early 1900s.

“It was the post-Victorian era, when women got the chance to express themselves freely. In terms of fashion, it meant no longer using tight corsets and petticoats.

“The fashion got simpler with A-line silhouettes that ensured women could move easily and accentuate their dynamic, elegance, intelligence and nature at the same time,” she said at the show on Sept. 17.

For the collection, Irna used Swarovski crystals, pearls and sequins to give light to the simple, modern cutting of the floor-length loose gowns.

“The collection has an international look to it, with colors favored by brides-to-be in general,” she said.

The sartorial showcase at the ballroom of Hotel Gran Mahakam in South Jakarta came in three parts, starting with an array of gowns in H-silhouette.

The minimalist designs — fit for party garb and pre-wedding events — were dominated by silver, mint and purple colors on chiffon and tulle.

Next was the popular A-silhouette, cut above the waist in glamorous, semi-ball gown design for the brides. The collection came in cream-colored fabric, peach and light orange.

For the veils, Irna interpreted the side chignon with asymmetrical drapery on the organdy veil, while the veiled cocktail hat popular in the early 20th century was translated as an organdy long veil that also covered the neck and upper body.

The veils were in sync with the designs to keep the simplicity of the whole outfit.

Irna acknowledged she deliberately broke the golden rules in traditional wedding outfits to cater to the interests of the modern, working women wearing hijab.

She said that at first the management at Swarovski Group hesitated about the collaboration until they had the first look at the designs.

“I want to introduce to the international market that these are an Indonesian take on female Muslim fashion, which still abides by Sharia but is not necessarily Arabic.”

Irna’s signature was glaring in each detail, including in the accessories, such as brooches, bracelets, hand bags and pump shoes, as well as the decorations and furniture picked for the fashion show, giving a solid ambience to the theme.

Irna, who was named Top Designer of Indonesia Islamic Fashion in 2011 and who always uses pearl colors in her designs, also kept to her idealism in promoting traditional craftsmanship. The swirling sulam usus embroidery of Lampung, the 3D sulam cai embroidery of Bukittinggi, West Sumatra, and the intricate Tasikmalaya embroidery were applied to the fabrics.

“The embroideries, which are usually used in traditional outfits, turned out to be applicable for modern fashion and gave the gowns an Indonesian feel.”

Irna said the collection was available in ready-to-wear as well as customized, with prices starting from Rp 2 million (US$164) in her Irna la Perle boutiques in Jakarta, Tangerang and Bandung, West Java.